Hacksaws and grinders; hand files, some emory, and a little one at a time at the vise.  One of these days I'll figure out how to set up the lathe for mitering. 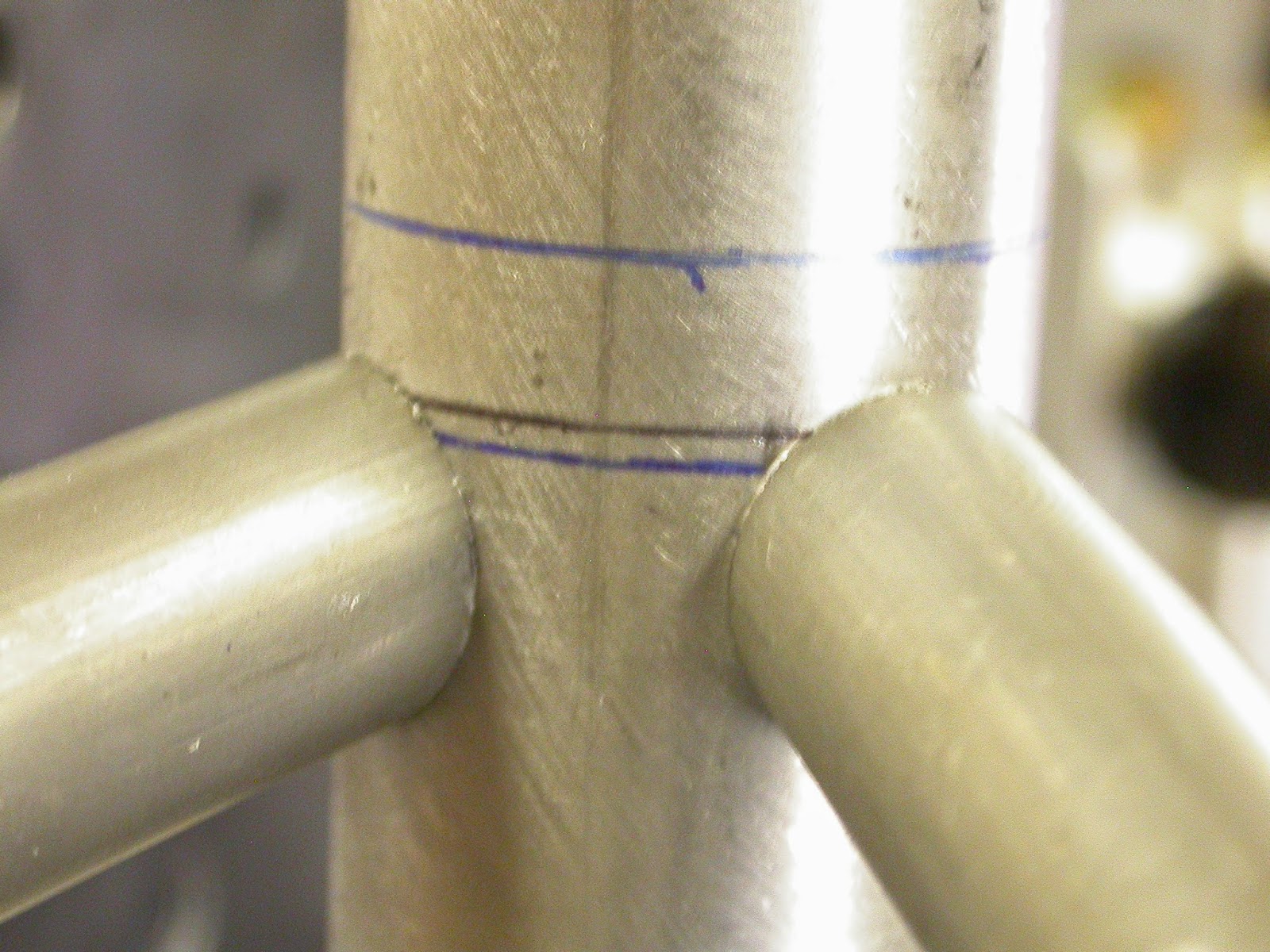 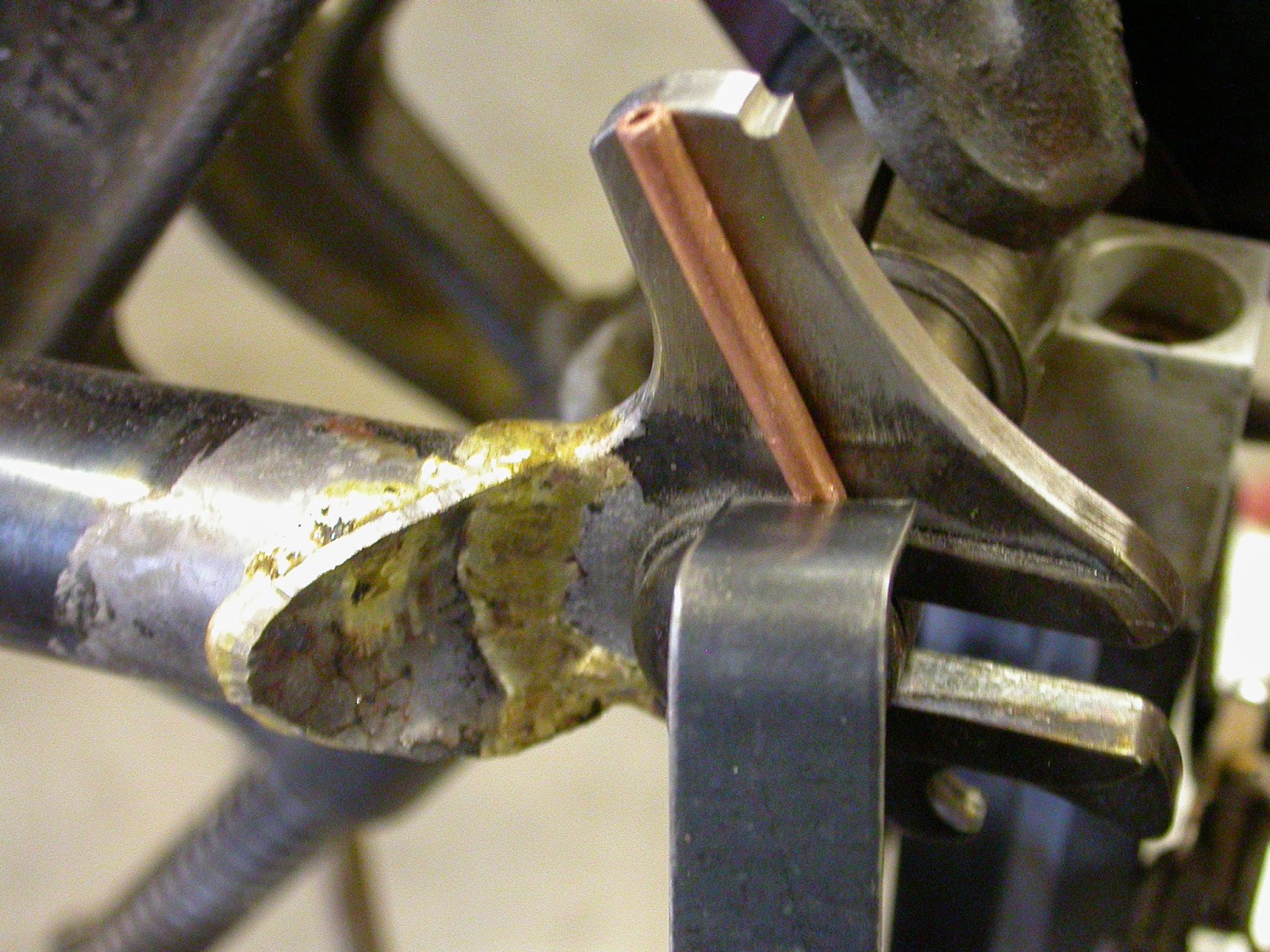 Its a breather hole that is not drilled into the stay 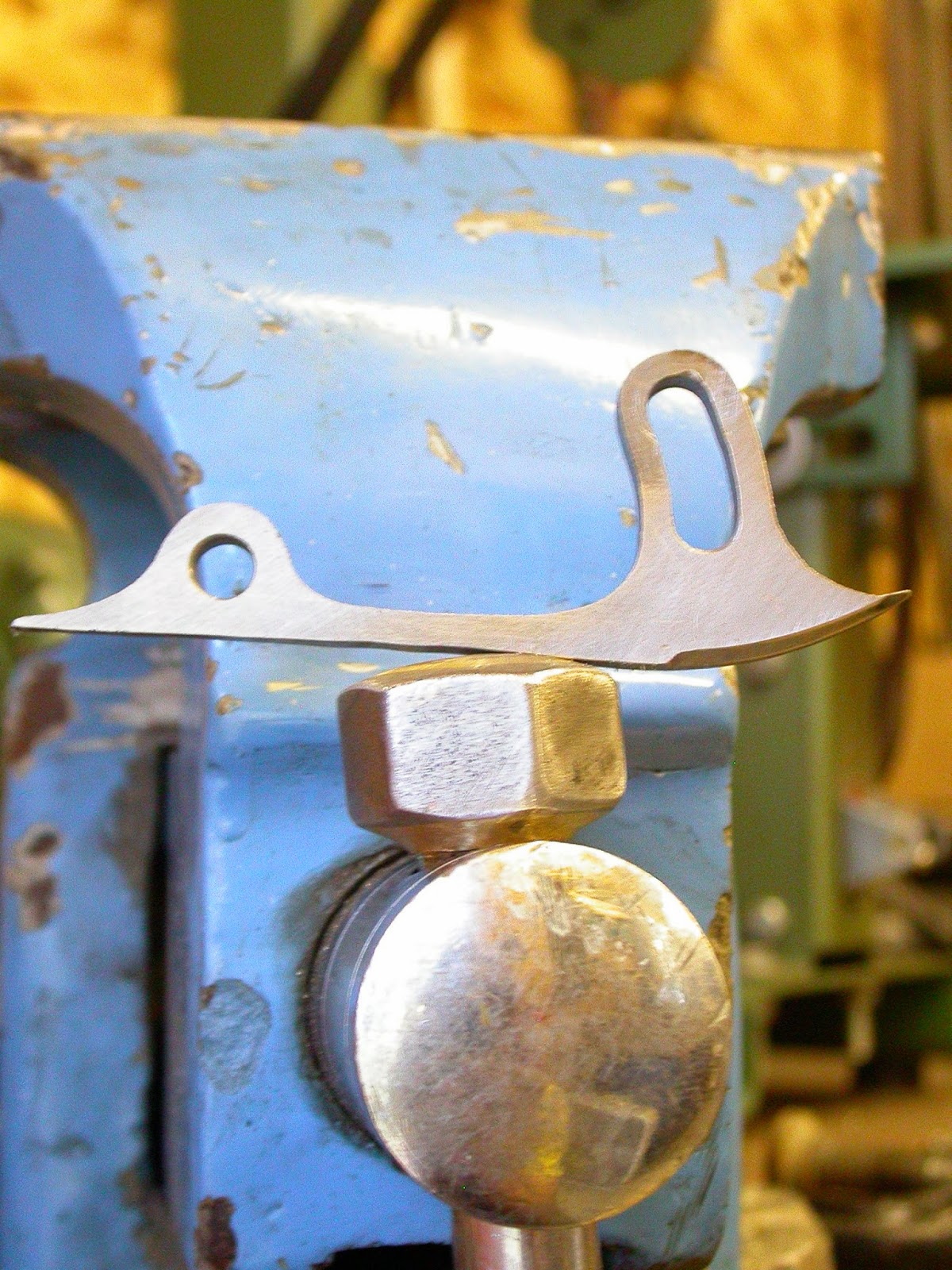 The duck understands the concepts of "float" and "flight".....important when one's duty is regulating the back wheel of a hard tail that'll see many many miles. 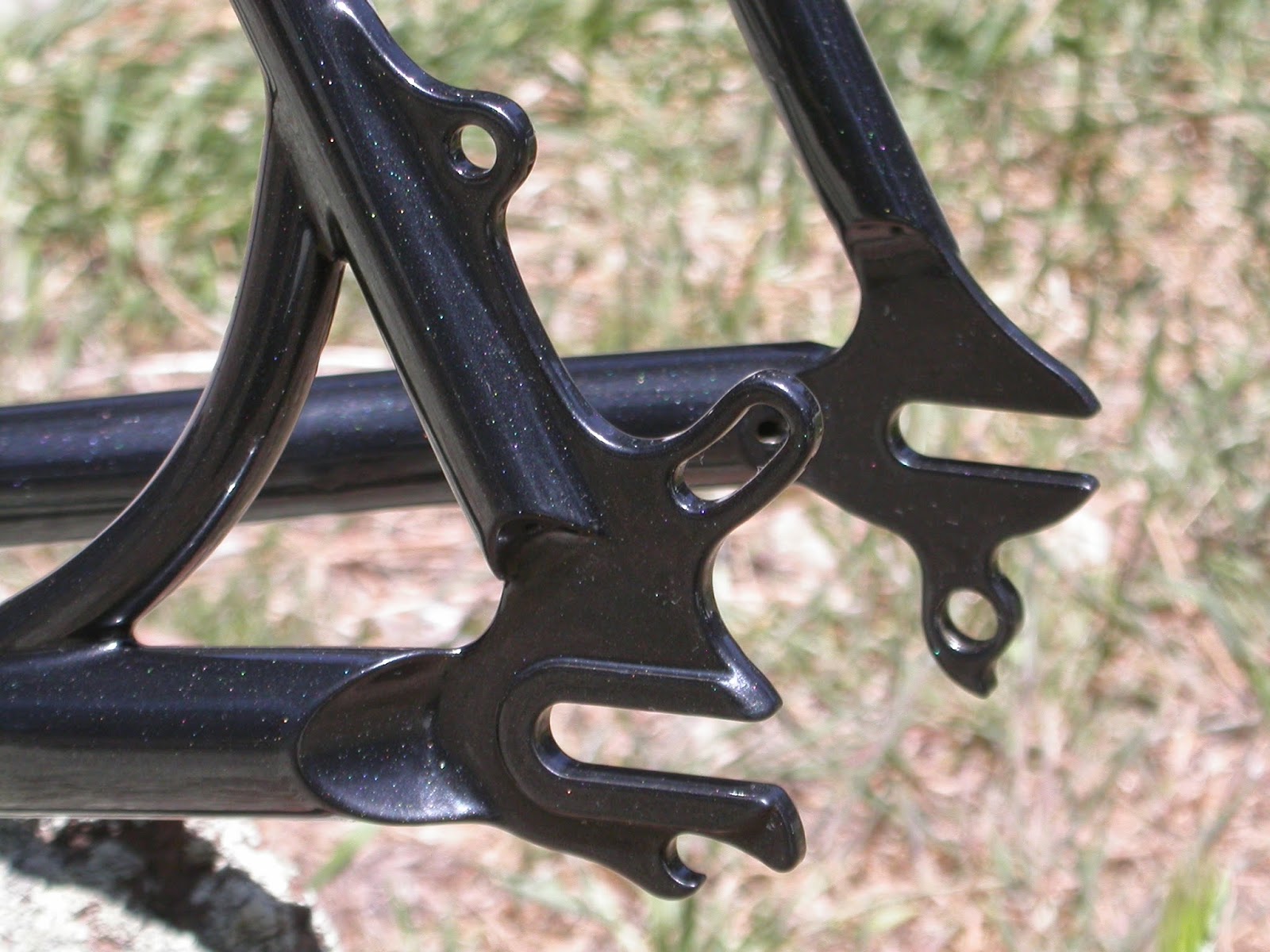 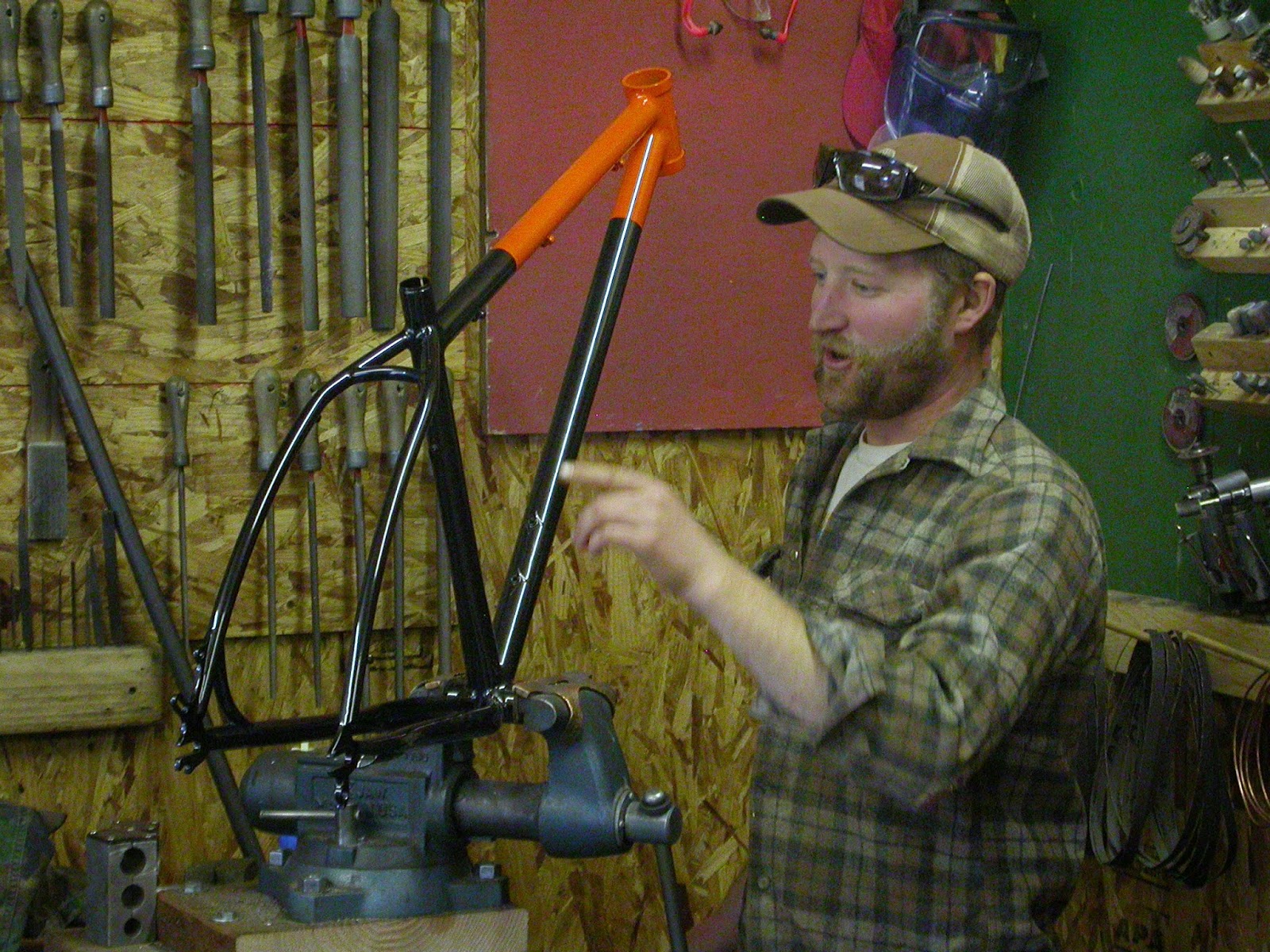 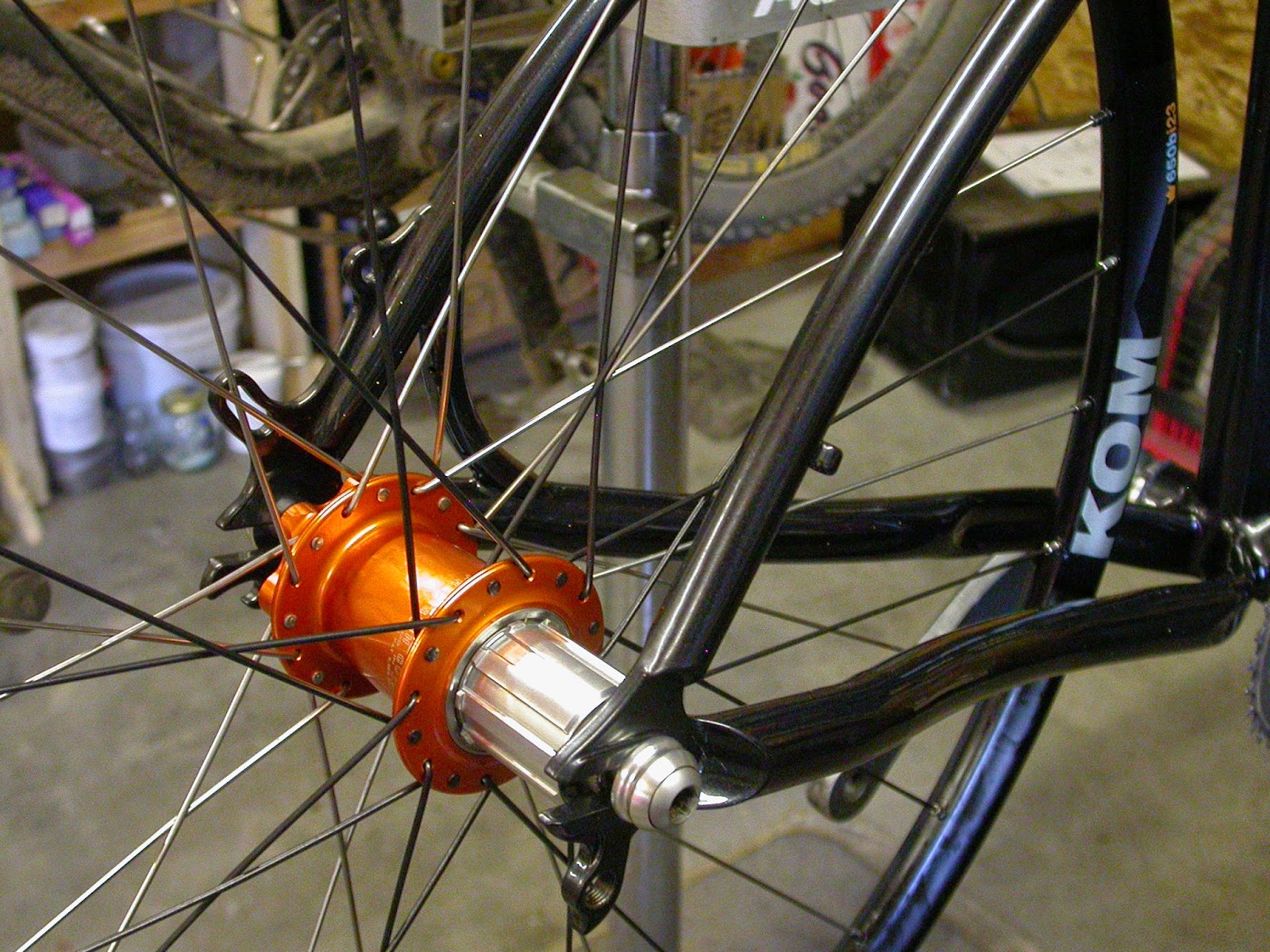 I got to lace up some of the new WTB KOM rims...very nice. 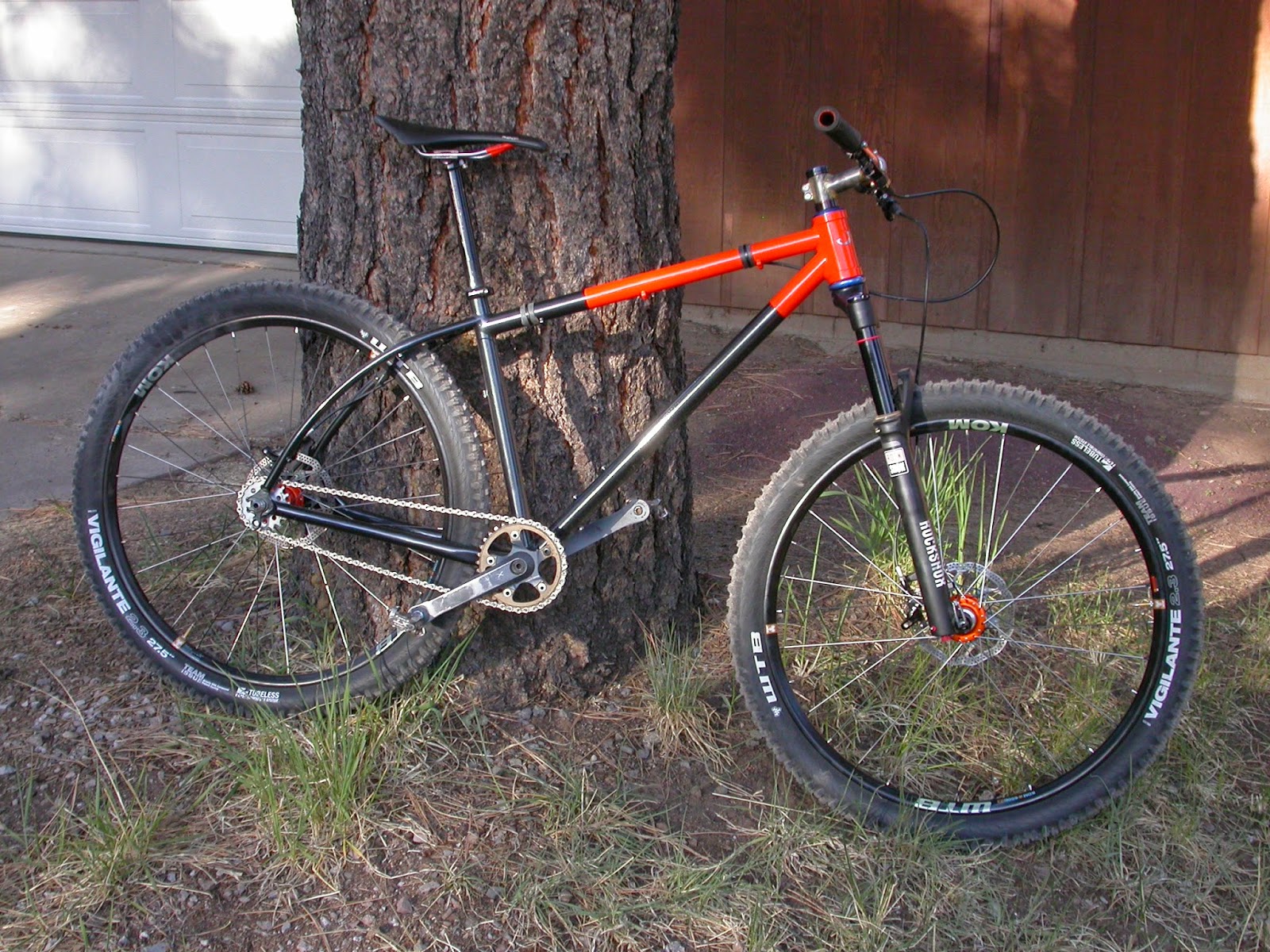 Singles Speed Flagstaff style....don't let the parts you don't have keep you from riding your new bike... 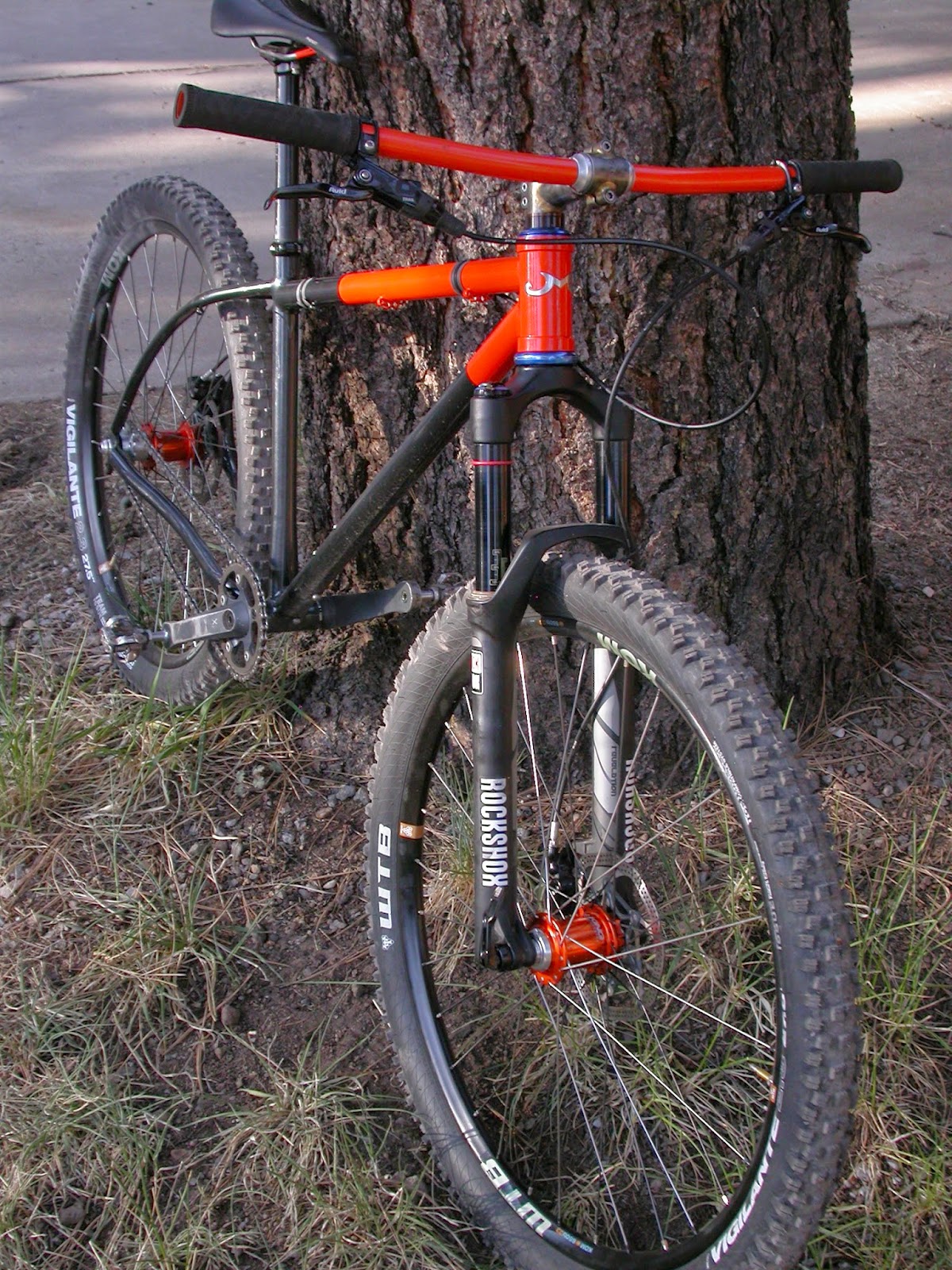 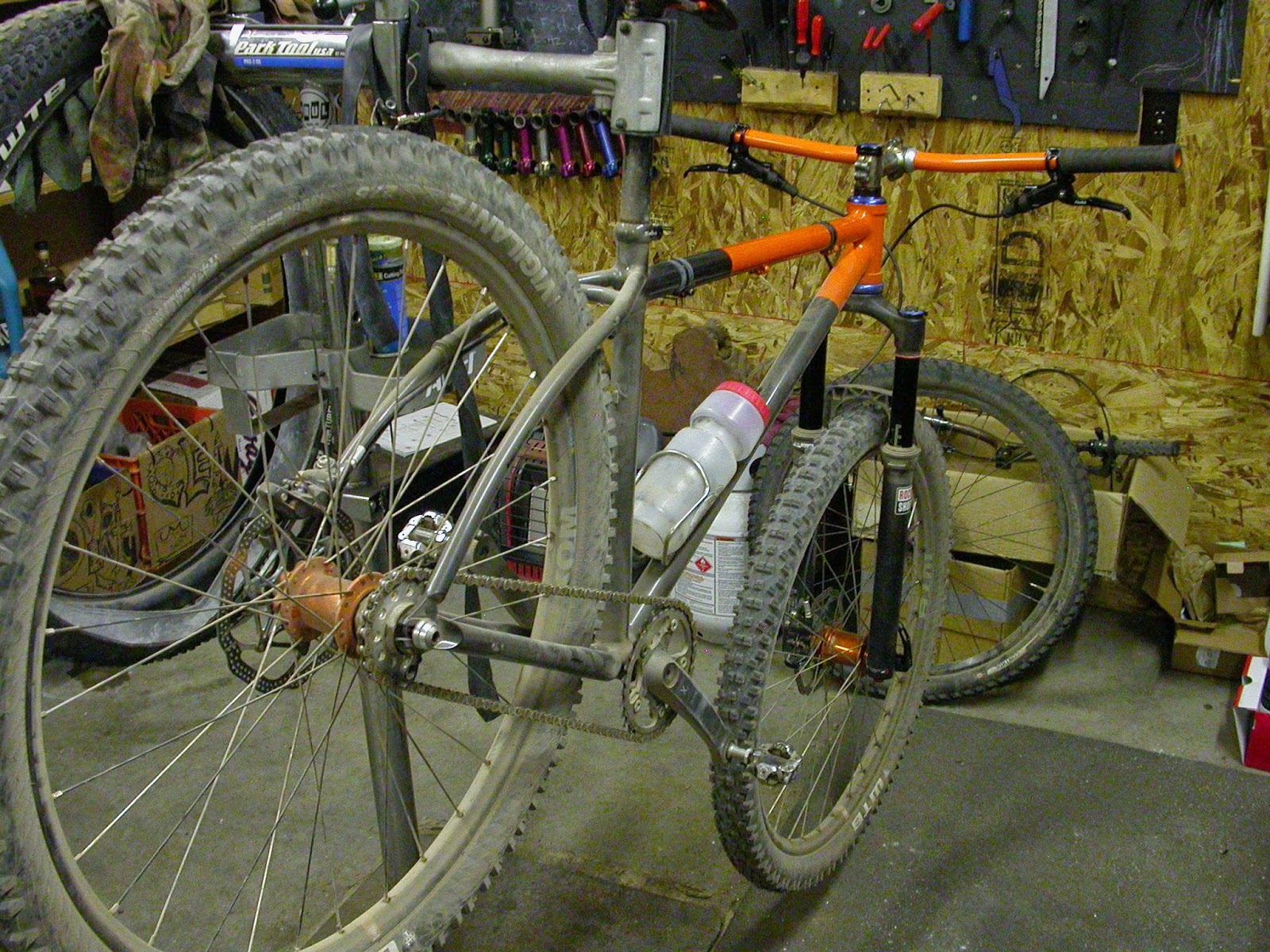 The paint scheme is supposed to represent re-entering the atmosphere....The rider has been out in space for a while enjoying some future bikes.  Hopefully his return to earth has let him realize the advancements of the '90s.  Enjoy your new bike, Blair!

....My apologies to all for not putting out flyers for this year's event.  It warranted the smallest turnout to date for this Beaster Sunday celebration of all things feral on Mount Elden, though the spirit of past rides was loyally carried by eight returning goats.  Our annual tradition was overshadowed by an event much grander in scale and planning--The Big Zona Burlesque's Big Show.  It rightly robbed our ride of regulars who triumphed in a night of risque stage performance last Saturday night, showing off over a year of hard work by the many and diverse dedicated talents of our fine town.  Only one stage performer dared show her face on Sunday's heated bike battle, and both stage hands I might add, but all who did the ride were in attendance of both the Big Show and the after party.  The night's reigns were felt on the climb up Mount Elden by many if not all in attendance.  We set off without much a plan for the top of the mountain and a familiar starting point for the last five years.  There would be racing and a traditional start, Shotgun LeMans, but what?, leading to where?, we could not answer.  It was the year of the people's choice, and Blair's Birthday Baah. 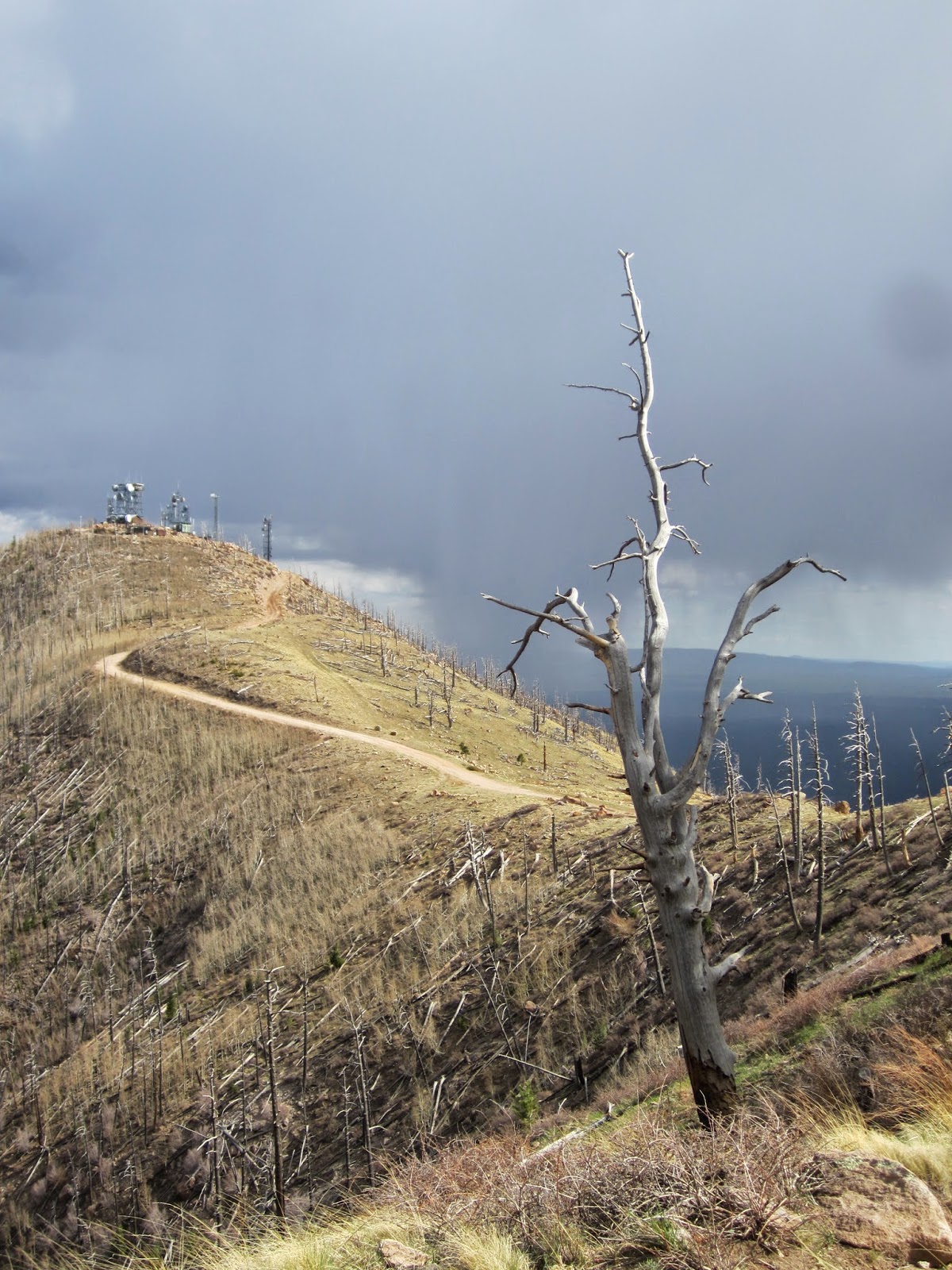 The cake that emerged from Judy's pack at the top of the hill managed to pull peoples' eyeballs from the depths of their skulls.  The sugar seemed to stave off the general feelings of nausea.  Packs were heavily packed, and the load began to lighten as eerie spring rains encircled the mountain we sat atop.  It was warm and calm, atypical of this time of year, the familiar cold spring wind absent from our day.  We decided on a course...new to this event...it would take us all the way to the lookout tower for the start.  As you can see in the photos the course starts in a steep dirt road downhill that quickly turns uphill and then onto an extended section of trail known as the catwalk.  We decided to race the catwalk to Sunset trail down to the meadow and intersection with Red Onion. 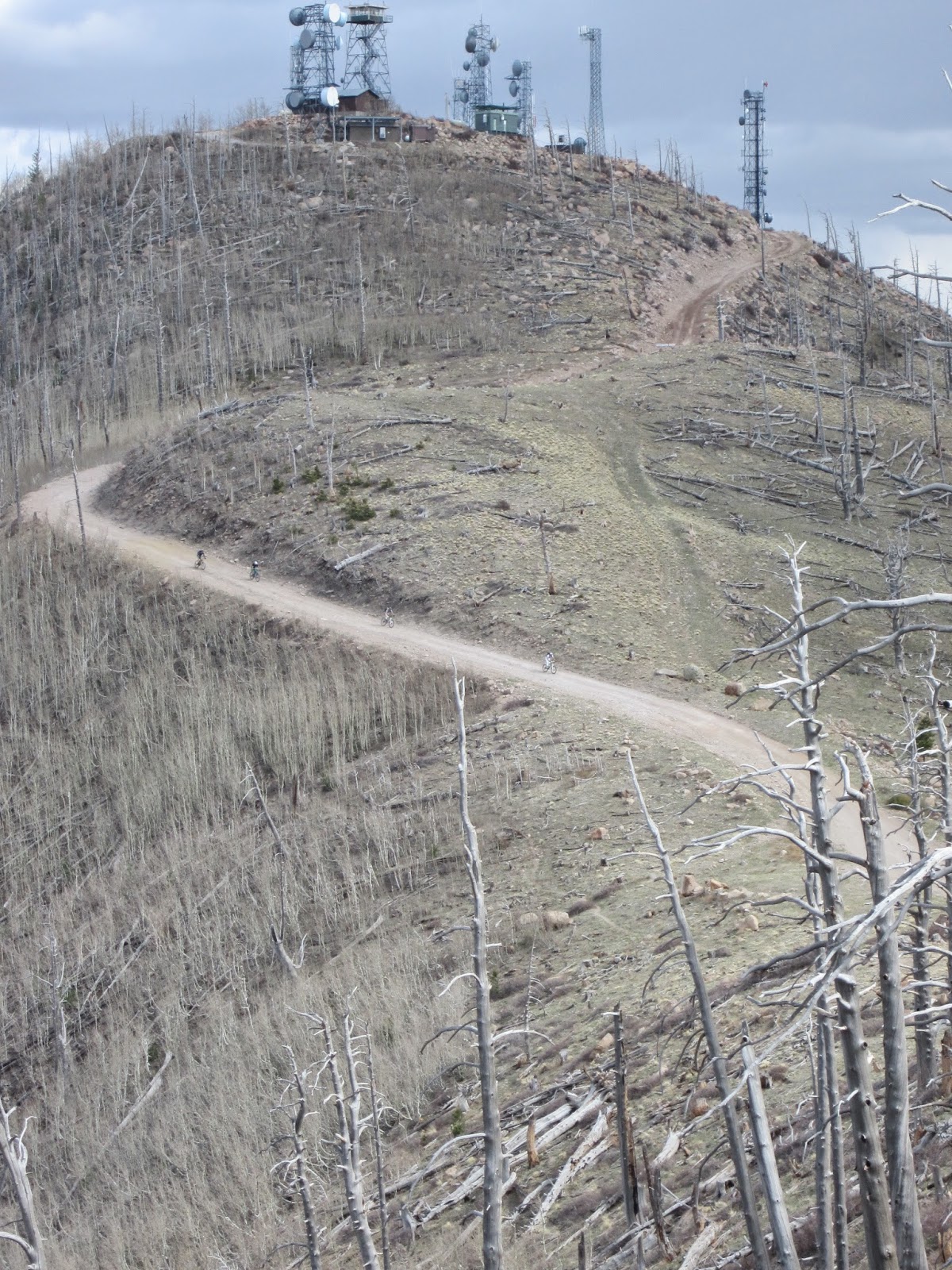 Typically the Baah is won and lost in the shotgun, and it has been those able to put this opening beer down, keep the burps down, and get down to riding that have won.  The (theoretical) trophy bears only two names from four years past, thrice of Mr. Heinchez, once of myself. But...there has been a challenger on the rise, putting up a big money run for the last two years....Austin, AKA, ????....wait this dude certainly needs a cooler name for this blog than his real name.  A close-up zoom of the above photo would reveal the positions for the hole-shot.  I pulled off an early gap in the guzzle and turned downhill.  It would not hold.  By the time the road bottomed out Austin, Heinchez, and Reverend Sham-pain would throw an attack into the climb that I could not answer. 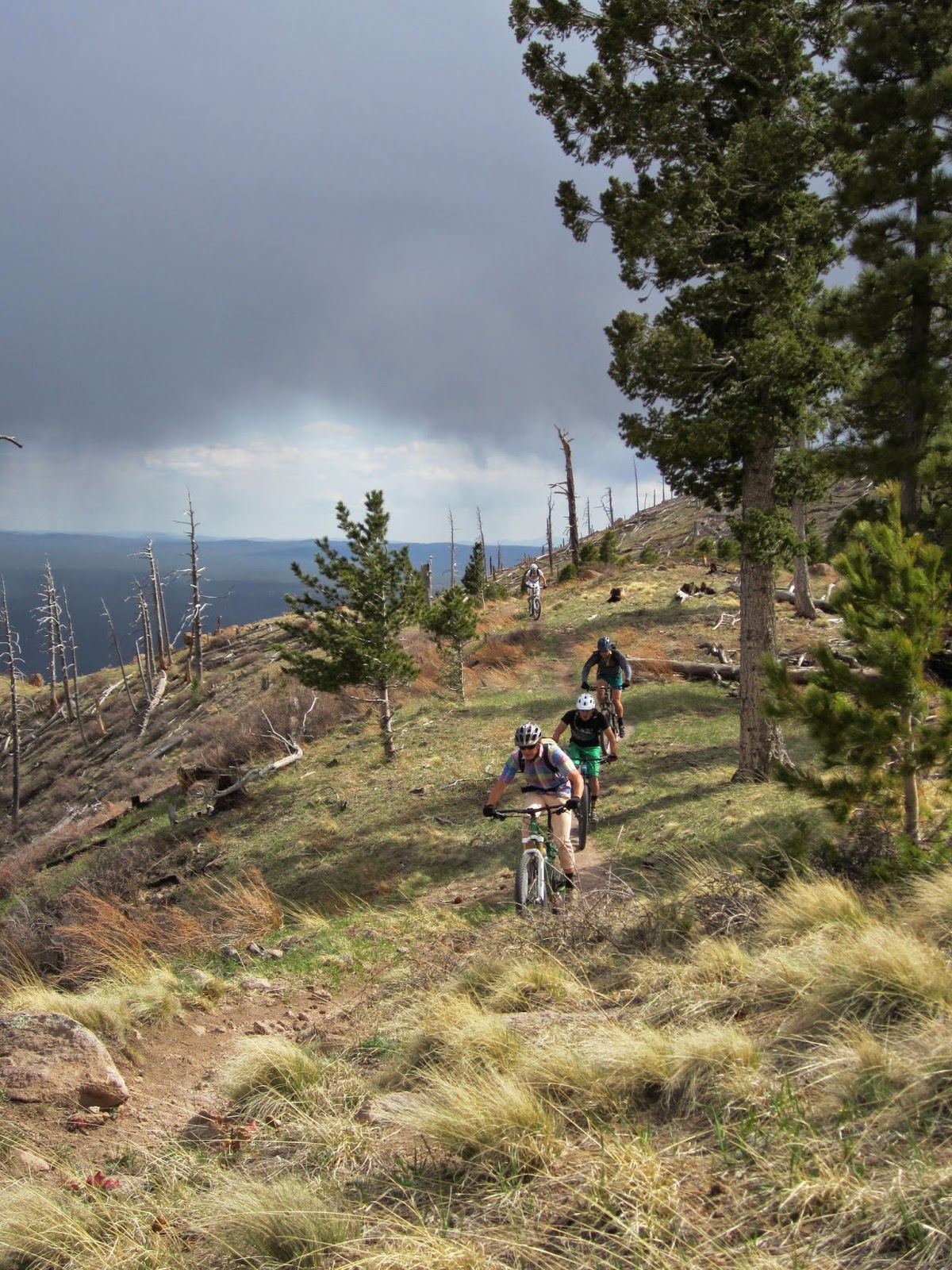 A close look into the faces of the riders at this point would reveal no smiles.  A strange lull in speed of the lead group led Reverend Sham-Pain to capitalize on the hesitation as the others paused to hold back the heaves.  The reverend took charge into the very rough singletrack downhill.  It was his to lose, but none of the group had been up here this year, and the spring blow-down would inevitably turn the race in favor of the challenger as he followed the reverend down the catwalk.  A downed tree looked deceptively impassible.  The Reverend opted to go around but this was the deception, as it did not pass and left the Reverend hiking back to the route.  Austin opted for the direct line, and though admittedly sloppy, the log was hopped with a clear passage, allowing him to put on a lead that would hold for the rest of the race even while crashing near the finish.  In his third attempt at the Baah, we have a new champion! 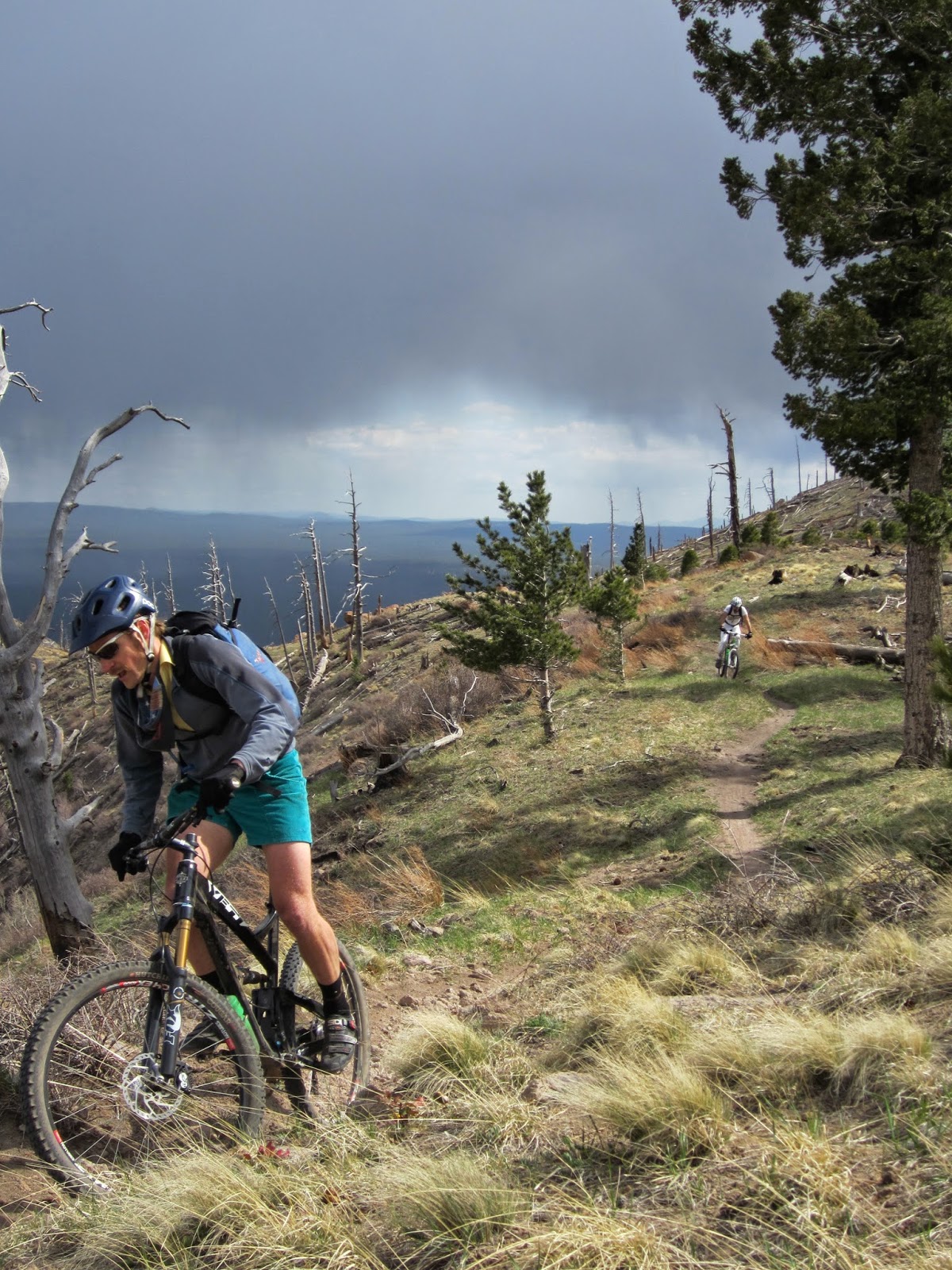 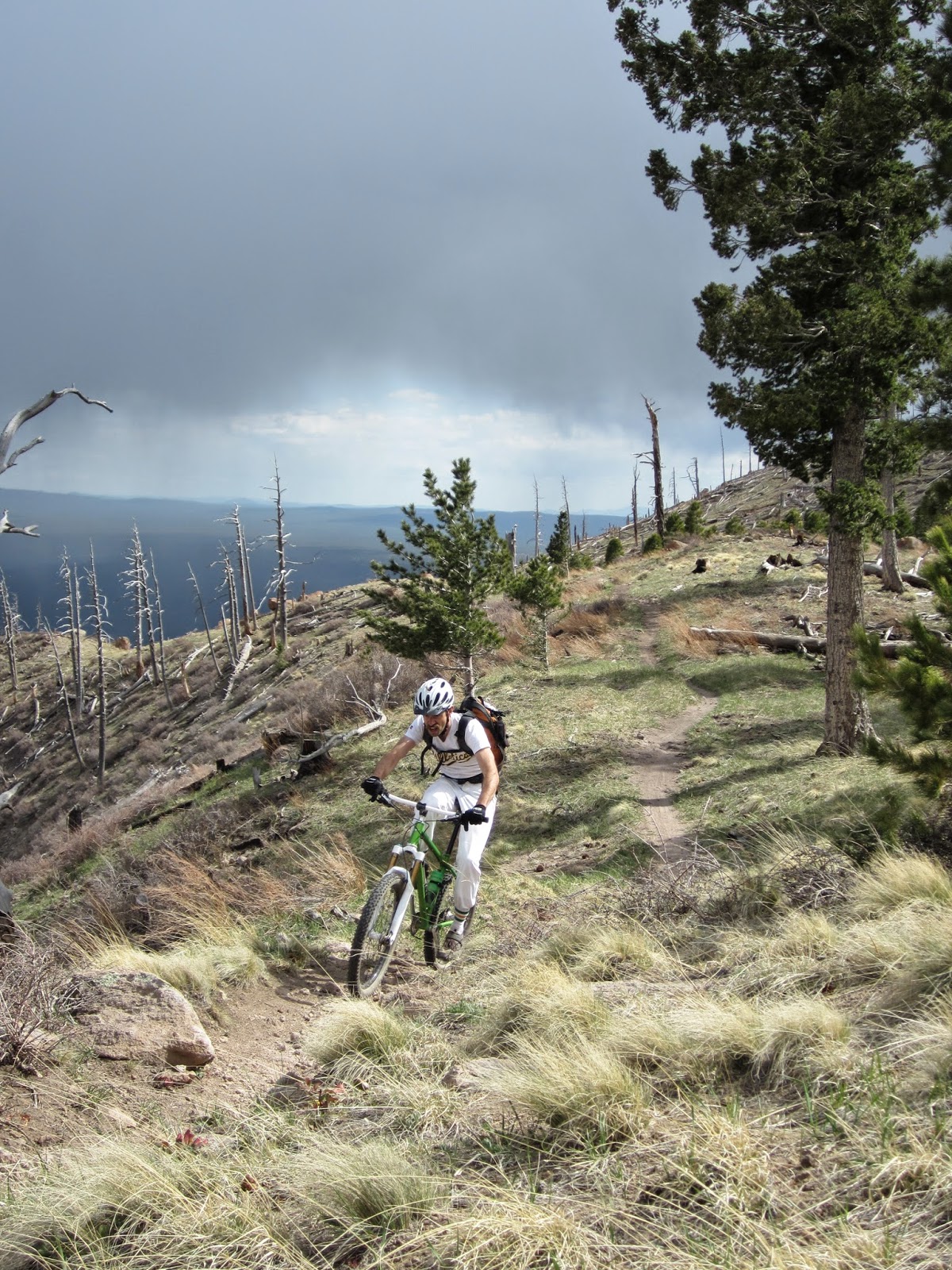 The remaining riders, realizing that the race was over long before they arrived anywhere resembling halfway down the hill set back to enjoy the atypical spring day.  Positions were jostled without care.  Stoke for the day was exceptionally high.  And a new bike saw her first ride down the challenging terrain on Mount Elden met with grand encouraging smiles by her rider. 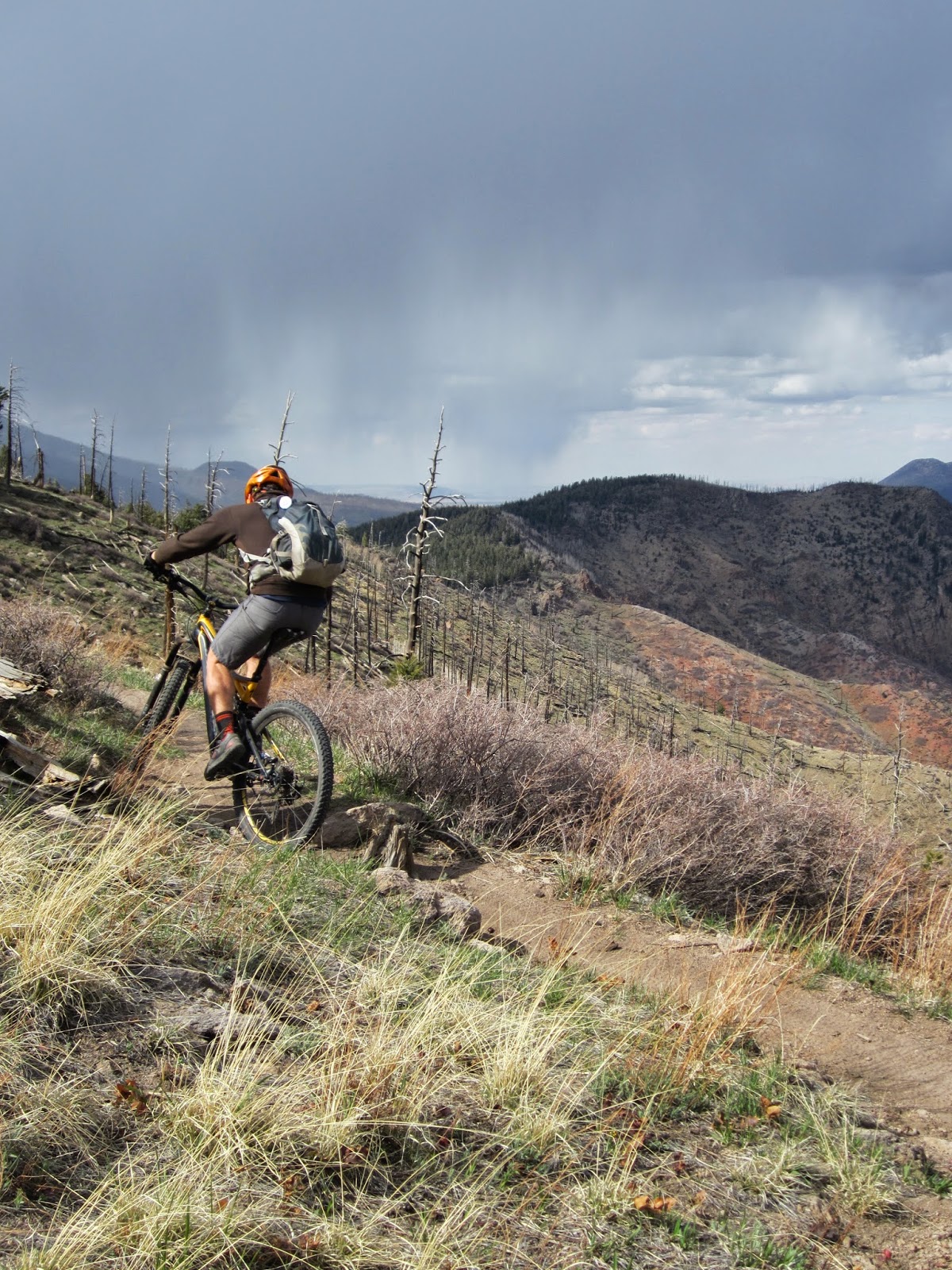 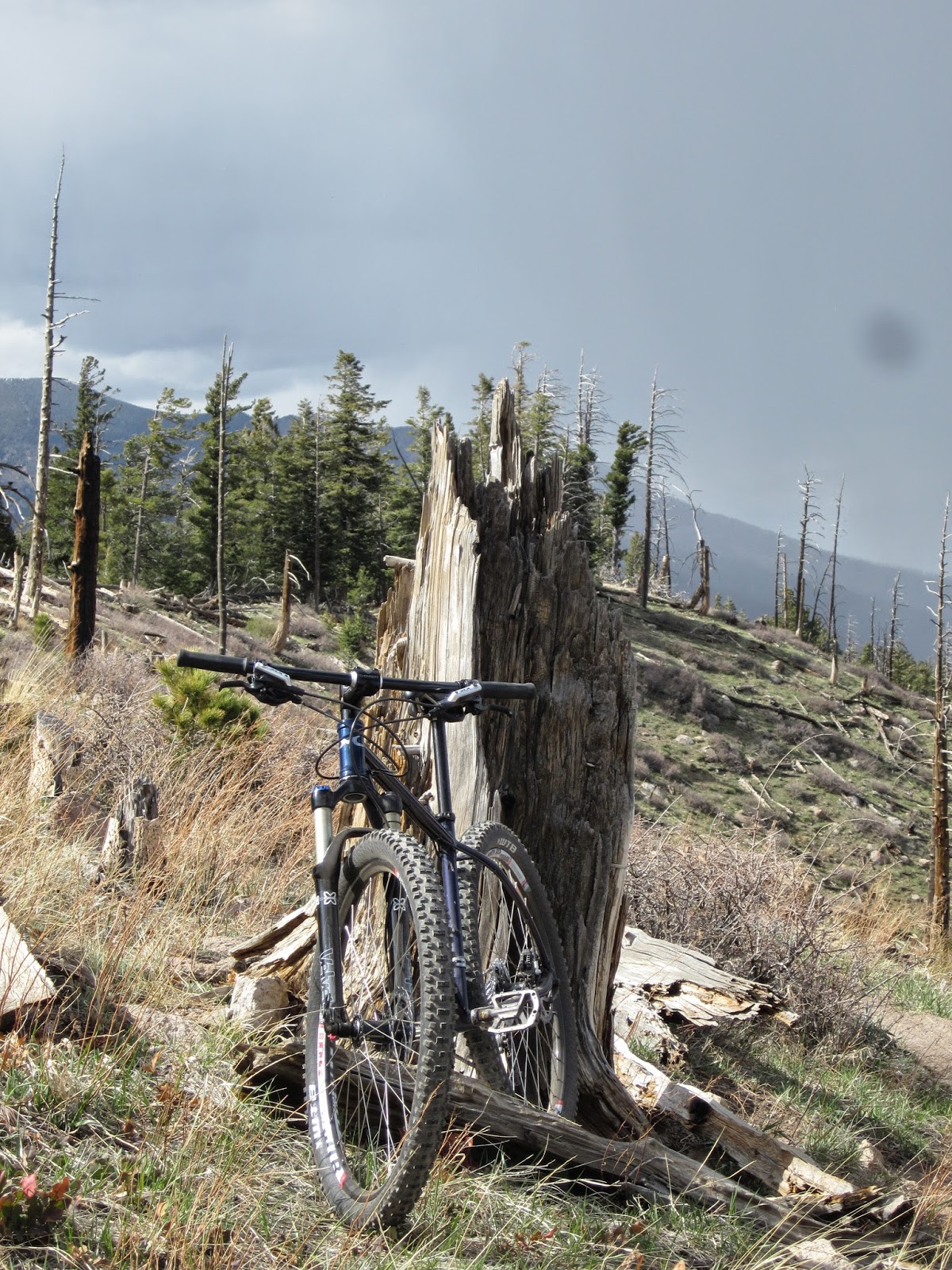 There was talk of making it a stage race, all stages featuring the signature start.  But by the time we had all finished the stage that talk had ceased and the remaining weight of the pack was whittled down stop by stop through the rest of the ride.  We had quite a bit of downhill still ahead, but the difficult parts were now behind.  It was a perfect day, and all there was left to do was ride.  And tired though we were, none of us wanted to stop. 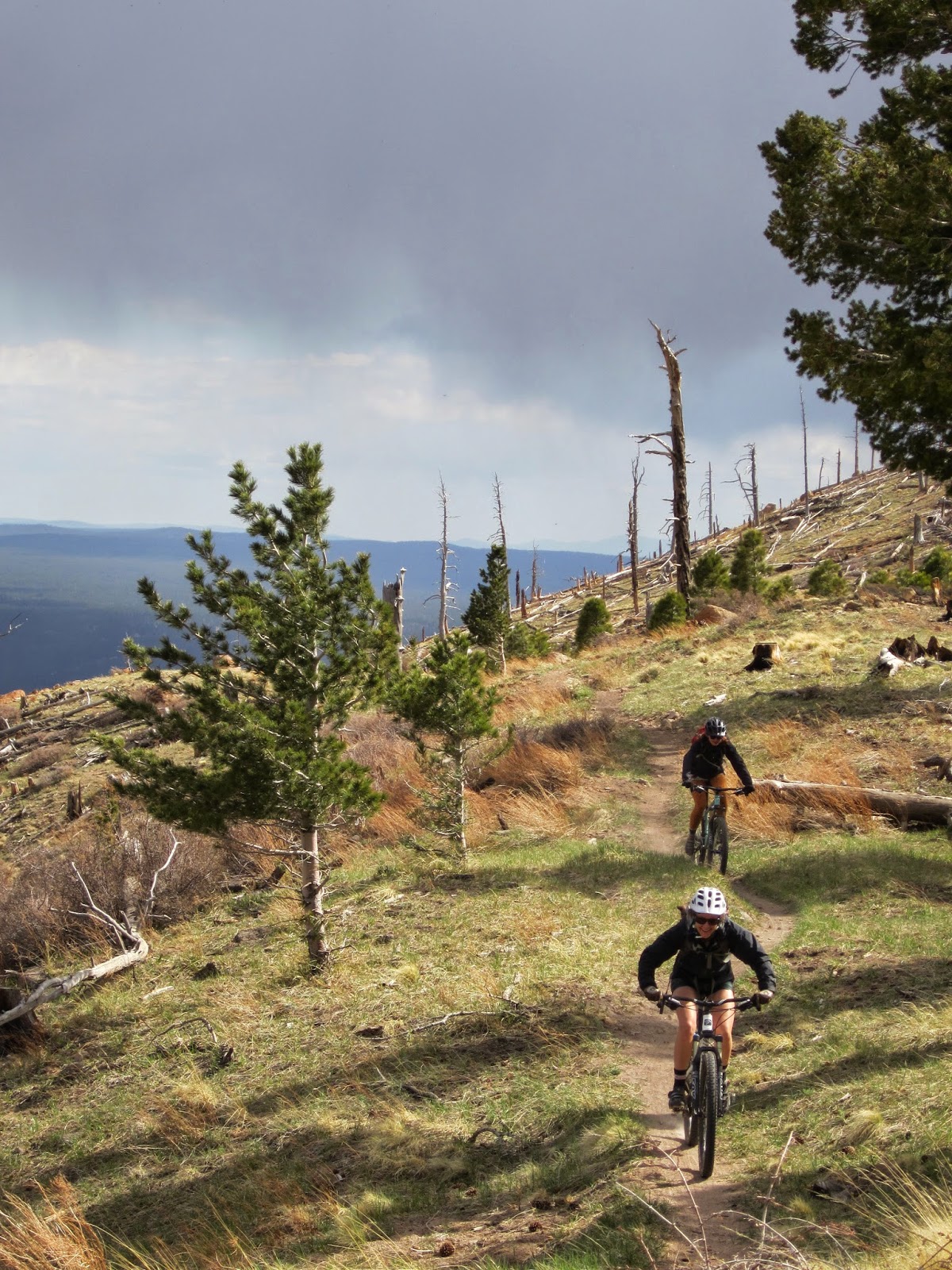 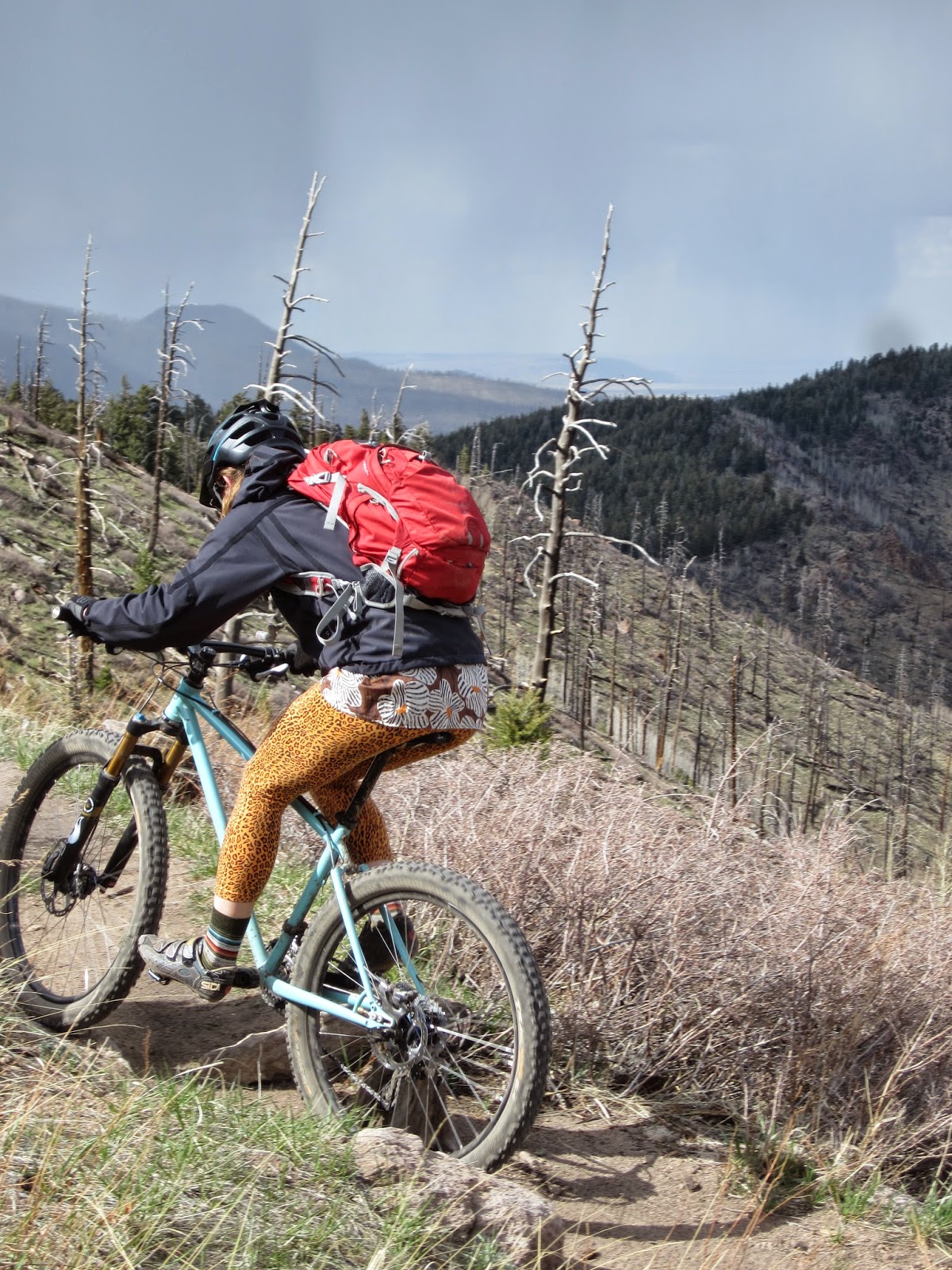 So I finally got around to making my special lady a bike....we've been massing the parts for a while now, and making notes of the setbacks offered by her former steed.  This one has the last main tubes of the old stock of Prestige tubing...they were just barely long enough to make a 650B downtube and they are ribbed....fluted I guess you could say. 1/10th millimeter variations in the wall concentrically around the top tube and down tube with a symmetrical and long butt profile.  The "up" ribs are .8 mm, the down ribs are .7 mm. 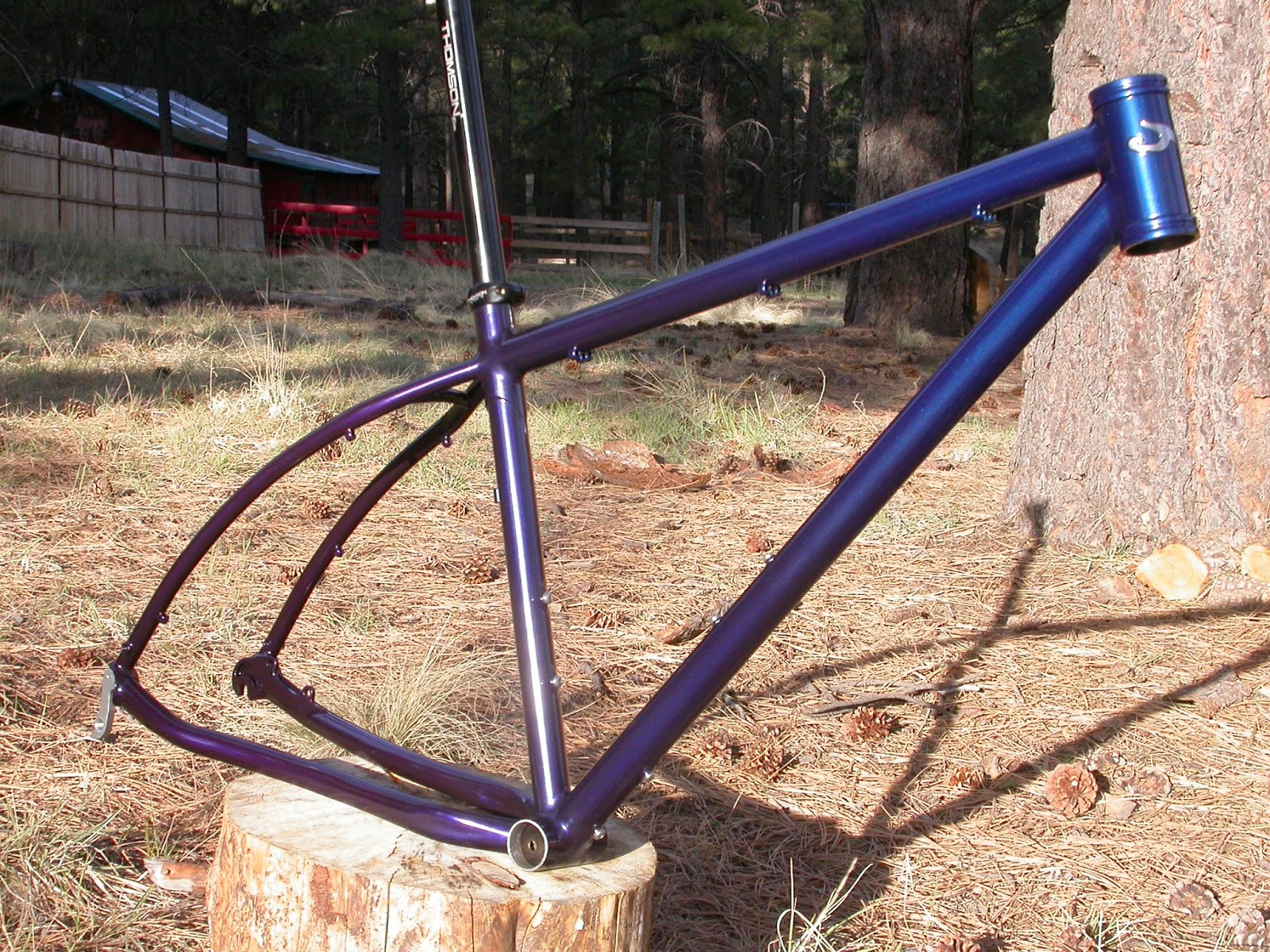 The booty of this beast is all straight gauge aircraft tubing bent up in house.  Nick at Iron Horse did me a solid on the paint....I was going for a concept I called the midnight fade, but it ended up looking a lot like Shrek's girlfriend.....or a midnight fade. 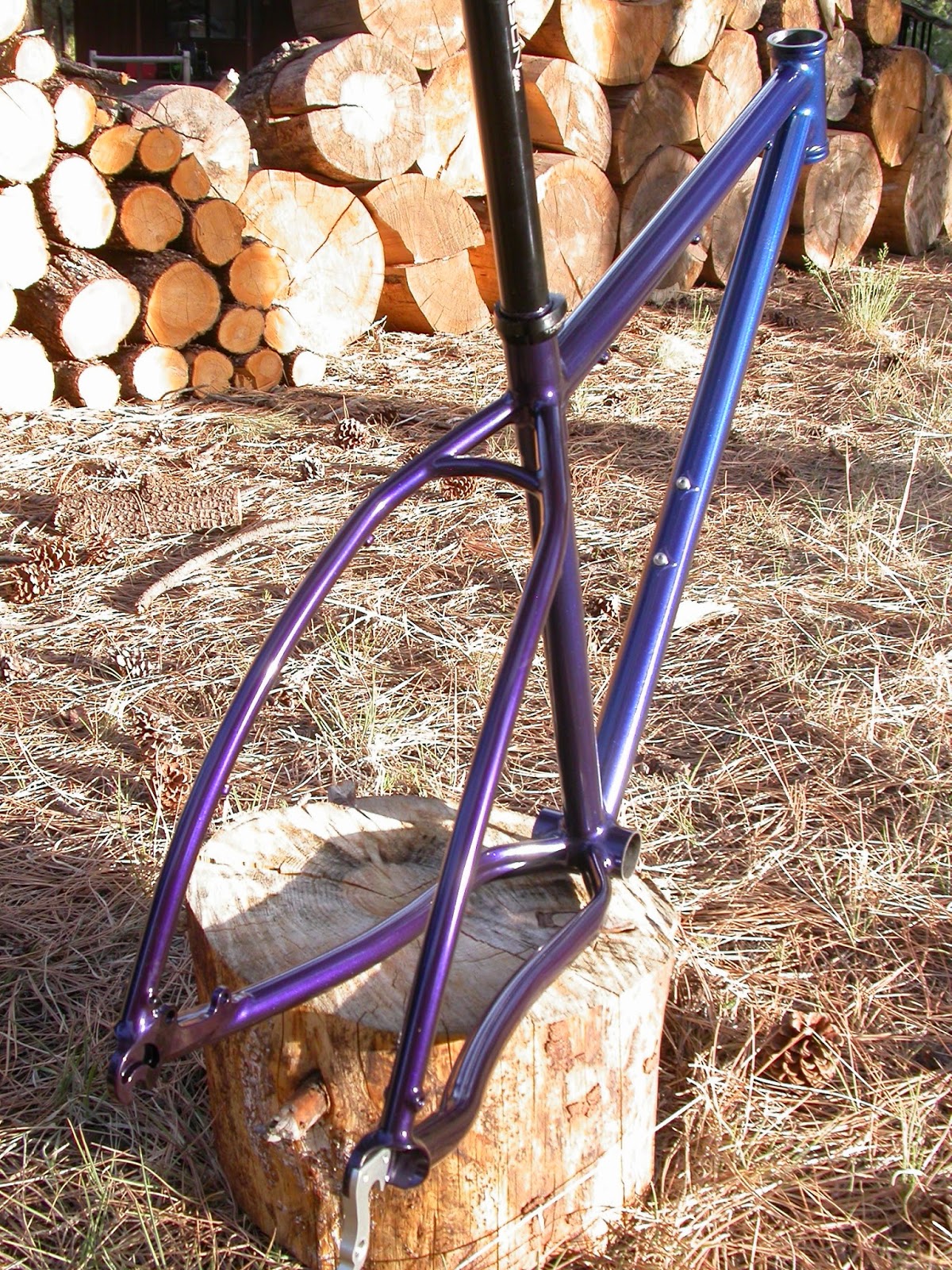 First bike to feature a product of the lathe....44mm head tube rings.  I will never again think or speak of the way these were made before.  And as Paragon expands their selection of machined head tubes to include more and more sizes, they may altogether become a thing of the past.  Amen. 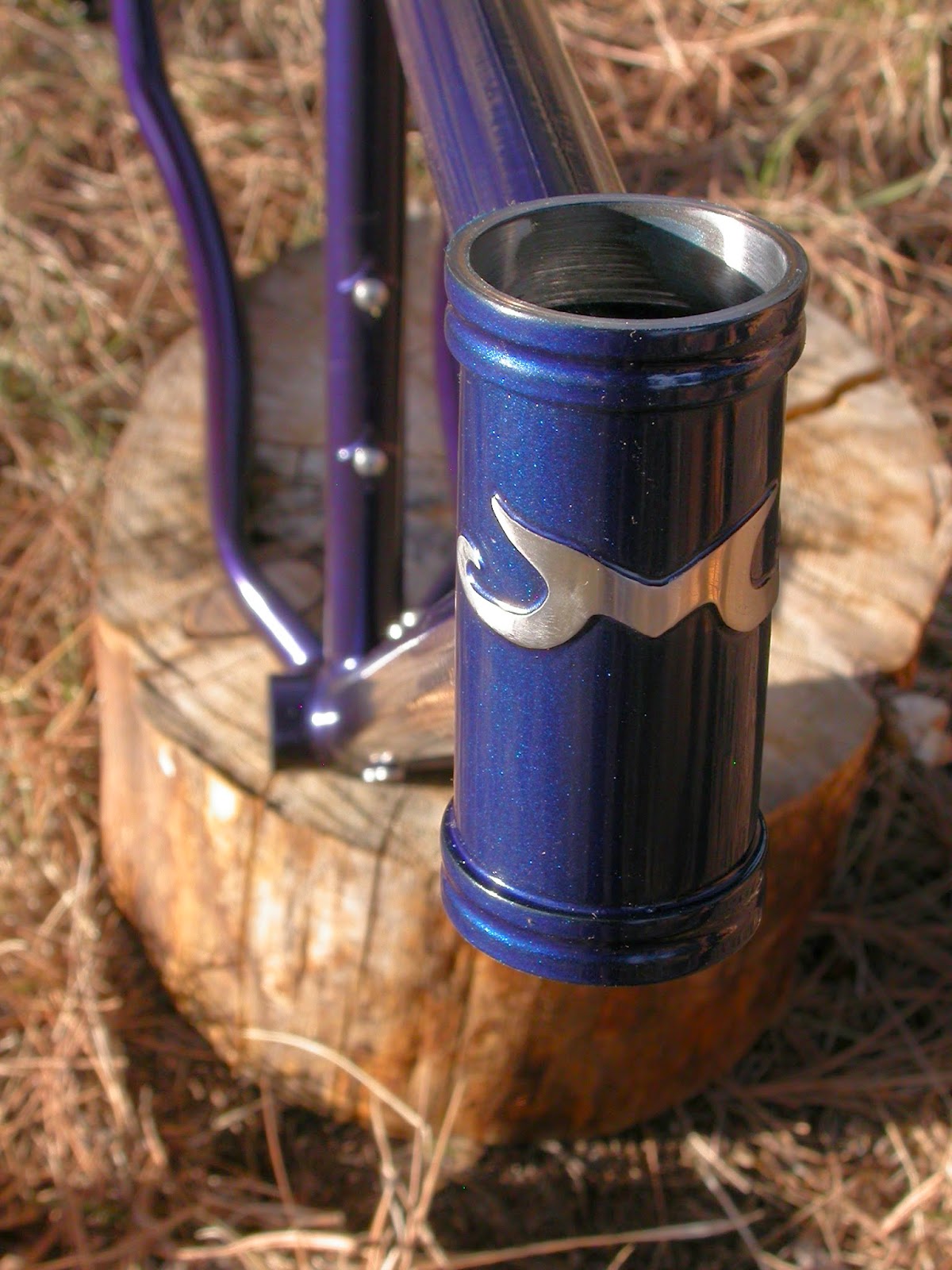 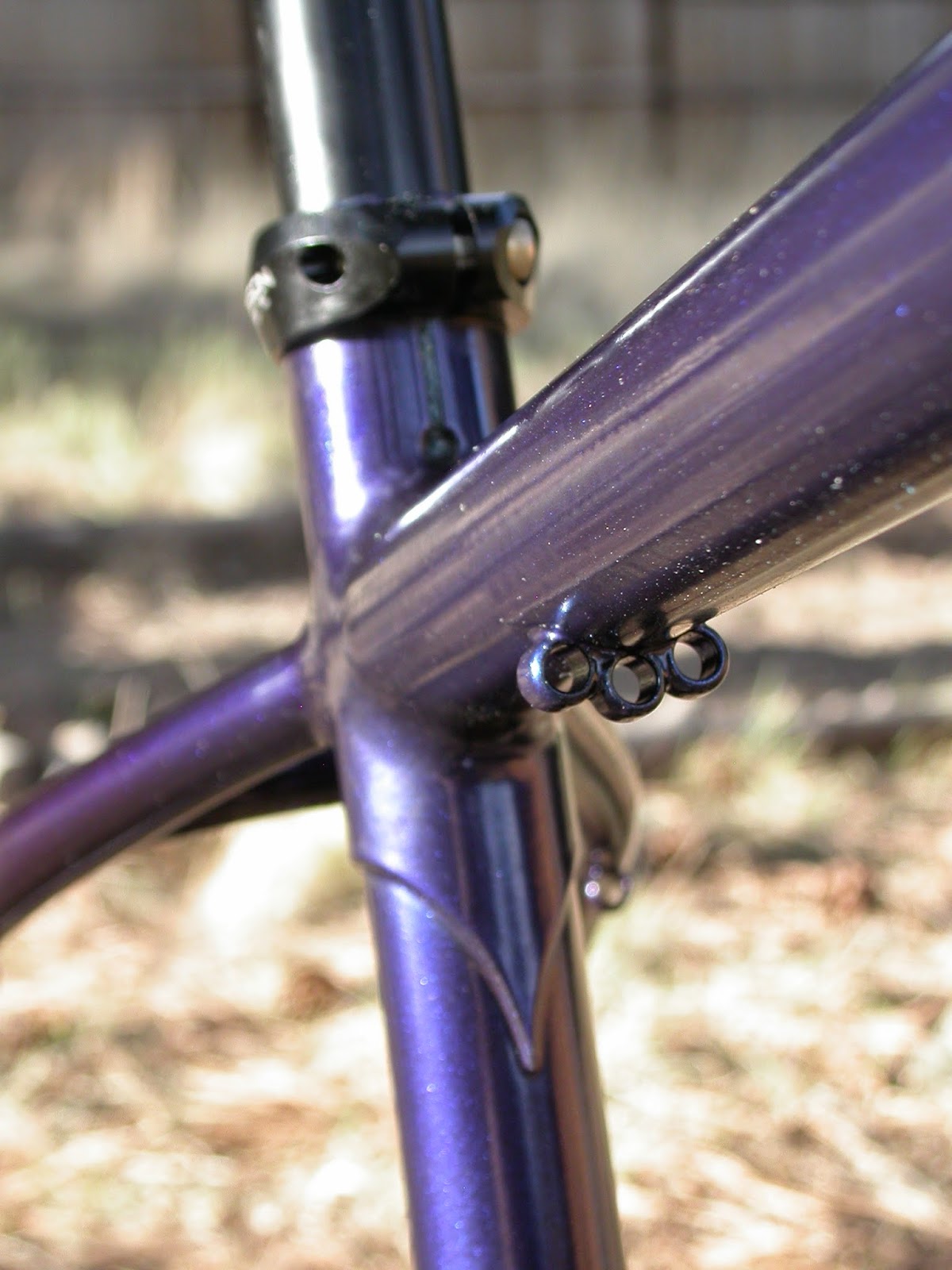 This thing came out smooth! 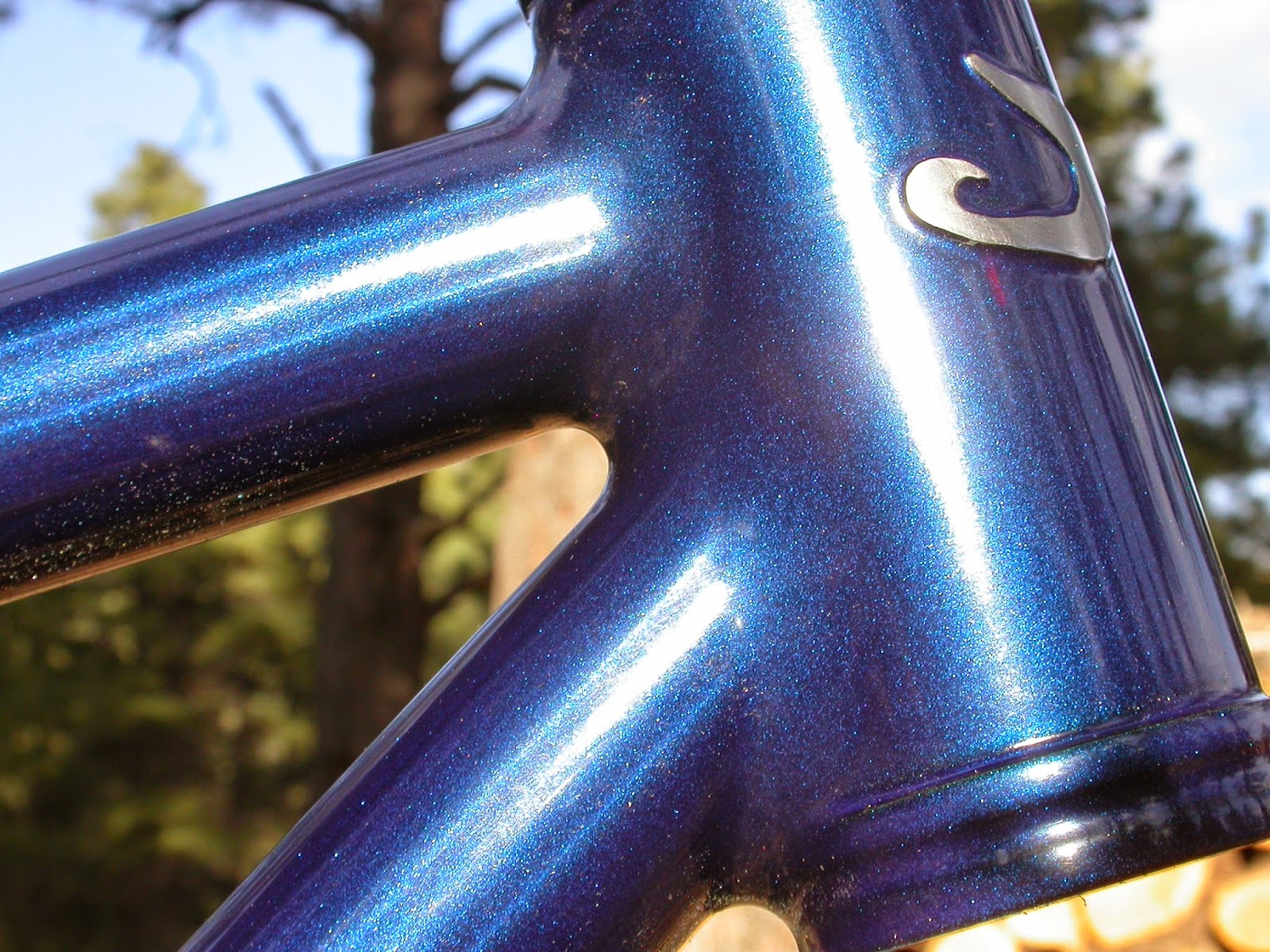 Hope to have it built up this weekend.