This bike has been brewing in my head for a long time.  Its finally coming into form but it will probably take a while before its done.  I've never done something so demanding in a frame.  Michael the Boy told me the name for a bike idea and I immediately knew who the owner would be (Boy...Do you have any more bike ideas for me?).  Odin is the commonly accepted English spelling for the ancient Norse god of war and spirits.  This bike is going to reside at the VIKING RANCH and will be ridden by the VIKING himself.  This VIKING is fluent in the arts of medieval weaponry with a particular regard to slaying zombies.  In his collection are numerous battle axes, a crossbow mounted on a turret that fires 1 inch steel rods across the yard, a full size trebuchet, numerous clubs and bits of armor....etc.  I'll have to make a trip out to the ranch for some proper documentation.

The bike to be will certainly be pounded on.  The original request was for a 29" single speed with my standard options of versatility, but knowing the VIKING, this would have to be something extra special. He's about 6'3", can weigh in at up to 220 or so, and is trials inclined.  His riding style involves power moves resulting in nose wheelies, rear wheel hops and manuals as much as he can find excuse for.  The chainstays would have to be short to be able to keep this bike performing like it should.  So I start here with the drive side chainstay.  To keep the option for full gears as well as clearing a 2.5" tire with room to spare and tucking it all into 420 mm stays, I decided to fab up a yoke of sorts for the drive side.  Its made of 3/16" plate chromoly and will be shaped and added to as I get a little further in.  This configuration will cause the front derailleur to rub the tire in the granny ring, but the dropouts have an inch of throw that should take care of that. Or you could run a skinny tire (?!?).  It would be nice to see a 2 chainring crank say 28/40 that places the two rings as a middle/big ring from the BB.  The chain line would be a little off but those 142 rear ends are starting to look nice too. What ever happened to adjustable chainline and different length spindles?  For some I guess square taper is an option but not for this one.  Both stays otherwise are made of 7/8" straight gauge bent and squished for clearance as necessary.  Here's some pics of the bending and fit up of the chainstay assembly. 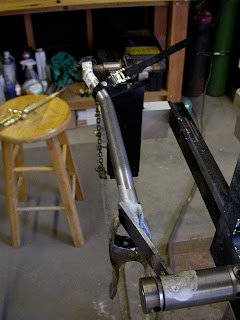 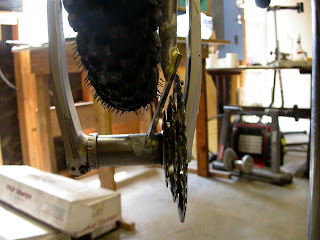 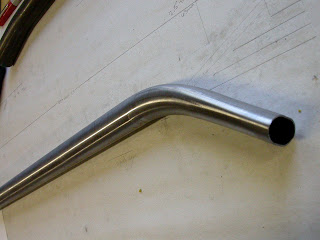 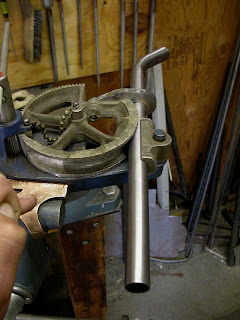 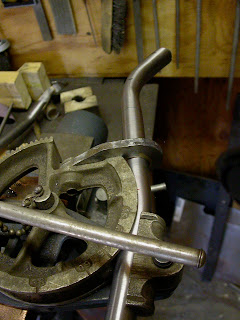 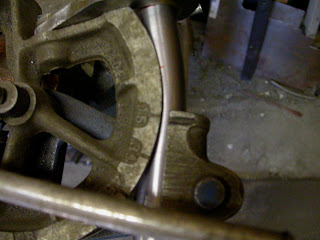 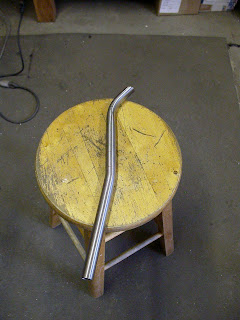 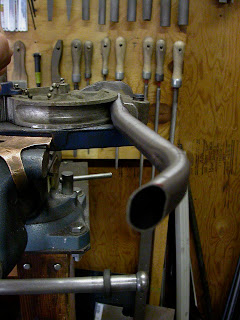 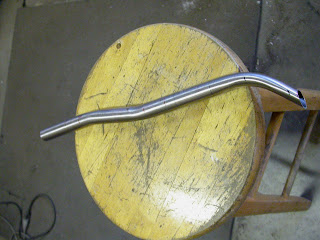 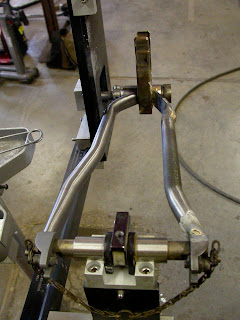 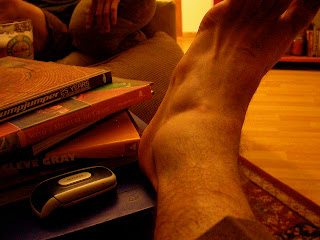 All told this will be a slow build because I did the above trying to ride a steep downhill trail on my steep angle single speed.  I can't put too much weight on it for too long and it keeps wanting to bruise and swell up if I do.  :-{(