I'm always a big fan of when I bike takes on a personality before it is realized.  This one is already going on three or four personalities which are really just overlaps of one another but no one (be it human or beast) can have too many nicknames.  Hedge's build request for this bike was The BIG Lizard in my Backyard.  I asked if he meant the Giant Iguana.  Definitely.  If the Giant Iguana were actually a bike instead of a crappy relic of 90s chinese manufacturing that I spent way too much of my teenage bike years dealing with, just imagine how it would ride.....It would totally slay!  This one's got big wheels, tons of travel, a short-ish rear end, and slack angles that still let you know where your wheels are.  Its a romper from its inception, and its life will be spent getting totally thrashed while serving as a home to its hobo, Hedge.  The "Floop Tail" is a first but any lizard needs a namesake tail.  We still haven't found any of those old Giant Iguana decals yet though, so the current thought is to make it an '89 Oakland A's team bike.  Georgians beware of the arrival of the 1989 World Series Champion Oakland A's at your this fall.  Carney and The Eck are out to put the hurt on. 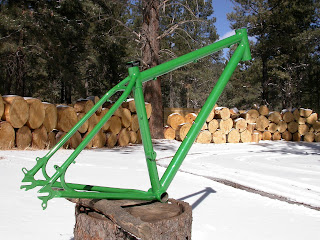 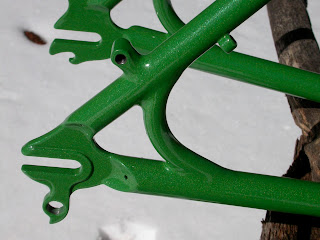 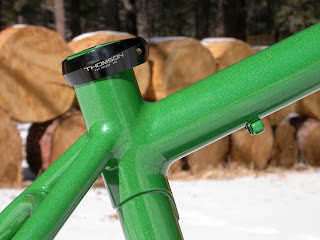 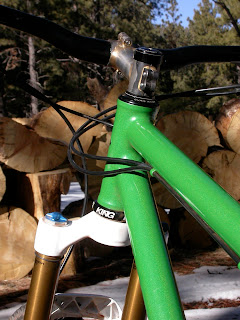 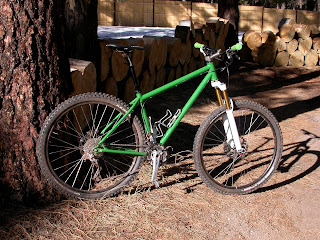 Posted by Richardo at 11:01 No comments: 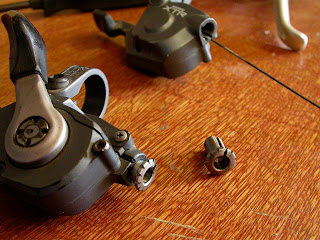 I found these old XTR shifters at a buddies garage sale before he split town.  I don't even think he charged me for them but I also didn't realize that they didn't have barrel adjusters so getting them to work would be a process.  There was a brief tick in time where M950 XTR shifters and M739 XT shifters used a barrel adjuster with an oversized 8mm bolt.  M8-0.75 threading to be exact.  With no luck tracking down the real items produced for these shifters I was forced to try and dig up some bolts of that size to make some barrels.  I combed the internets for a while after a trip to my only descent hardware store turned up nothing.  The only thing that came up for that size was a replacement part for a hitachi with no pick and finally....chainring bolts.  I fashioned these replacement barrels out of the latter and spent....0.00...save for some food calories and some electricity for the drill and air compressor.
Posted by Richardo at 09:33 No comments:

This story goes back a ways....high school really.  That's when I started riding with The Boy.  We rode GTs.  One of the first bikes I ever parted up was for the boy.  We had these Prestige GT Richter 8.0 frames in the ceiling of the shop I worked in high school.  We sold them for something like $125.  Nice bikes considering they were the warranty reserve from 1993.  I think I built The Boy one in 1997 or so.  He still has it; still rides it.  Its served a lot of duty over time...broken most of the parts it held at least twice over...probably on its fourth set of wheels.  I rode that thing on my last trip to homeland.  It has reached scary status.  Needless to say I've been riding bikes with/building bikes for The Boy since I was 15.  More than half my life.  Crazy. 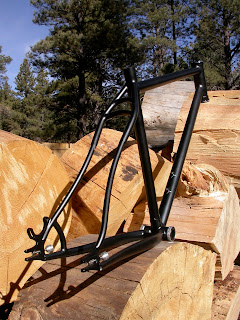 Sometime in our college days we decided that we needed to make an official bike gang of our high school bike posse.  The bike ninjas were formed sometime around 2001 and a free yahoo geocities webspace was comendered by The Boy to document our covert operations and mock our friends that couldn't quite find the time to make ninja status.  Operation Bow Tie was of particular popularity to our readership as myself and agent Ron served in kidnapping The Boy's now wife and driving her around blindfolded before dropping her off unknowingly at the local trail head so she could then be chauffeured around town by her friends to end up at the top of Stone Mountain where The Boy would propose to her.  The bike ninjas shared a brief fame in LBS lore around north Georgia but in reality we still scheme ninja operations to this day.  In that I've already said too much. 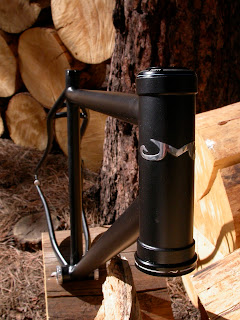 I got the call last fall that The Boy's primary bike (The GT serving secondary and loaner duty) was down and it was time for a new one.  We had both long awaited this day.  Conversations I have with clients tend to take place in the qualitative realm rather than trying to discuss numbers.  Our conversations were the epitome of qualitative; we briefly discussed wheel sizes, but The Boy wasn't interested in anything that would result in sluggish riding.  After describing to him what 29" wheels would do for him on a bike that was properly executed he said, "That describes nothing of where or how I ride."  In the piedmont of North Georgia you are never doing any one bike riding function for more than say...2 seconds.  Half a pedal stroke; left; up; down; left; right; left; pedal; down; dodge vine; pedaleft; accelerate; climb; left; right.  The trails follow second growth forest that has taken over once terraced farmland and are covered with needles and leaf piles hiding the mystery terra below.  A granite layer can be exposed as southern slickrock anywhere within a hundred mile radius of its pimpled out epicenter of Stone Mountain.  Riding here is FUN, and bikes that do it well are playful and quick...i.e. you can steer by throwing a knee in a split second.  The Boy knew he wanted a 26".  These bikes live on in a larger group than the mainstream wants to recognize. 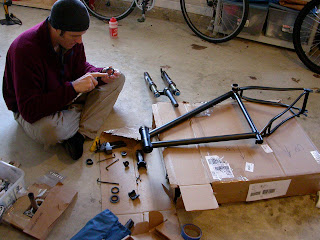 This bike would be a dedicated singlespeed realizing the potential of the old world wheel size with the modern amenities of a thru axle tapered steerer fork, Industry Nine three degree hubs, disc brakes and an external bottom bracket.  This is the pinnacle of hardtail design in my opinion.  There's nothing new here at all save for an oversize head tube.  Everything in the bare bones geometry of this bike was realized a decade ago.  While new bikes and big wheels are cool too they really tend to complicate many designs more than is necessary and compromise a lot of basic and essential riding functions for riders too small to fit them.  Don't get me wrong, I love all bikes and all the current size options, but don't go confusion essence and utility for the latest fad. 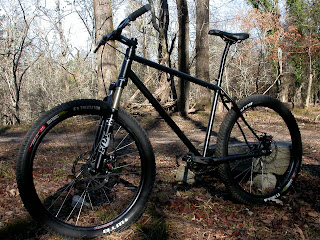 The Boy picked me up at the Brick Store Pub, a favorite Ninjas rendezvous point.  We made our way to the eastern headquarters where the heavily consolidated package I had mailed out from the ranch awaited.  The speeder was assembled with minimal hassle and we pedaled out to the local proving grounds.  Most riders would consider this place a write off and it shows.  The trails are covered with needles indicating lack of use.  Its pretty damn confusing if you don't have the time to devote on the regular basis to figure this place out.  The Boy has this devotion and it shows.  We looped around single tracks for two plus hours and never repeated ourselves.  Pretty good considering the closest national forest is over an hour drive. 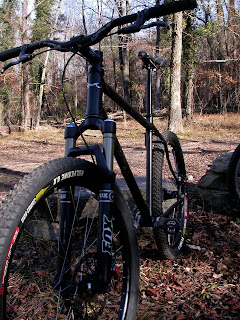 We climbed through the southern slickrock entrance and wove through the tightly spaced trees and vines while I tried to keep up on that scary old GT I had built originally and rebuilt probably four times over the last 15 or 16 years. 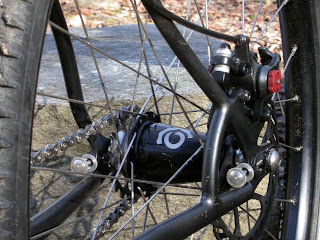 At the first turn down The Boy was gone.  Granted you should always have some home trail advantage; I was flat out dropped on the scary bike.  Outta Sight.  I came to the end of the downhill to find the speeder's drive side presented to me and the trail I descended, The Boy standing on its opposite side with a monsterous evil grin on his face.  A handshake awaited my arrival follwed by the words, "That was it.  That was the test." 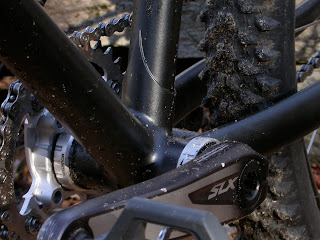 "I didn't fully believe what we were talking about, what you were asking for, and promising in return," The Boy told me with the skepticism of a scientist, "but this is so much more than I ever thought possible."  I was floored.  The ceremonial drinking horn was procured and we both drank to the ride. 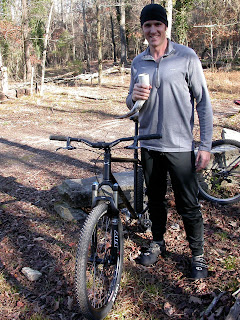 Posted by Richardo at 13:38 No comments: