For teachers and students alike, spring break is a much needed opportunity to relax, take a vacation, and forget about school for a week.  Most, also, do not much look forward to returning, but rather accept the reality that school must go on until summer.  Imagine your life as a student dreadfully awaiting your first Monday back from spring break, and upon returning to school you find the yard excavated and where grass once grew now lies the berms and rollers of a new mountain bike park and dirt track.  For Brian Eller, a cyclist and P.E. teacher at Elvira Elementary School located on the south side of Tucson, AZ, spring break would be spent in the school yard seeing out this vision that saw its beginnings four years ago.

The vision was a collective effort shared primarily between Brian and Ignacio Riviera de Rosales was to expand the mountain bike community and provide incentive for kids to ride bikes to school.  Ignacio works for the Pima County Department of Transportation teaching bicycle safety courses in local schools, as a part of a program known as "Safe Routes to Schools."  The two met at BICAS, Tucson's community bicycle co-op, four years ago and the ideas started flowing.  Originally their conversations focused on expansion of Ignacio's safety course, but these discussions quickly shifted to much more broadly focus on expanding the mountain bike community and providing incentive for elementary students to ride bikes to school, and soon the idea of a permanent bicycle course was born.  Tucson, despite being at the forefront of the political unrest that spans Arizona, is listed amongst the top ten most bicycle friendly cities in the nation.  Funding for the idea came through Ignacio and the DOT, and approval for the ground work was stamped by Elvira principal Tom Hubbard.  The project was officially a go.

The original plan was to make a singletrack XC course around the school yard, but word of this project spread through BICAS and the duo soon found in thier hands one Rocky Serna, professional track designer and mastermind behind Tucson's Barrio Trails.  Rocky took Brian and Ignacio's idea, applied the motto of "let's make this fun,"and etched out a ground vision of the finished product.  His vision would include the berm turns, flowy rollers, and step-ups that would send the three of them plus myself racking our brains and scurrying all over Tucson the week of spring break to make sure we had a finished product by the following monday and not just a wrecked schoolyard. 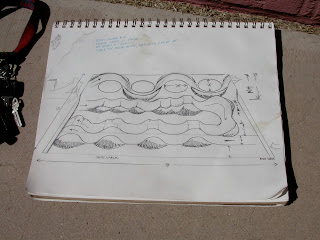 When I showed up on Monday all that had been decided was that Wednesday was volunteer day and that there were nine identified sections of track to build...the dirt track being only one of them.  Yup.  A group of volunteers from United Way and the Fred G. Acosta Job Corps center were scheduled to come on Wednesday. "So this whole thing's gonna go in in a day?!?," I thought.  As Rocky sprayed and marked the field that day I took a familiar stance behind the head of a Pulaski and started digging up grass.  Brian and Ignacio joined in and in three hours time we had carved up a fifty yard stripe in the schoolyard.  "We are going to need mechanical assistance to go along with Rocky's seventeen tons of dirt."  We called it a day and headed for burritos. 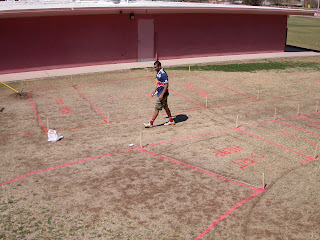 Tuesday was spent making dead end phone calls and hanging out in front of the power company awaiting the donation of an old power pole that was to serve as a log ride.  We managed to more or less get the log ride prepped for install, however it had to be covered in fire hose so that splinters covered in creosote wouldn't be a safety concern.  With a heavy splintery telephone pole, this proved to be a bigger issue than it may sound.  A ten ton dump of gravelly fill dirt arrived and was met by our disappointed faces...disappointed at both the slight amount and the low grade for which was paid.  We looked at the mess and realized once again, "we're going to need mechanical assistance."  Brian and I spent the rest of the day tracking it down.

It came in the form of a Bobcat from the local rental facility at 6:30 the next morning, two hours before the volunteer work force showed up about thirty strong.  It did not come with a trained operator, however, so we wound up taking turns trying to make the smallest Bobcat known to man dig up dead grass in the desert.  A work force of thirty, eleven wheelbarrows, countless picks and shovels, and a micro Bobcat made short work of ten tons of dirt and as the crew was leaving that afternoon another dump of dirt arrived to their dismay.  I left that afternoon and returned to the northland.  Prior obligations would force my spring break to be continued back home.  Brian and Ignacio would have to see their own project through in the days that followed, but luckily their volunteer group would be returning on Thursday.  As we left that afternoon with picks and shovels in hand, Brian caught two of his students skating on school grounds.  After telling them they couldn't do that while he was there they asked what he was doing.  "Building you guys the awesomest thing I can think of," Brian replied.  "Go check it out."  "Whoa, can we ride our skateboards on it?," they asked.  I laughed and walked off leaving the schoolyard thoroughly churned up and the track only etched in. 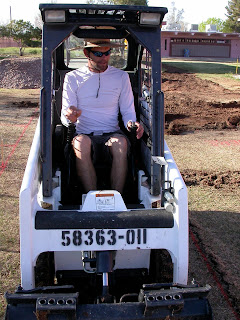 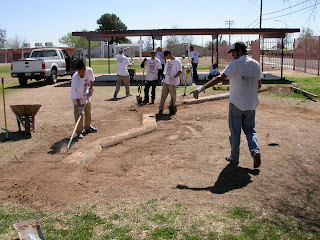 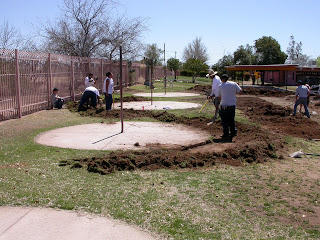 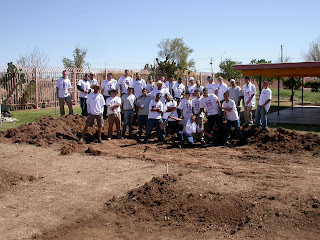 3:00 Thursday afternoon I got a call from Brian.  "Its done, dude, the whole thing....couldn't have done it without you, man."  They cranked it out...the whole rest of the track....Brian and Ignacio and the volunteers and the picks and shovels and wheelbarrows and a track that traced easily a half mile loop around the school, berm turns the whole way.  Done.  And giving the students and faculty of Elvira Elementary the first mountain bike track on public school property in the nation.  Ride on Tucson.