February's almost done and winter in the shop has been an interesting experiment to say the least.  Four forks and two frames in the last two months all done with hand files with some other magic thrown in for good measure.  Here's my new ride.  The super commuter.  Its everything a surly cross check ever wanted to be.  Actual tire clearance for 700 x 45s, horizontal dropouts, rack mounts.  John the powdercoater called this the blue job.  He baked some color into the steel before clear coating it.  Its pretty cool...it reacted with hand oils so you can see some fingerprints under the surface and all the brazes are real clean and shiny.  Of course photos do it no justice.  I'll get some complete bike pics when its all done. 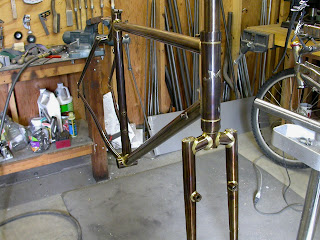 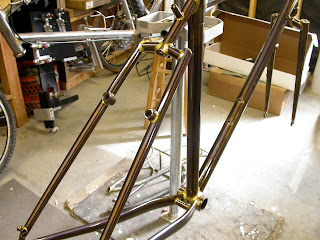 Moustache March will be here in no time at all...be ready.  Richard

I got out of town this weekend and headed down to Tucson for the SSUSA thing.  Last year it was called the Single Swizzle and maybe too this year.  Obviously I had and apparently still lack a great deal of knowledge about the particulars the event.  To me it was just a road trip to Tucson and a ride that sounded cool.  We piled seven deep into Evan's biodiesel powered '88 chevy one ton six pack.  We rolled in and setup camp somewhere on the course and drank around the fire till three in the morning and woke promptly at dawn.  Breakfast and breakdown of camp was slow and gradual and interrupted by the arrival of the aid station and spectators, and the promoter himself.  We were not racing in the Swizzle and that was never the intention.  The race proper was something like 55 miles of desert riding with some heinous hike a bike climbing.  Our plan was to do the ride that maximized fun.  25 miles of singletrack followed by party at the end.  We dined on breakfast burritos as the race rolled through and had packed up our camp as the race started coming through the second time.  The truck found a willing driver to the party and a group of seven departed on our fun ride of the race course.  We were fresh and fed and in no hurry what-so-ever.  The racers we found ourselves intermixed with were not so jolly.  Whining and bitching as they passed "where's the downhill?"  blah blah blah.  Pretty funny stuff.  The route consisted of a long and breathtaking stretch of the AZ trail connecting back to the outskirts of Tucson.   What we rode was nice and rolling desert terrain without punctuated elevation gains and was completely rideable.  A fabulous ride in the desert sun that made me wonder why I spend my winters here in the cold.  When we made it to the descent I couldn't help but laugh.  The trail was treacherous...at least by any race course standards.  Narrow steep descent with lines that kept you testing your skills on the peak of your nerves.  Slip up and you'll surely encounter plenty of sharp rocks and sharper desert plants on your tumble.  Most of the people in the race were walking their bikes down the hill.   We passed politely and continued the ride until interrupted by the friendly gang with sombreros and mariachi music at the Tequila Tree.  We stayed for a while and they handed us maracas to strap to our bikes for the cruise out.  Still steep and rocky.  We stopped for a flat and watched the race go by...most of them already had, but you could really pick out the local riders on the downhill.  I imagine looking at rocks and cactus is really intimidating if you come from the snow or the swamp or other parts of the country.  It was impressive.  The rest of the ride was met with creek crossings, yes creek crossings...the winter rains and snows have filled the washes to a flowing status even down in the desert.  Awesome.  The whole thing really...the party at the end was met with pizzas, the Oscar Blues tour bus, footdown, tug-of-war, bonfire, and yardspace to camp in when it was time to pass out.  A small race crowd capped at 100 racers and a good party with people coming from all regions of the country.  Impressive.  We decided to forgo the ride on Sunday after waking up soggy from sleeping out in the rain.  A good decision considering it ended up taking us all day to make it back...tire issues, traffic, detours, rollerblades, snow up high, pushing the truck on the ice, all day packed seven deep in the vegable six pack.  I'd be willing to bet its more efficient than a prius.

Jessica's tourathlon bike is done...finally.  I feel like it took a long time.  Jessica is a girl I work with at the other job who races triathlons and has been known to ride her bike to far away places like San Diego on a whim.  She's been doing this on an aluminum lugged carbon tubed Trek from the ninetys that's been baking in the Arizona sun since she's owned it and is about 4 cm too small for her.  People cringed when she strapped a rack on the back of it and took off, but she made it and got back and raced a half ironman.  I finally convinced her to let me build her a Moustache Ride and here's the result so far.  73/73.5 HT/ST with clearance for 700x35c tires, LX cantis, Ultegra 9 speed hubs and drive train, compact double, 12-27.  I tried to keep it sleek and streamlined while being able to take racks front and rear...the bosses are tucked away pretty well.  Right now its all mocked up to fit for a custom stem then it'll go get colored in.  Check it out. 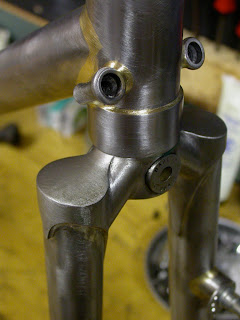 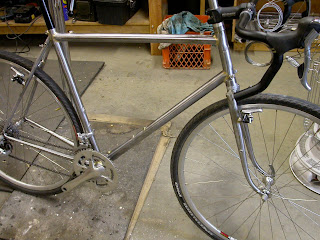 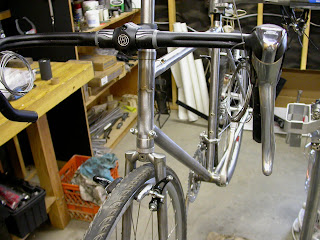 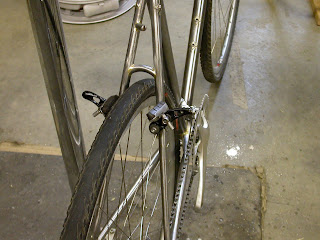 This week onto a new bike for me...I didn't get one last year and I'm really sad about that and I haven't made myself anything on the jig yet so I think its time.  It'll be the super commuter.  It'll have some similarities to the one above but take 700x45c tires with adequate mud clearance, bottle opener dropouts, downtube shifters, a fillet brazed fork/matching monostay combination that all said should be pretty sweet.  Type at you later.

Posted by Richardo at 19:09 No comments:

Do You Remember Rock and Roll Radio?

I found myself in the midst of a flashback of sorts tonight.  Snelson and I were talking about Outkast and the Love Below/Speakerboxx album and I suddenly felt the urge to play some Outkast on the bass guitar.  Only tonight when I grabbed the bass I didn't take it over to the couch and assume the sloucher posture, tonight I played standing like night of the first time I played Outkast on the bass guitar, Hey Ya! off the love below.  Then I broke into the Happy Family story as I stood amongst friends and played occasionally, telling of Boo Ray and the day it snowed in 2004 in Athens and the party that a few brave soles came to witness.  I wondered if by some coincidence it was this day all those years ago.  Its not, though the timing seemed about right.  Inspired six years now.  Maybe its time to play music again. 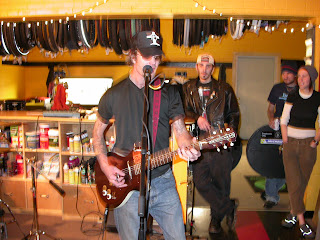 I've been working on the triathlon touring bike...the tourathlon bike as it was dubbed tonight.  I should finish tomorrow.  Its pretty bad ass if I must say.  I'd certainly ride it.  It turns out that a cross between these two essentially ends you up with a road bike with one underlying theme....it goes in a very long straight line.  I'll post some complete photos when its done and tell y'all more about it then, but for now you can look at some raw brazing shots. 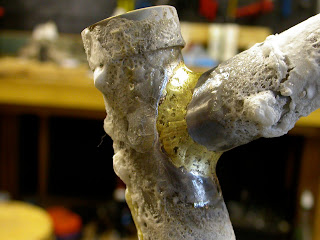 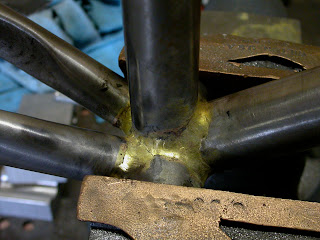 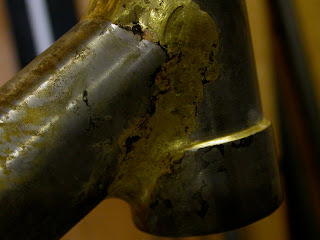