So the expense of tooling up with machinery never ceases.  At this point the wish list for machine tooling out spends the vehicular wish list ten fold at least.  Not that I'm shopping for used Jaguars or anything.  Just a new bike or two and a....well never mind.  The last bit of The Trade with Joe mentioned a few posts ago was this rotary table.  Its a six inch Phase 2 horizontal/vertical import table, but it came with the Sendero Cycles main tube mitering block to be setup vertically on the Bridgeport.  Given that I already have a mitering system in place I decided to remove the attachments and start with the table ground zero as a horizontal unit.  I hope to use this table to produce some bending dies to further facilitate some frame building methods already in practice at Moustache Cycles. 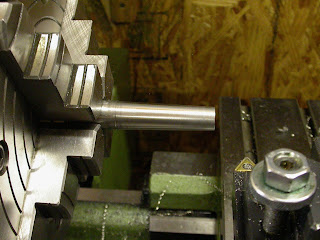 As with any piece of machinery, you have to somewhere, and when an opportunity to put this little table into rotation came about it seemed time to remove the dust.  A six inch table is a bit small for my ideas, but the spatial concepts are the same so I thought I'd better start learning with what I have and build from there.  I little internet research suggested to build the table out to job so with some scrap metal in hand I took to this.  First project:  34.9mm seat collar with integrated upper rack boss.  Apparently QBP is out of stock of the Salsa units for some time to come, and a current project requires a piece such as this.

Step 1:  Centering the table with the spindle of the mill.  For this I turned a #2 morse taper out of a piece of 3/4" Stainless.  This is a much harder piece to make than it looks.  I used the 4 jaw chuck to keep the  work piece as true to itself as I can.  This is aligned with a dial indicator not shown.  The taper comes to .050" for every inch along the x, but in degrees the precise measurement is finer than I can measure or calibrate on my 1986 import lathe.  A real machinist would precision grind this piece, but neither having this equipment nor the knowledge of the process I went with the lathe, turning it down as close as I could, and checking it along the way with a MT2 drill bit adapter I have.  The slop in the piece was discouraging, but I found that once I was close with turning the taper, and as long as I had a length of the original diameter to work with, I could reduce high spots with a file/emery and hone in on my "precision fit." 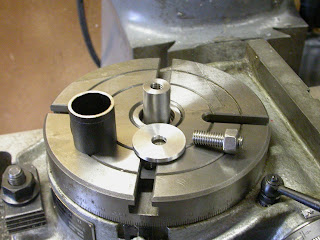 With the taper pin fit and tapped into place I needed a way to remove it so it got drilled and tapped for an extractor bolt (think square taper cranks).  The taper pin will catch a 3/4" collet from the mill quill, and if I really cared from there I could use an indicator to get a more exact center.  For this I figured the pin to collet closure would do, but I checked it several times by chucking the pin and finding the point where the taper "stuck".  Table centered.  Now its time to build in some work holding. 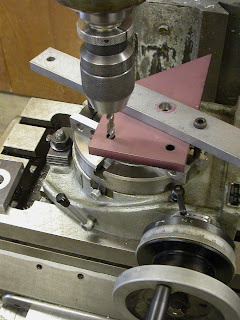 One of the more useful pieces of reading I did before attempting this read something to the effect of "with your table centered, you can use it to build itself out."  That said in my mind this was the most complicated step.  I had roughed out the work piece into a rectangle with the holes drilled and the shoulder bored through the center, but mounting even a small piece such as a seat collar was going to test the space confines of this table.  The work piece would need to be centered to the table through its bore so I turned a nicely toleranced adapter sleeve to slip the centering pin.  No clamping pressure here though as the pin is not secured from the underside of the table.  The clamps would need to attach the work piece squarely to the table, keep the graduations of the table in phase with the desired cuts, and allow the mill cutters to extend beyond the work piece to make a full cut.  The table has 3/8" tee slots for use with 5/16" hardware, a size that was seriously lacking in my collection....(add hardware store to the wish list).  I decided to make some 8mm tee-nuts out of some aluminum scrap...aluminum nuts, I know.  I found a semi suitable mounting plate in the scrap collection and nicely the color helps show the work a little better.  I clamped it to the table on some parallels and drilled a bolt circle with countersunk holes to not interfere with later work holding.  We'll call this the clamping plate.  I left that cool fin in tact to scare swimmers, only to find out that it prevents full 360 degree rotation.  The plate was re-centered on the table, this time with its own hardware, but still on parallels.  I should note that it has a low tolerance 3/4" hole drilled through its center, allowing my taper pin to pass through. 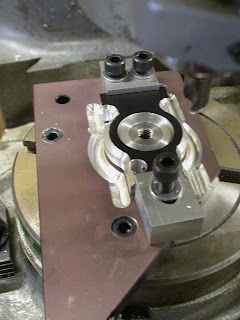 At this point my roughed out work piece is centered on the clamping plate, but not attached.  A couple small adjustable clamps were devised and corresponding bolt holes drilled on the clamping plate.  Now the clamping plate is squared and bolted directly to the table surface and the work piece is squared and bolted to the clamping plate.  Six cuts later and I'm nearly finished.  The angle cuts were made with a single flute countersink bit, but results with this were less than pretty.  An angled end mill would be more desirable, but I have none.  I could have angled the mill head, but I've found that one of the absolute worst tasks in the machine arena is squaring the mill head of the Bridgeport.  So at all possible effort now that its square I try to leave it that way.  I'll take an ugly cut on a sample work piece by a long shot.  It cleaned up decently enough with files and abrasives. 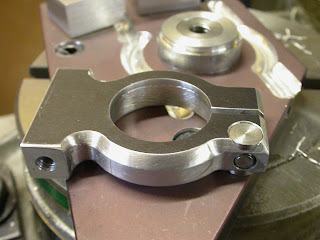 So there you go.  I think this whole walk can be summed up by saying that there's lots of steps and even more brain power, meaning a huge time sink and learning curve.  But with all that its pretty fun.  I'll be looking to complete a few more tooling projects with this table setup as is before switching it to vertical and attempting those dies I mentioned above.