Frosty Winters are the Flagstaff way, not always accompanied by snow but sometimes, and between winter storms are periods of nagging cold and freeze thaw glaciation that render most outside activity next to impossible save for morning ice running.  It reminds me of the opening scenes of The Empire Strikes Back when the Rebel Alliance has fled to the Hoth system.  Even our savior to the south, Sedona, has been plagued with red mud and for the most part un-rideable.  Like winters of old so I'm told.  Maybe I should look into acquiring a tan-tan.  And so it hit me the other night while staring off at the stickers on my guitar case waiting for show-time at the Monte Vista Lounge.  10 years.  10 years in Flagstaff.  10 years of Frosty Winters being bailed out by world-class mountain biking one town over. 10 years ago to the night Friday night I rolled into a town on a Frosty Winter night to make a new home and start a new job at the Arizona Conservation Corps.  When I first arrived I grabbed a forest map and a burrito before heading to the first beer joint I could find and catching a local act, Gravy, before nestling down in the back of the Space Cruiser on an open forest road that shown no signs of winter, no place to go but the forest.  I was a true HOBO in every regard.  The burrito was sub-par, the beer down-right terrible, and the music left plenty to be desired...not my thing to say the least.  A few days later work had begun and I had resolved that I could probably spend the year in Flagstaff before moving on to the next great spot.  Well ten years later....

I can imagine no better way of spending the ten year anniversary of my residence in Flagstaff than playing a show at the Monte V.  Many Friday nights of my earlier years were spent wrecking my eardrums at the V.  To be on the stage this night was remarkable.  The crowd: amazing.  A lot has changed in this fair town in the last ten years.  The beer is good these days, at least some of it is, the music scene rivals any other small western town, and the mexican food is, well, incredible.  If I knew ten years ago that we would be riding the bikes we now ride the ways we now ride them, I'd have been in awe.  I distinctly remember resenting half of the trails I now LOVE.  Living here has brought me to a new understanding of bikes and what they can and should do, so I say to the people of my adopted home:  THANK YOU!  Thanks, for having me, teaching me, and showing me your ways, for embracing the eccentrics and keeping us all in such good company.

Frosty Winters (the bike) is as much of an contradiction as winter in Arizona.  Its owner, whose namesake the bike takes, is not frosty at all, quite friendly really, and the bike will no doubt see more long summer days than anything else.  This frame features the latest blend of machined metal turned into performance ride traits aimed at taking its pilot closer to the edge more comfortably than ever before.  Its dressed up in a two coat powder job of Chameleon Teal over Ink Black marvelously executed by Mountain Shine Coatings.  Really the photos do the paint no justice at all, as it shifts shade quite a bit in varying light.  Reminds me of my old Klein Q-pro...better perhaps.  The paint looks straight black, but the sparkles shift from green to blue to purple and given the right low angle light, the bike just radiates violet. 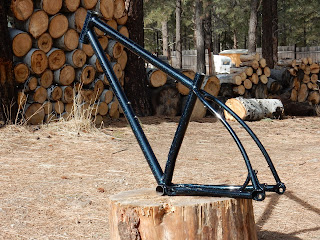 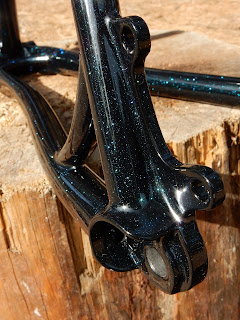 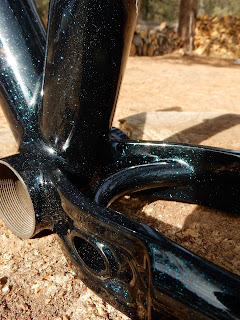 Some details of the in-house yoke that make this bike possible.  I'd say its the favorite method I've used to date.  It uses thicker plate than before but the relief keeps the weight identical and the hollow brace reduces weight further while stiffening the whole assembly. 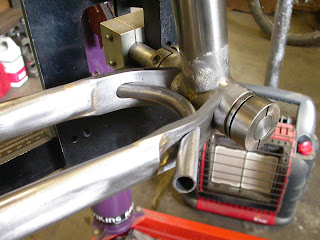 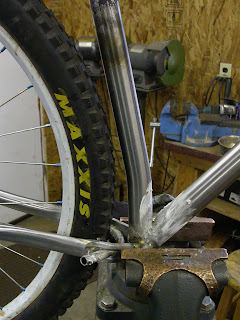 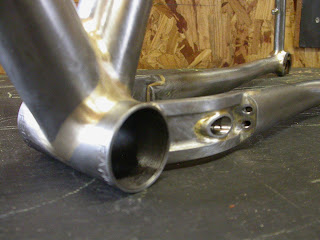 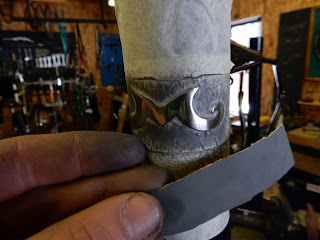 Legend has it that within the first fifteen minutes of riding, this bike had already saved its owner when a low light A-line was unexpectedly piled with debris in the ongoing user group land battle leaving the only one option:  PULL UP.  The impending crash was thwarted.  Its tales like this and plenty of others that make me psyched to keep this effort going!  Moustache RIDES!  Thanks for the project Frosty.  Enjoy the ride!

I've been mulling this one over for a while now.  Several years.  I've made various efforts towards compound bends with chainstays over the past couple years, mostly rotating by eye or with an angle finder and producing a fair bit of scrap metal in the effort.  Handlebars really put your bending skills to the test.  And the came to step up and pass the test.  Commercial handlebar offerings don't meet the needs of the next two works in progress, and the one guy that makes such an appropriate product I guess isn't much for email.  So my hand was forced,  Lemmy died, and I'm throwing All the Aces.  I'm taking cruiser bars and riser bars on at the custom level.  Custom rise, custom sweep, custom width, custom comfort, 7/8" clamp cause its the BMX standard, unchanged. 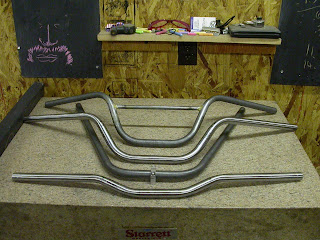 Of course tooling updates were in order.  But I wanted to try things out a bit first before fully committing to a new bender.  I have a design fairly worked out in my head, but that's still a far cry from having a working unit in hand, so I figured the prudent thing to do here for time sake was update the ol' Handy 7/8" bender once again.  The ol' Handy has been $100 well spent.  It came from ebay in 2010 and since this picutre has been through several updates to improve its performance.  Its design flaws show a bit in thin wall tubing, but it has facilitated nearly all my learning of bending mechanics.  It is shown below with the first clamp mod.  For this project the clamp was scrapped in favor of a new one...imagine! 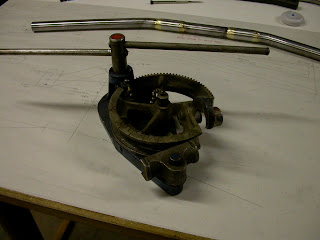 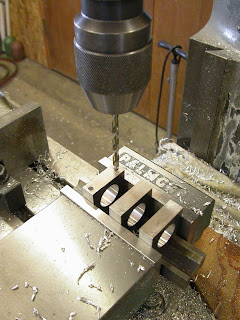 With the new parts in hand several bars were drawn out, raw lengths calculated, and the bends made sequentially.  As for the rest of the details, well, I've got to leave you something to think about.  I will say that by far the hardest problem that I'm still trying to wrap my head around is the vector math involved in creating a three dimensional part.  I got stumped several times on paper before taking the try and see approach to prototyping.  I'll continue to pursue the magic formula, but for now the bars are straight (left and right grip area are parallel on the surface plate, and the clamp surface is flat when the ends are touching), and the bends are even and symmetrical.  This hand felt like a big win, but the game rolls on.

Posted by Richardo at 09:57 No comments: