Our Local Internet TV Station came out to do a piece about the bike I was building for their host, Dapper Dre.  The video debuted this week for Bike to Work Week.  Click the link at the top to view full size and check out the other propaganda at 4flagTV.com

Posted by Richardo at 13:08 No comments: 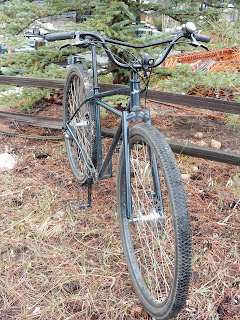 Well, despite its size, this bike slipped out the door last month without me getting any pictures of it.  So when I got the invite over to the Professor's house last weekend to take some pictures of his historical artifacts including his new bike I jumped on over.   Here you have it better late than never: the largest Moustache to date....36" wheels, 27" of top tube, 30+" cruiser bars and nearly a 900mm saddle height.

A bike this size is best viewed through a comparative lens, so for full effect click on the images for the slide show. 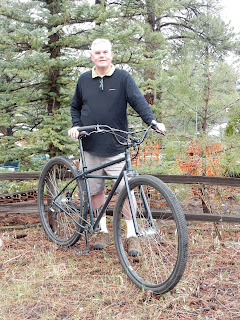 Tall man stands next to a large bicycle... 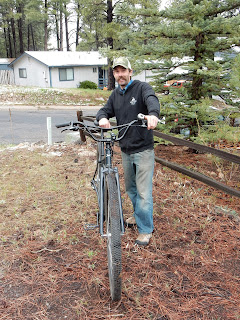 Man of above average height stands next to large bicycle. 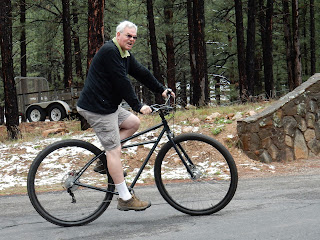 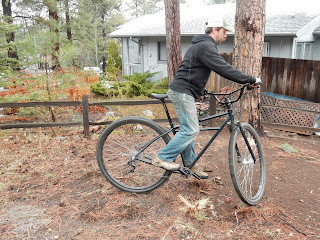 Man of above average height attempts to ride large bicycle. 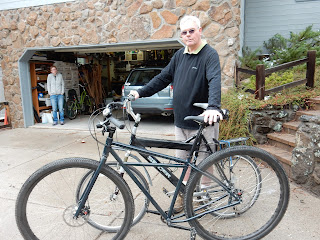 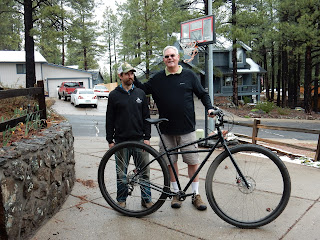 Ride impressions?:  Well I think now just about everybody on the NAU campus has seen or been run down by this guy and his new... thing... with a crooked smile on his face as he drives the crowd.  A lucky few in the friends circle have been fortunate enough to ride it.  Smiles all around of course, but from my few moments before it left the barn:  this thing is a train in more ways than one...(good thing the Professor likes trains); it steers like its on rails and momentum is key.  All laws of physics apply:  ....an object in motion....F=ma....for every action there is an equal and opposite reaction.  The gyroscopic effect of those wheels is noticeable, at least to a guy of above average height and below average mass (figures based on US National averages for height and weight).  The whole platform is one of much intrigue, and now with one down I welcome the next one.  For those over 6'6" or so this is a real and viable option for a custom bike.  The whole package came together quite nicely for the Professor at 6'9".  I would be curious to spend a bit of time on one my size as well (hey we can all dream can't we?).

Mike, your spirited involvement in this project made it truly a pleasure.  Please enjoy this bicycle for a long time to come.  Thank you for the project!

The Professor was kind enough to invite me in to see (and hear) some relics of his archive over a hundred years old.  As a moonlighting musician that's been working on an album with a full band, and as a bike builder and aspiring machiner, it was interesting to hear how this was done in the first era of recording, as well as watch the result. 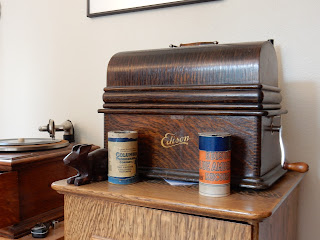 The Edison Home Phonograph of design by inventor Thomas A Edison (yes, that Edison).  Patents on the picture below date between 1896 and 1906; this machine is of the later creation.  I'll do my best effort to set the stage and repeat what was described to me, but my brain has never been one for retaining dates, let alone factoids.  Electricity has been harnessed and Edison has already invented the network through which it is being distributed (1870s).  Most of this distribution though is to commercial interests in major cities and it seems most homes did not have electricity until the 1920s if not later.  Radio has been "discovered" but yet to be "invented" (Guglielmo Marconi is given popular credit for this in 1902 after more than 80 years of discovery and advancement in the filed, and the first radio broadcasts of human voice did not occur until 1916).  So the phonograph is a machine for mechanically reproducing sound, and without a doubt an item of luxury at this time. 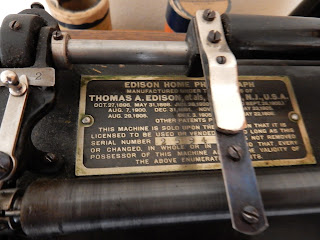 Without electricity this machine uses a spring loaded wind up with weighted controllers to produce a spin of a certain RPM. .  I would have to think that the devices regulating the final RPM of the player spindle would represent advanced machining of the day.  The drive mechanisms sit in the box below the feed and amplifier.  The record is tracked with the slide at the rear of the machine.  The two arms extending off the slide serve as the tracking feed for the record and the play back.  This machine tracks off a metal fine pitch screw (above in the immediate foreground) rather than directly off the record.  Playback is direct amplification of the needle through a horn of varying size.  Below the small cone is sitting behind the player itself, and a large cone is attached to the player in the picture. 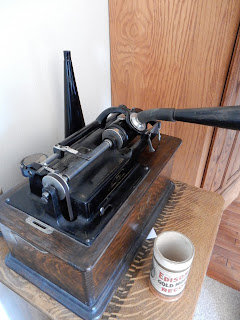 Records for this machine were cylindrical and each play will degrade the sound quality.  A record contains a single track.  Below the Professor shows off his extensive collection.  These days a track could rival i-tunes in best price or make the record companies jealous at their margins alike.  Tracks for your 1900s era Edison player could range between $0.30 and $300.00. 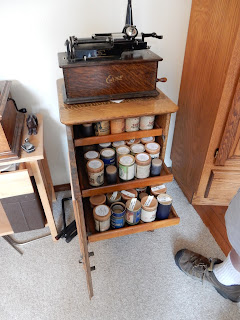 The recording process of the time would have been quite interesting.  An artist would have to go into the Orange, N.J. studio to record the track in a single take.  The process was mechanical and the sound of the room would be carved into a wax mold by whatever device.  No separation of instruments, no over-dubs.  Now you have essentially a lost-wax casting process in play.  The wax mold is turned to a steel transfer for production of the final product. 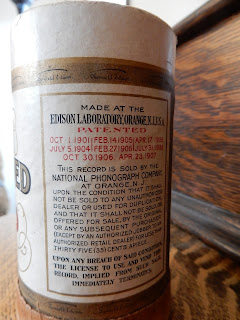 Content of the songs tend represent interests of the time, so there is a lot of western themes with cowboys and Indians.  There is also, interestingly, or maybe not, a lot of subtle and not-so subtle over-tones of white privilege.  The track below is by Billy Murry with the music by the Edison House Quartet.  You can listen through the UCSB cylinder archive, and there is much more detailed information here as well.  I was unable to play the track directly but the download worked.  Ida-Ho! 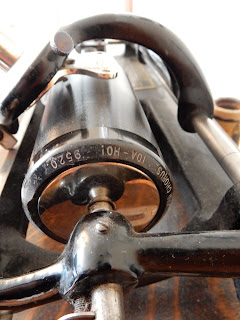 With direct amplification, sound quality becomes more noticeable with speaker size.  This large cone is not something you want to be drug out of your costume closet.  When in use it would be hung from a single point at a balance as the small end of the taper needs to be able to move freely with the player needle. 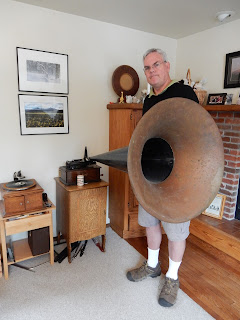 The Professor's personal digitization efforts.  This part I like particularly well.  Blending the old and the new through a simple functional device.  Direct amplification of digital sound.  Thanks for the tour of the archive, el Professor! 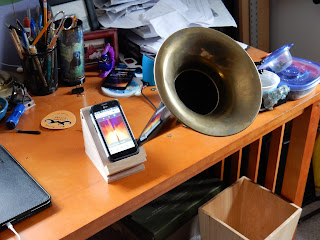 Posted by Richardo at 10:25 No comments: