...as in Vishnu Schist.  The bottom rock layer in the Grand Canyon.  1.6 billion years old.  The reason the canyon is known as "Grand."  When you get to the schist of the inner gorge its like you've entered the oldest, shiniest, most decorated room in the earth.  It glimmers in shines a sparkled red dark brown.  Kyle is a geology teacher and local gold prospector and at some point in the build process he said he said his bike would be known as Vishnu as in the bottom layer and I suggested we make it look like the rock.  He settled on RAL3007 Black Red with a gold flake top coat done by the fine hands of John at Ironhorse Coatings.  This bike is a short wheelbase 29er built around a tapered steerer Rock Shox Revelation with switchable travel between 110mm and 140mm.  He wanted a stable downhill platform that still could climb and maintain quick handling.  I think the travel switch option will be very nice on the climbs and for low key riding, as the fork feels very plush and responsive.   It'll clear 2.4 inch tires tucked all the way into 418mm chainstays and it will take a full complement of gears or can be run as a singlespeed. 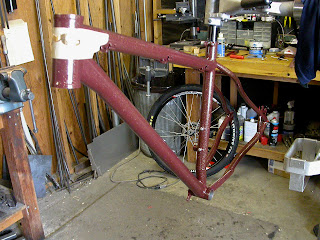 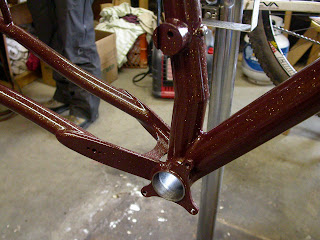 Some firsts for me on this bike:  This is the first 29er I've done that doesn't have the curved seatstays.  The first time I've put ISCG tabs on a bike.  The first Reynolds tubing I've used.  It has a 33.1 mm seat tube that takes a 30.9mm seat post--a common dropper post size--in their 631 alloy that I hacked and gas welded back together as a butt joint to get a little more tire clearance.  We'll see how that holds up.  Really I'd like to curve this tube out but thought better than to try and bend this seat tube.  This reynolds stuff is mucho $$$$.  This is also the first full yoke style chainstay attachment I've done.  I used the plate on the drive side on Odin, but the full yoke seems a fair bit stiffer, though a little heavier.  It could probably see some material safely removed yet, but time adds up fast on these things.  It would seem I have a knack for building 29 pound single speeds.  I'll get you all some build pics here soon.  The build turned out real nice, unfortunately we got pounded with two feet of new snow to effectively close our early season trail riding for a while.  Sedona here we come!