The Kickoff to Summer

Well it was a weekend filled with riding bikes and drinking too much beer and it couldn't have been more fun.  I pretty much have a four day weekend from the school job every week so it affords lots of adventure time.  I managed three big rides in as many days, put on one event and attended another in another town and even got in some creek time down south of here.

Saturday's fun brought a crew of folks from Flagstaff down to visit our friends in Prescott for a lap on the not exactly complete, but completely ridable Circle Trail.  We'd be up before the sun making coffee and managed to stall the ride time of the locals there by only a few minutes.  We started out up a 40 minute singletrack climb heading west from Whitespar Campground.  We were rewarded with super buffed out trails on crumbled granite soils that twist and turn through the ponderosa and chaparral of the high desert forest.  The trails of the Prescott area were described to me as the spokes of a wheel leaving town and we were riding the rim across all the spokes, so traffic was always present.  We weren't even the largest group even though we numbered always greater than ten.  By the time we reached the north end of town by Granite Mountain we had decended into high desert grasslands.  Not only had the trees been left in the dust but so had the trail.  This is where I think the circle trail gets its name.  From here you wind around in circles trying to find your way only to return to the same spot two or three more times.  Luckily I had no responsibility in the and was just able to follow along.  Eventually you end up jumping a fence and bushwhacking to the highway twenty feet over there down the embankment... 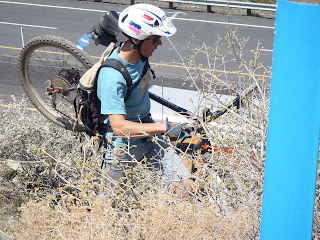 Then we hopped a guardrail and the other side became the trail we picked up.  Circles were made.  Bonus hill climbs were taken.  I was the first to get off and walk.  It seemed faster many times over than pedaling a singlespeed....the wrong singlespeed at that.  Prescott isn't really the town for a bike that points straight down...they like twenty nine inch singlespeeds with v-brakes.  And for good reason.  The biggest bumps we hit were those made by horse hooves in the mud that then dried.  Think fast and buff...and some highways. 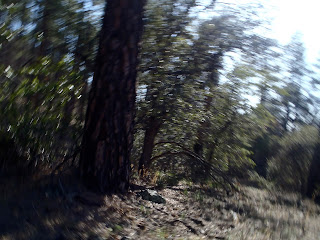 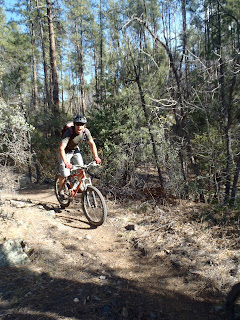 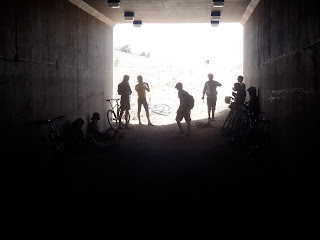 In the end all this was for Joe's Birthday and we would end up back over at he and Amber's place to cook out and party at the site of their new homestead.  Not many people I know are lucky enough to have creek access, let alone a private creek....and in Arizona??  Their property is pretty unreal.  Its in a sweet canyon in the mountains south of Prescott and right at the transition from ponderosa forest to high desert.  Thanks for the ride and happy birthday Jose!

We rallied our way back to Flagstaff early in the morning for the Baah!  It was set to kick off at noon, but we wouldn't end up being anywhere near prompt.  Thanks to all who delayed the game to let everyone participate.  The cool thing about the Baah is the random people who show up.  They are the ones who leave the most stoked.  They come in all shapes and forms, but are usually unsuspecting of the mayhem.  The pre-ride gathering allowed for proper socialization and checking out of people's beaster sunday best.  The church ladies undoubtedly took the cake here.... 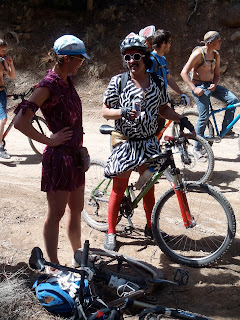 This year also brought about the first ever Baah Run and not a soul wasn't impressed with KP's run up Mount Elden and back down and around. 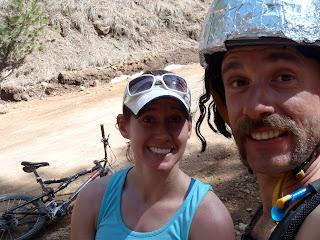 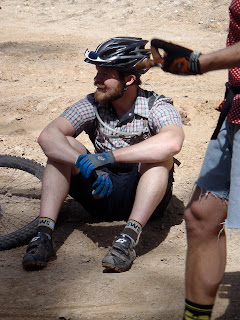 Mister Wanderlust showed up with two growlers of his fine Wanderlust Brew, a Belgian Pale Ale and an Oatmeal Stout.  Seriously folks, this is exciting....Mister WL is opening up a brewery right here in good ol' F-town, but the catch here is that his beer is actually good.  Revision...his beer is great.  Now many would say we have plenty of breweries here....but people if you've ever had a good beer, for instance something from Amnesia brewing in Portland, Bitterroot Brewing in Montana, or Terrapin in Georgia and try to compare it with something currently made in our fine town I would think you'd be able to taste the difference.  We have no good beer.  The standard isn't set high.  I would go to say that there isn't even a bar.  That's what makes this project so exciting.  This brew is on par with great beers of regions known for great beer.

Sorry...side rant...back to the ride.  We climb to the top of Mount Elden as a tribute to the goats that have lived there ferule for who knows how long.  Usually its a fairly social pace but after the delayed start tensions and nerves ran high and the weather was unseasonably warm and the ride scurried on to the top.  I the past we've done this race back down the road in the tradition of repack but this year begged something different....the Heart trail....probably the least ridden trail in Flagstaff.  Two miles dropping about 1700 feet down a cobbled, switchbacked fire scar on the eastern face dropping out off into no man's land.  One thing common to all Baah rides, though is the shotgun lemans start.  Shotgun a beer, slam the can, run to bike, ride off.  The race is won and lost in the shotgun and the Heinchez was out to defend his two year title.  Church lady Dre blew the whistle and the beers were down in a matter of seconds.  Heinchez taking the hole-shot.  That damn Okie sure can put down a beer.  I was only a second behind him.  Half a mile of road would thin the pack a bit more finding riders spinning out singlespeed gears and maxing out effort on rigid forks.  And oddly enough no full suspension bikes managed to pedal past.  Coming to a skidding right turn the sunset trail takes off uphill for a short but lung burning climb to the section known as catwalk.  Heinchez is still in sight but he's pulling away on the climb as my legs feel pretty blown.  Then at the very top to my dismay, Mister Wanderlust passes me by on the right as I make a fouled move through the only remaining snowdrift.  From the catwalk its all downhill.  I'm on WL's wheel watching him take lines I don't really like from all too close...waiting for my chance to make a move.  I miss the turn for heart trail and we start down the cobbles and switch backs.  Three or four and I'm still on WL's wheel waiting when I remembered the cream puff and the cyclo-cross move, the walking pass.  I asked WL if he'd seen the Heinchez....he was gone....outta sight.  Damn.  I went for the pass on WL going into a switchback getting off my bike and jumping trail down in front of him, pedaling on.  A few more switchbacks and the Heinchez popped up, off the trail, like a gopher, dazed, his bike nowhere to be seen.  I asked if he was alright.  He said he thought so.  I was in the lead.  WL was gone.  The Heart trail winds on after its elevation is lost initially in steadiness.  But now I was alone and would remain that way for a few minutes after reaching the bottom.  Mister WL would come and join me followed by the Heinchez who had crashed and flatted, The Viking and Odin, Zach and the Buffalo Poacher who had also crashed--his arms were so fried that he couldn't extend them and walked around like a T-rex for the next ten minutes.  Then the full suspension bikes started trickling in.  Then Naw.  Then KP the Baah Runner.  Then the church ladies and the moonman
and Cus'n Dave and Aqua. 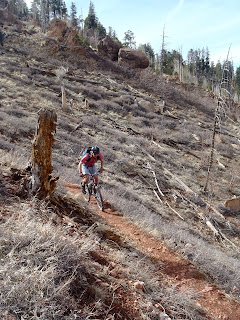 It was Heinchez's race to lose 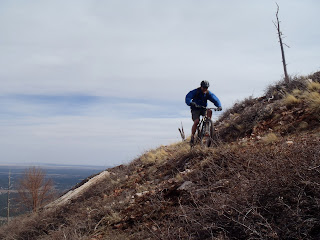 The Viking and Odin 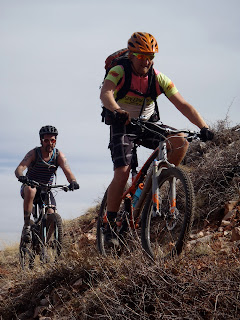 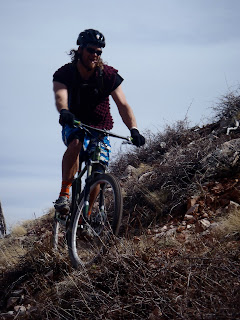 This dude Moose showed up after I told him about the event the week before and came in the full spirit.  He had on this sweet sleeveless sweater and refused to take it off in honor of the goat.  It was his wool.  Pretty bad ass.  Oh yeah, he's totally about to eat it right here. 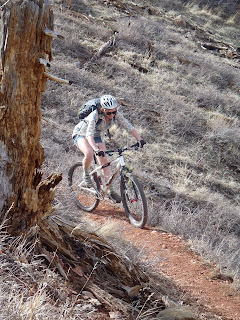 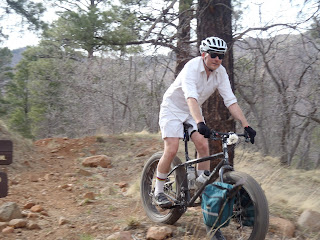 Moonman and the moon bike.  I would have thought this would have been a great bike for this trail but Moonman said otherwise. 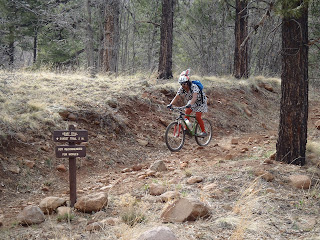 One Church Lady on a bicycle. 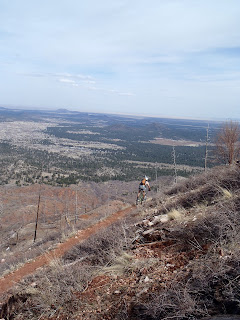 Space Lemmy chases down the field. 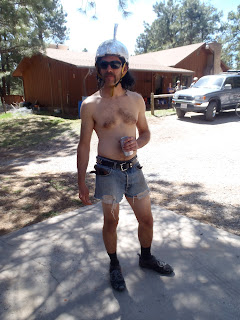 At trail's end we regrouped for the customary beaster egg hunt and consumed everything to be found before returning to the ranch for the after party.  Baah Ride three would be the greatest yet.  I think all the fools that we roped into coming along would agree.  If not, Space Lemmy doesn't really care.  Cheers.

Posted by Richardo at 14:28 No comments:

Here It Is.  Year three of the Baah Ride.  I've been wondering if it would happen again but a slight alteration of the course has me pumped more than ever.  Other people too.  The course is noted on the flyer.  The rest will only be amplified from the previous years. 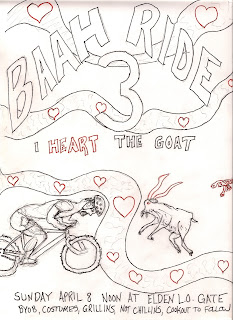 here's a random list of why the Baah is cooler than you know:

3.)  Mt. Elden is one of the coolest topographic features here in Flagstaff and many cool rides start here with a trip to the top, as does the Baah for instance.

5.)  Ridiculousness is awesome, there will be plenty of that.

6.)  The goat is awesome, it (they) have been subsisting on the mountain in some feral state since they were herded here (Spanish sheep hearding could have been in the area as early as the late 1600s, though its history is unrecorded).  They've been here longer than you have.

7.)  Pan, half goat half man, was known in ancient Greek mythology for fertility and the coming of spring.

8.)  Might I note that the Baah takes place on (B)easter Sunday?  Somehow this just seems a little more appropriate ritual and falls a little closer to home than an easter bunny.

Oh yeah, I've been doing a lot of coloring activities so feel free to print out and color the full size flyer for full effect.  It just worked out that way.  As did everything else you read here.

Posted by Richardo at 21:20 No comments: