I  have the good fortune of knowing the most amazing and ridiculous people on the planet and, good for me, they all seem to like riding bikes and are also in some state of alternative or self or un-employment and can spend a random three or four days of any given week dropping everything to take a quick and relatively unplanned bike tour.  The lack of planning only adds up points in the ridiculous equation and as our packing lists were minimal we wound up compiling quite the odd assortments of goods and whatnot to fill our bags.  A trip to the grocery store yielded a great variety of ride food for Zach and myself.  We packed a ham, a Tillamook baby loaf, twelve bagels, oysters, sardines, a three pound submarine sandwich, four blocks of cream cheese, some fresh fruit, and plenty of whiskey of course.  Oh yeah, that coffee cake looked pretty good too for $5 so I figured I'd strap that along as well.  It became known as der Kuchen.  We would be riding the 80 mile section of hand built singletrack connecting Mayer to Greater Phoenix that has emerged in the past couple years as the Black Canyon Trail and would connect the ends via shuttle.  And as shuttles go this one definitely maximizes the ratio of ride to drive time.  One hour shuttle drive for three full days of riding.  We set the shuttle Tuesday night and the rest of the crew met up at the start first thing wednesday morning to the sprawled out bags and foods of our camp at the dirt road on the ridge (read: the non-existent trailhead) 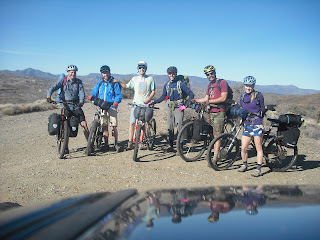 Within moments of our departure on bike, we knew through the shared conscious that we were onto a great thing.  The trail showed great promise immediately as it snaked through the gray rocks and prickly pear cactus of the high desert grasslands.  Most if not all of the land the trail passes through is BLM so it is open to grazing (read: there isn't much grass in the grassland).  By the end we would drop about 3000 undulating feet at the base of the Bradshaw Mountains, crossing its fingered lower slopes as we traveled.  Our hoots and hollers carried us through to plenty of rest stops and two creekbed campsites with trickling winter desert flows and only a minimum of navigational difficulties. 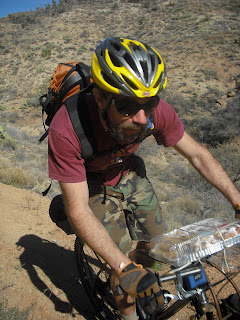 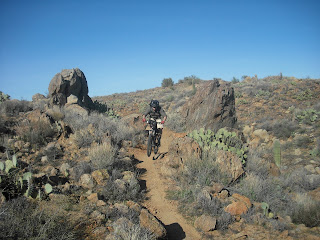 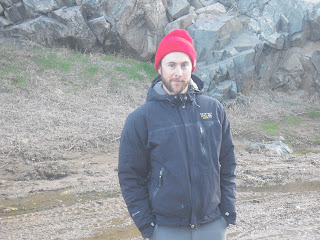 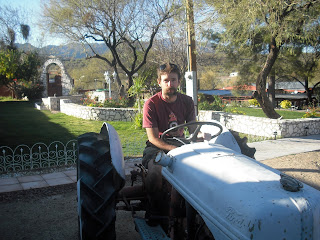 It makes me sad when my tractor doesn't work 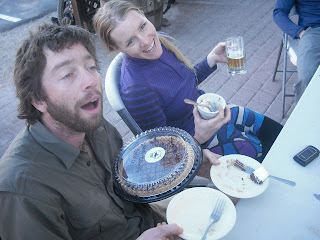 We stopped at Rock Springs for food and pie and wound up calling it a day after that.  We left with two whole pies and I think about four pieces were eaten onsite in addition to that we brought with...that was after beer and burgers of course.  With der Kuchen there was pie everyday. 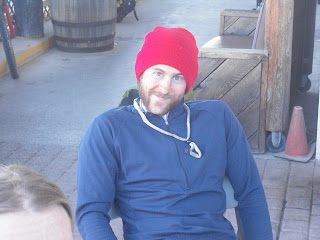 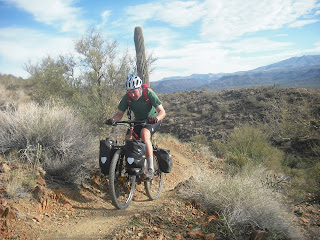 Saguaro cactus started to emerge after dropping off the rim where Uncle Rico parked his van....I wish I had a picture of that van. 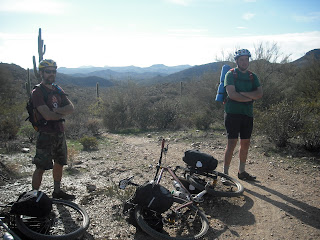 Hey Evan: what do you think of this trail.  Its alright.  Yeah I've seen better. 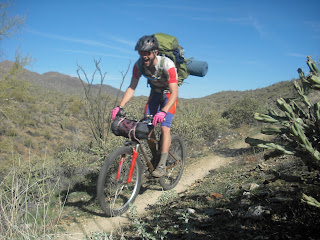 Some people don't have panniers but that doesn't stop them from looking good or going on a tour. 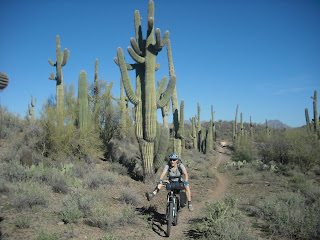 The sequence of Amber riding through the cactus forest no hands lead to a crash of her ghetto booty Kona so she opted try the safer no feet sequence. 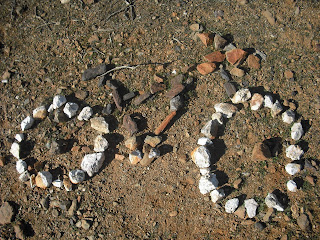 These things are cool 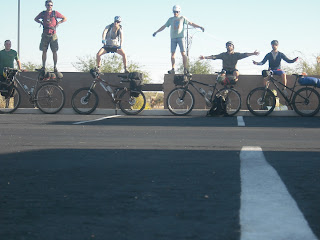 The last ten or so miles was flat desert straight dirt and cactus to puncture your tires with a prison for scenery followed by a road and a parking lot with Evan's truck waiting for us.  It was a grind...so really the trail is about 70 miles if you stick to the good parts but man o man are they good.  Ride this trail with your friends and you will laugh a lot I promise.  Bye

The Strip Teaser vs. the Fu Manchu.  Flavor Saver vs. Teenage Fuzz.  We're talking a Moustache face off here...Twenty Six vs. Twenty Nine.

You'll spy the competitors on the ground next to one another....Shrek on the left, the 26" monster, Odin on the right, 29" of viking war god, and in the background along for the fun is tried and true number two.  The two bikes facing off feature the exact same tube set with only minor differences in configuration to achieve what I felt was the best possible ride for their given platforms (Long-ish travel front ends and big tires=maximum shredability) and intended use (The viking rides trials, I ride trails...but we have a fair degree of overlap in what we ride). 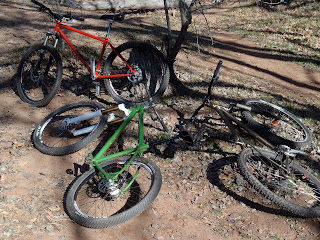 The tubes are a mix of True Temper Supertherm, Pacenti Heavy Mettle, and good ol' 4130 straight gauge and feature a Paragon Machine Works 44 mm head tube.  The Effective top tube on both bikes measures 607 mm.  The minimum chain stay length on both is about 415 mm with horizontal dropouts handling tensioning duties for single speed use and positioning the rear axle a little more forward on Odin.  Both bikes are running tapered head tube, 20 mm thru axle forks with 140 mm travel, though the 29er was designed for 120 everything is rotated back a bit (slacker head and seat angles, higher BB, weight a little more over the rear axle). 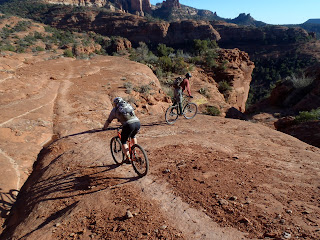 I traded bikes with the VIKING in the parking lot and after riding the last week on my new green monster, I quickly noticed the slight changes in position and setup as well as the energy needed to push the larger wheels.  As I was noticing the subtleties of the ride the VIKING instantly started his hops and spins and nose wheelies.  His comment..."this is more stable."  And I noted equally that his front end was a bit easier to lift...sounds a bit backward but Odin is no ordinary 29.  A few millimeters over your rear axle makes a huge difference.  We climbed a rolling climb and by the end I felt completely at home on the VIKING's steed.  I could have dealt with a few minor tweaks, but in the end it was hard to give it back.  My only complaint with a big wheel beast such as this is minor...I get tired of turning over the big wheel up climbs.  The end.  Its an awesome bike and a great platform for many riders when done "right".  This one is the VIKING's and I'd say its done right for him...though his beefed out war god is certainly not for everybody.  Did I mention he rides TRIALS?

Right - handles playfully to the degree the rider is willing, carves turns precisely, climbs and descends confidently, responsive to body english in handling, front wheel lifts without being a major production, and is all around fun to ride....usually this does not exist off the shelf. 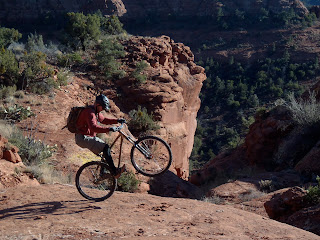 Hopping back on my green monster, I found the transition a little odd in the same ways concerning setup, but quickly nestled back into the bike I've been feeling increasingly confident riding everyday.  We cruised down the twists of slim shady wheel to wheel, but I kept wondering how the other bike would ride this.  No disrespect to my own, I think I've just settled into it feeling familiar (certainly not a bad thing), and this Odin bike was unfamiliar in such a curious way that I wanted more.  At one point I told the VIKING that it might just be best if I didn't ride your bike. 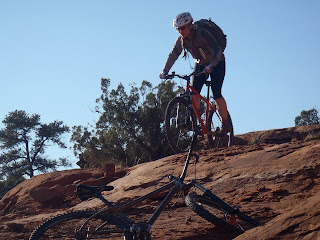 We pedaled around the rock features of Sedona for hours stopping to hit the play lines on the rock slabs but we stuck to our own as far as the bikes go.  I settled back into my groove and finished the day loving my bike at least as much as I had the day before.  It does what it does so well...going down hill, catching air, letting me get away with the sloppiest lines I've ever ridden, letting me ride the biggest lines I've ridden on any hard tail with endless confidence....I'm even learning to get it up the tight climbs without pushing.  Its a super fun bike and at the end of a long ride I still feel like turning that wheel over. 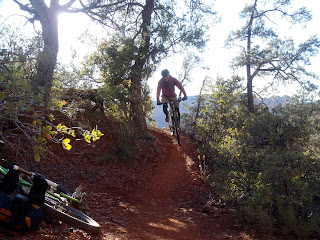 Cheers to options and indecision....now how about one of those 650b bikes!

Posted by Richardo at 20:43 No comments:

1.  To exponentially increase the volume of music in my "retro" collection....as inspired by the radio show formerly known as "The House of Retro-Pleasure."

3.  Do stuff....namely make adventures and ride bikes like this one....my new one a long time in the works. 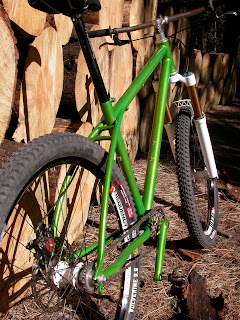 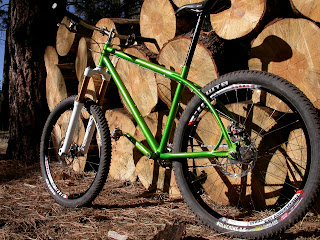 I've been in Sedona the last three days sending out the old year and ringing in the new one in a T-shirt and shorts testing out this green monster.  Its spec'd with some new goodies from Chris King, Profile and WTB such as the new Frequency i23 rims which laced up quite nicely.  The fork is a Fox Float 36 thru axle with a 1.5 inch tapered steerer necked down to 140mm of travel.  Old school 26" wheels for the catching of air wherever possible and cuz I just get tired of spinning 29" up long climbs.  Angles are 68.5/72 HT/ST.  And no it isn't light, but it does fly.  Any questions?

Happy New Year to all yous reading out there.