The Green Plastic Bin of the Dells 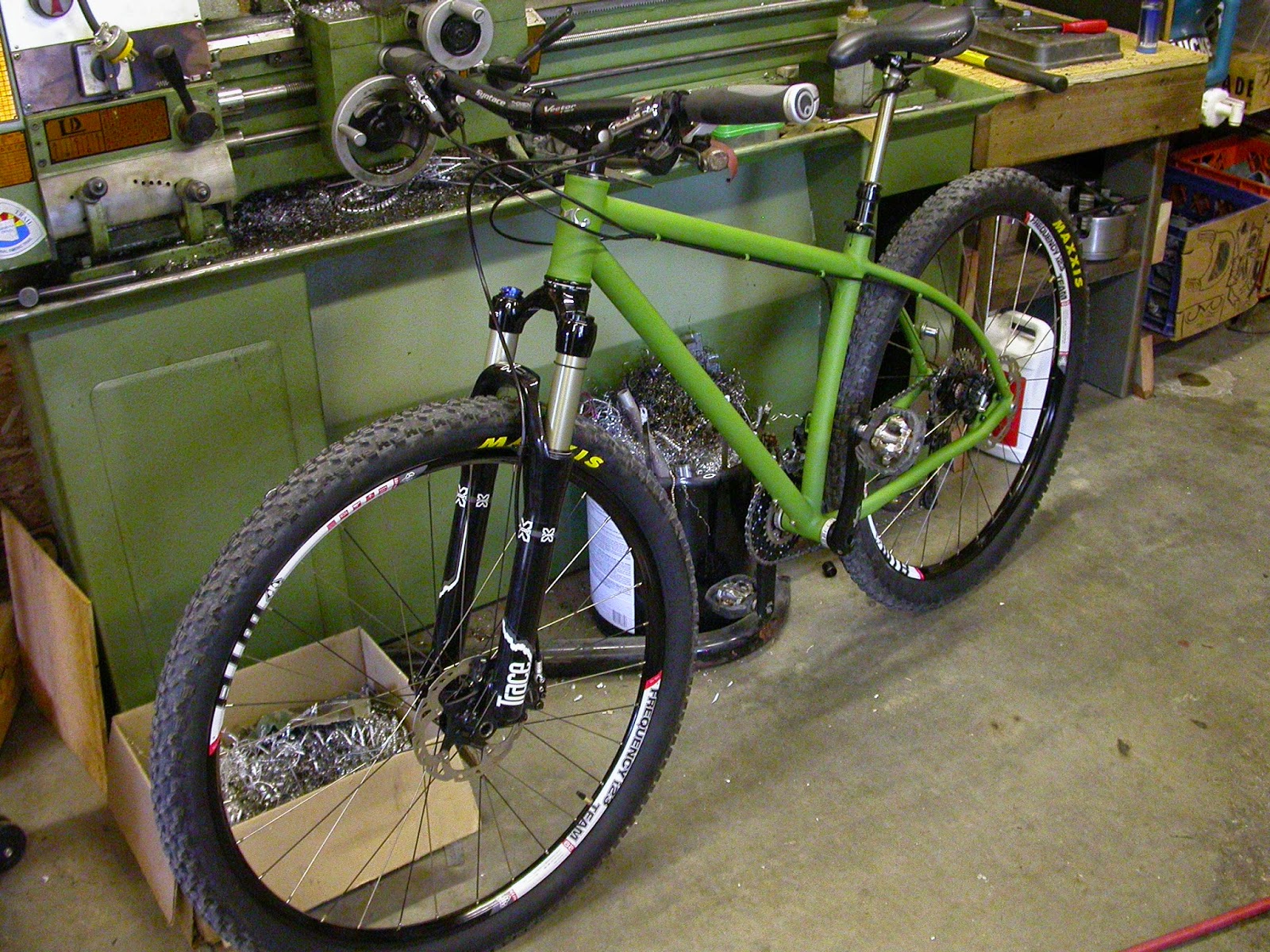 This project started off as many do, with a ride.  Matt has been riding mountain bikes for as long as I have, maybe longer, and mostly here in AZ.  When the call came for a new bike, Matt had gotten to steal a ride on a friend's custom 29er.  He was thrilled and raved about it.  I figured it was time to take a trip down to Prescott to sample some of their geology.  Prescott riding is great, some of the best in Arizona.  Its super accessible, but offers most of what can be found in both Flagstaff and Sedona, with an added element of backcountry remoteness that gets a little harder to find in my part of the state.  I asked Matt to take me on two rides that would exhibit the opposite ends of the Prescott riding spectrum.  I brought Shrek down to see how 26" wheels and Flagstaff steep build would fair and met my riding buddies at the Granite Dells north of Prescott for a day of technical mayhem. 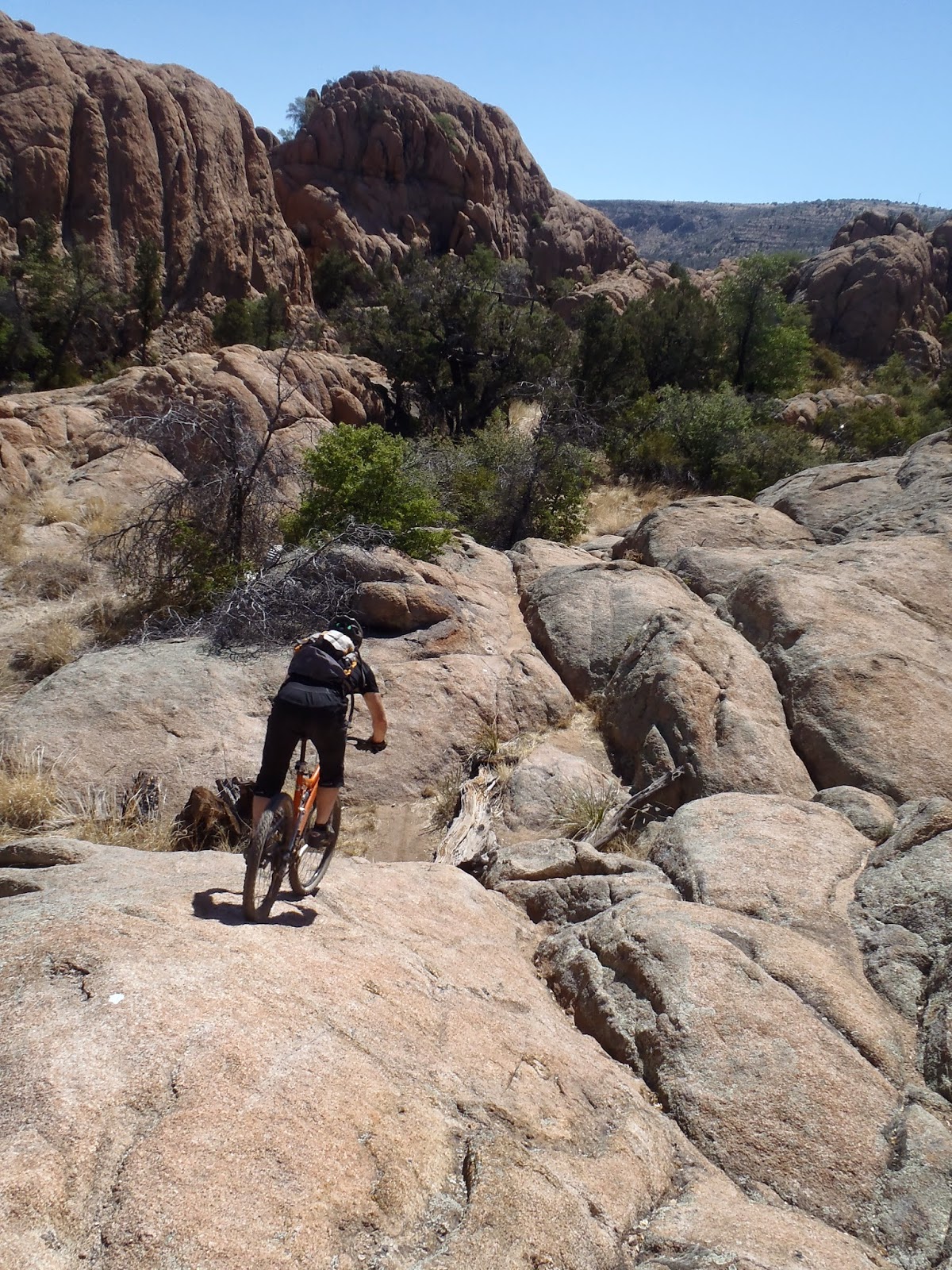 Commonly the response of the people we encountered that day (hikers) was one of shock and disgust.  "You people ride your BIKES here?"  The dells offer the best in Arizona trials, straight out of the '90s. No doubt Hans Rey hisself has spent some time here.  Where Sedona gets off on big lines and picturesque landscapes to find itself pictured in nearly every magazine in print today, the Dells are just a little bit too far to the left to be mainstream.  What I mean is that even the most advanced riders at some point will be walking, or at least trying moves again, and always looking off line to see what else can be ridden.  The cool part is that as long as one is willing to try moves without getting discouraged, the area is actually quite friendly for group rides of multiple skill levels.  As slower riders make their way through challenges its never as though anyone is waiting with the surrounding playground.  At several of these points we stopped to make the bike switches.  What Matt was capable of aboard the 29er was instantly obvious to those of us watching him.  He had the confidence of a cat in native habitat instead of what more looked more like an uncoordinated ungulate taking its first steps.  The difference watching a truly seasoned rider was shocking.  We all saw it.  Aboard my bike I told him exactly what to expect, it is not as balanced and favors the downhill.  He jumped on for a move that transitions from a steep down into a steep up with a wheelie move in the transition.  He spit himself right off the back of my short stay 26er, just as I told him he would.

Our second day riding started with a familiar climb to the top of Mount Union in the Bradshaw range to descend the Yankee Doodle trail.  We and some others had done the first part of this trail on the last Intro to Bike Packing trip.  The first part would be dissuasive let us say.  Chunderry loose big rock rubble.  And while this fairly continues the whole way back down, the rubble does find its interruptions with fast sections of forest trail and near unnavigable rock drops.  This is the backcountry of the Prescott National Forest, usually only accessed by motos; it is in this steep terrain that my own bike shines.  Matt on his twelve year old full suspension Yeti, couldn't find the comfort zone of his bike in this rubble, and if it wasn't clear from the day before, it certainly was now.  He is riding beyond his bike's ability.  He didn't want to go faster down trails like Yankee Doodle, he just wanted to be able to make the moves with confidence.  Bearing these trails and rides in mind I went to work designing. 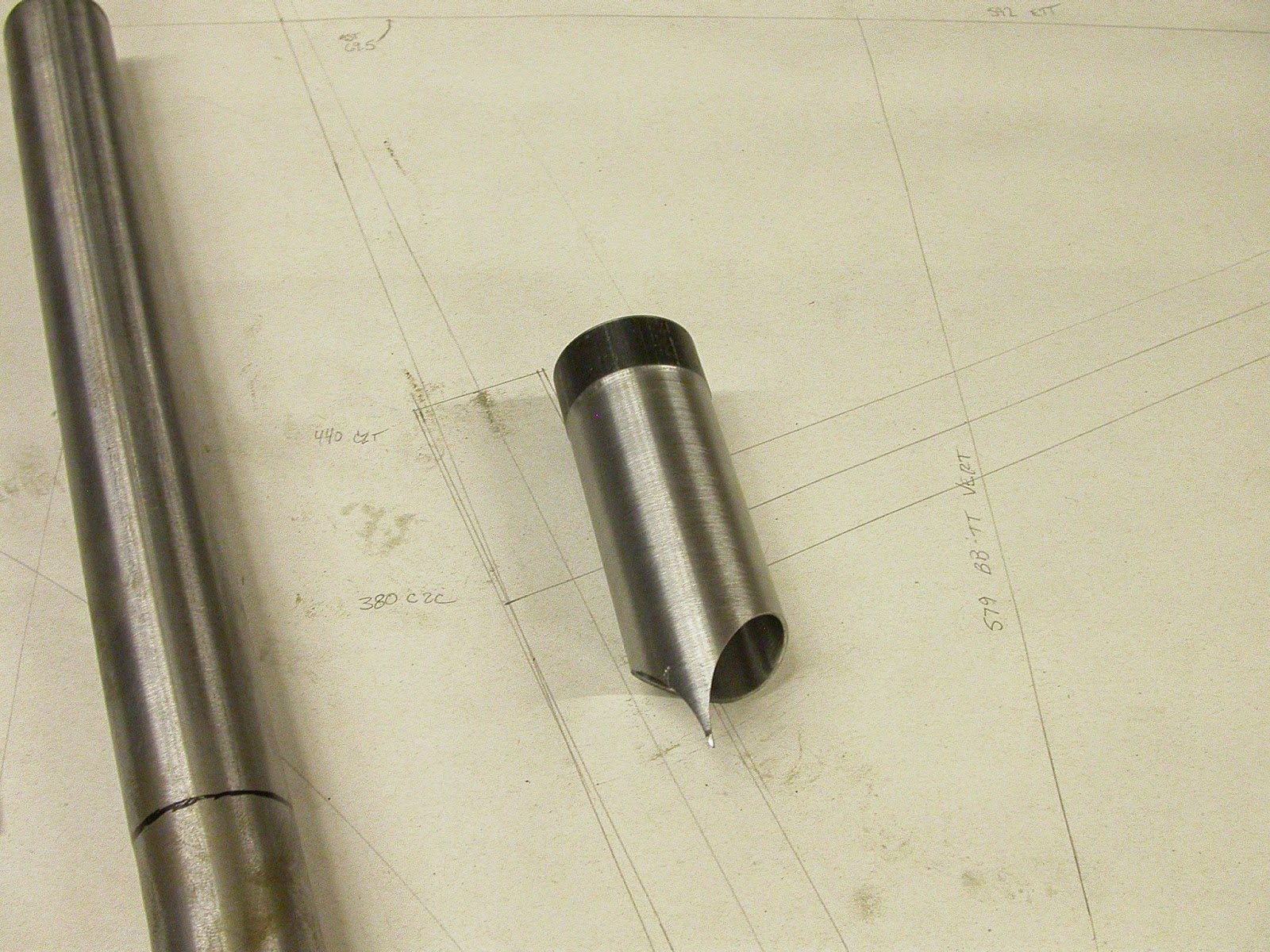 Shorter stay 29ers are among the harder bikes to build in my opinion.  The large 2.4" rear tire eats up a lot of room so accommodations need to be made.  The actual stays (bottom bracket to rear axle) measured 429mm in the design leaving the horizontal measurement (what's left when bb drop is taken out of the equasion) at 425mm.  This was long enough to use my regular chain stays instead of a plate yoke and still have clearance for an XT double crank.  In selecting that double, however, a direct mount front derailleur was mated up for maximum tire clearance.  A curved seat tube was rolled out at my neighboring builder's (and sometimes my employer's) shop.  I turned down a piece of 1 3/8" sleeve tubing to reduce weight where the material isn't needed leaving the top to fit a standard size seat collar.  These pieces are fitted into the front triangle, thought figuring for and jigging an effective seat tube angle and an actual seat tube angle provide a bit of extra challenge.  Actual seat tube angle with the curved tube on this bike is around 69 degrees with the effective at the rider's saddle position being around 72 degrees.  The bike was fitted with a Thomson 27.2mm dropper post with under the saddle lever and the front end was designed around an Xfusion 100mm travel tapered steerer fork with 34mm stanctions for stability.  Interestingly I am finding that the benefits of larger stanction forks are much more noticable aboard hard tails than they are on full suspension bikes, as the rider tends to ride more "in the fork."  With the fork being the only suspension available a more forward standing position is assumed to push the front wheel through turns and obstacles (where prudent) when braking through these moves is less needed.  This in turn affects the design in terms of wheelbase and head tube angle.  The trick here is to figure out to what degree the intended rider will find any and all of this beneficial and balance all the elements of the frame's geometry.  In this case, Matt wanted a stable and predictable ride down the hairy stuff, not to go faster, so a shorter travel fork was selected to maintain the efficiency on the uphills and undulating technical trails. 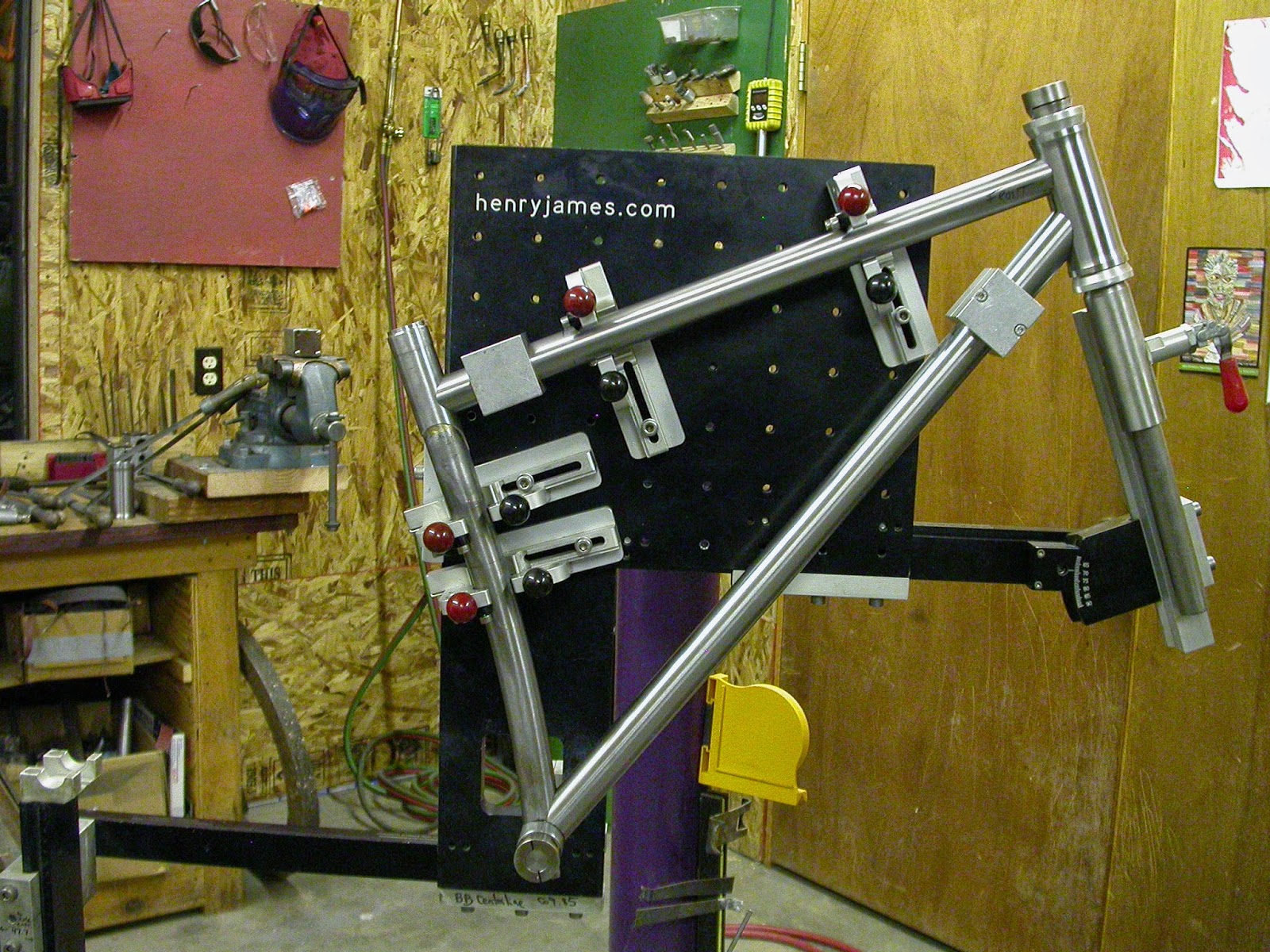 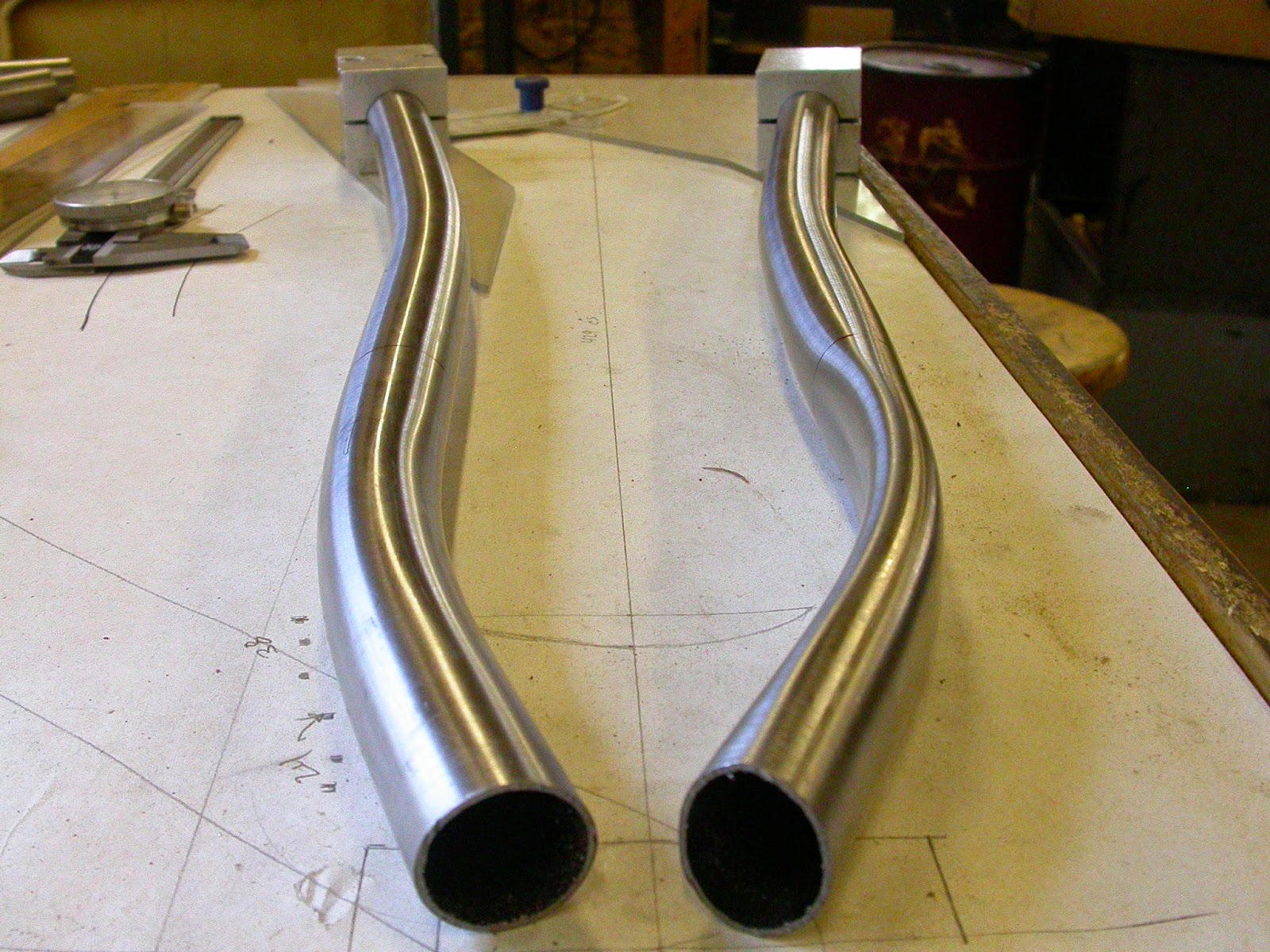 Above are the first specimens of the new custom drawn True Temper chain stay stock.  The stay on the right has the crush for tire clearance while the stay on the left just shows the raw bends laid out on the full scale overhead drawing.  These tubes will get and additional  bend clocked at 45 degrees at the rear to accommodate the disc brake on the chain stay shown in the photo below.  Dropouts are joined and brake tab attached to isolate the variables.  Then chain stays to BB is tacked.  Then seat stays bent up and mitered. 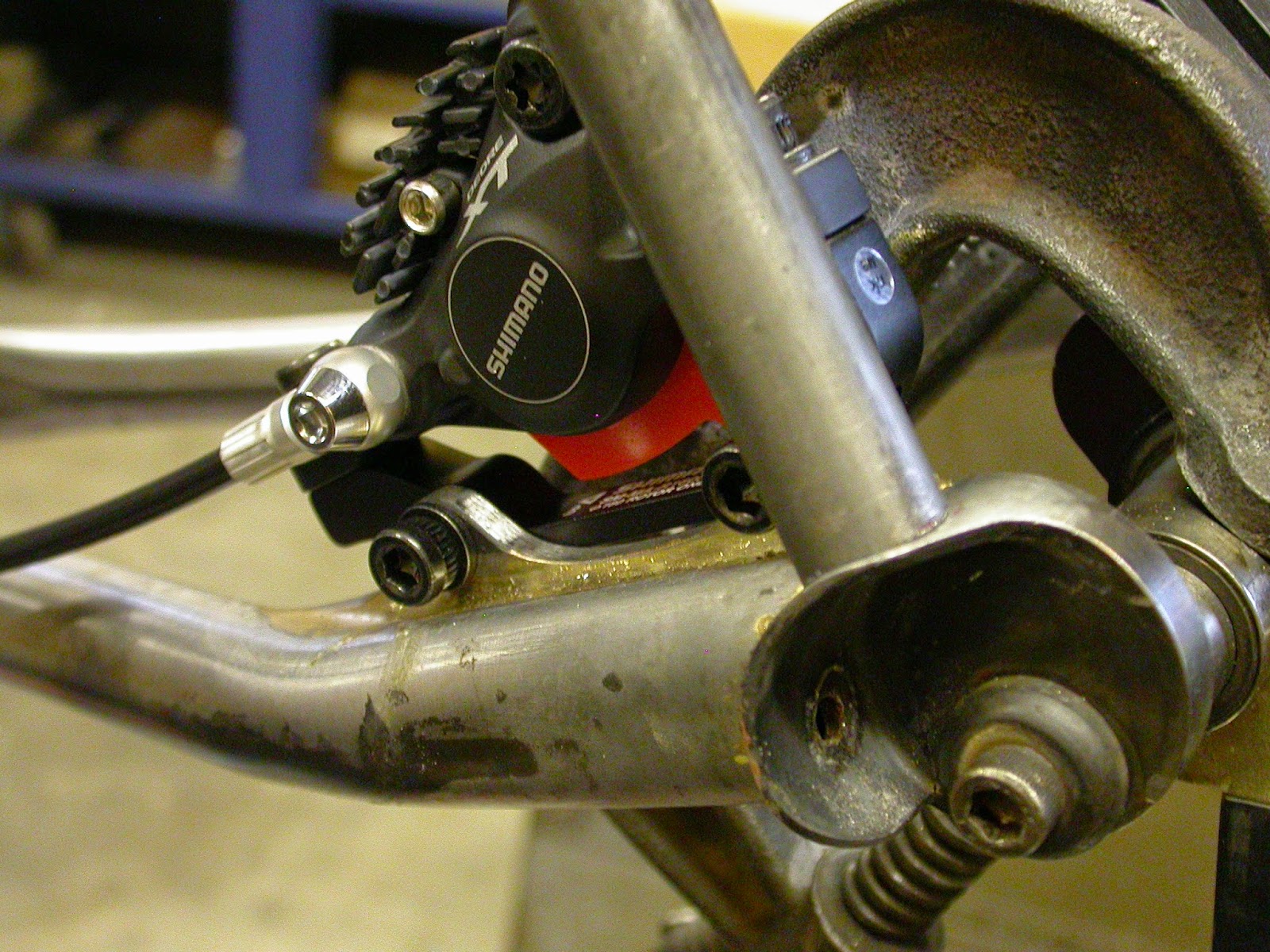 All is tacked in the jig, then removed for final brazing.  Then the real fun begins with hours and hours of polishing brass.  Finished bottom bracket assembly below. 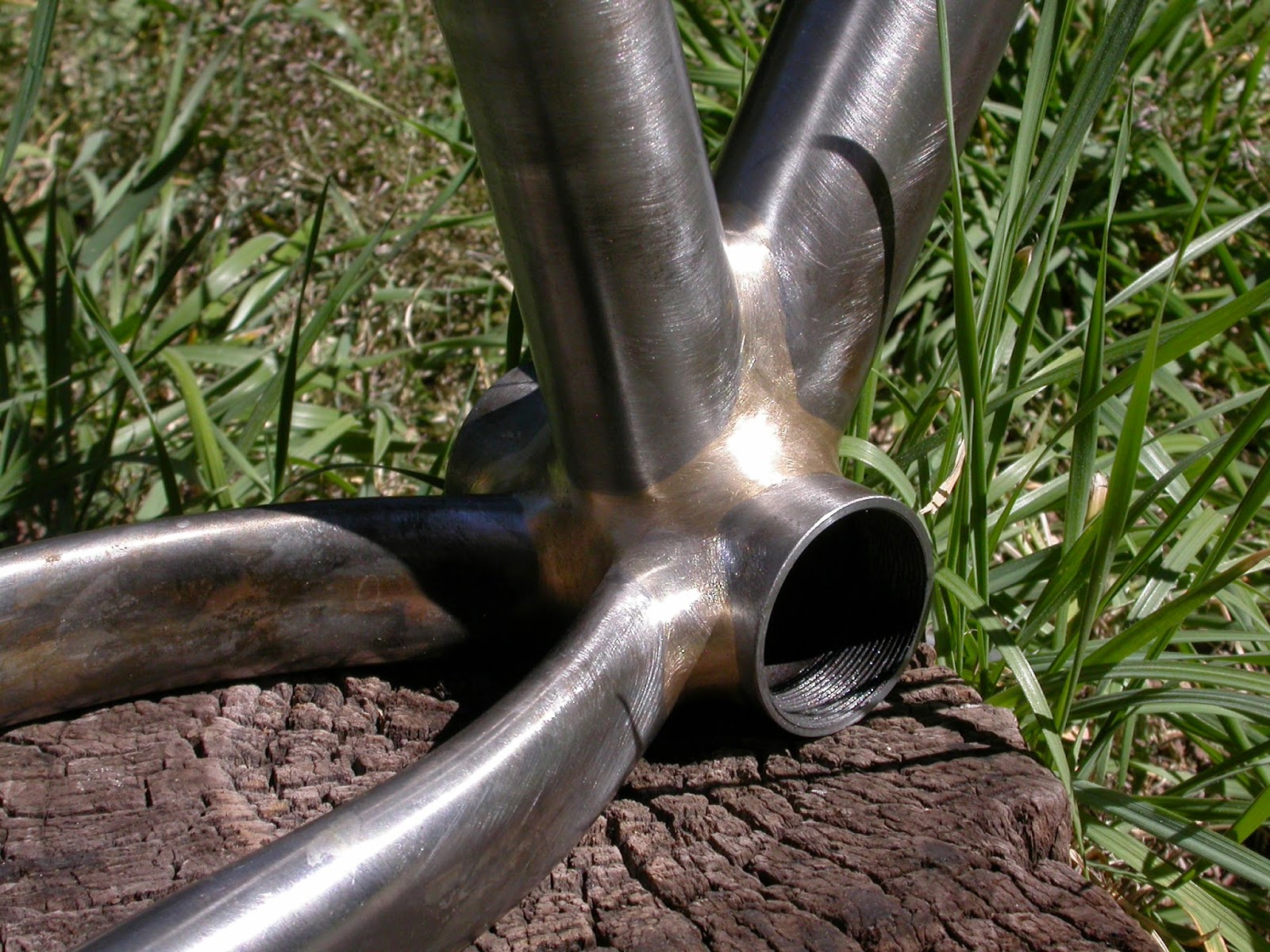 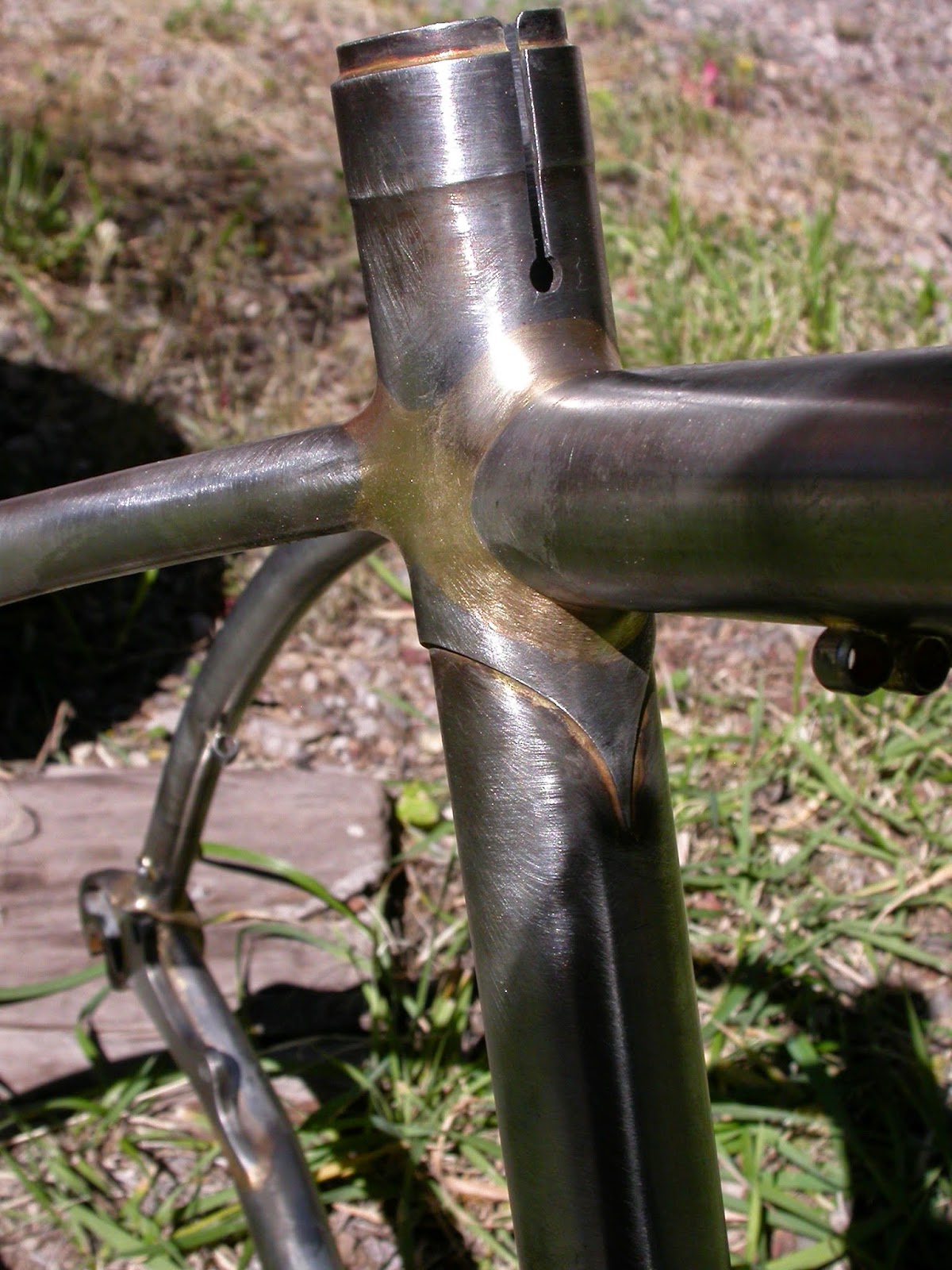 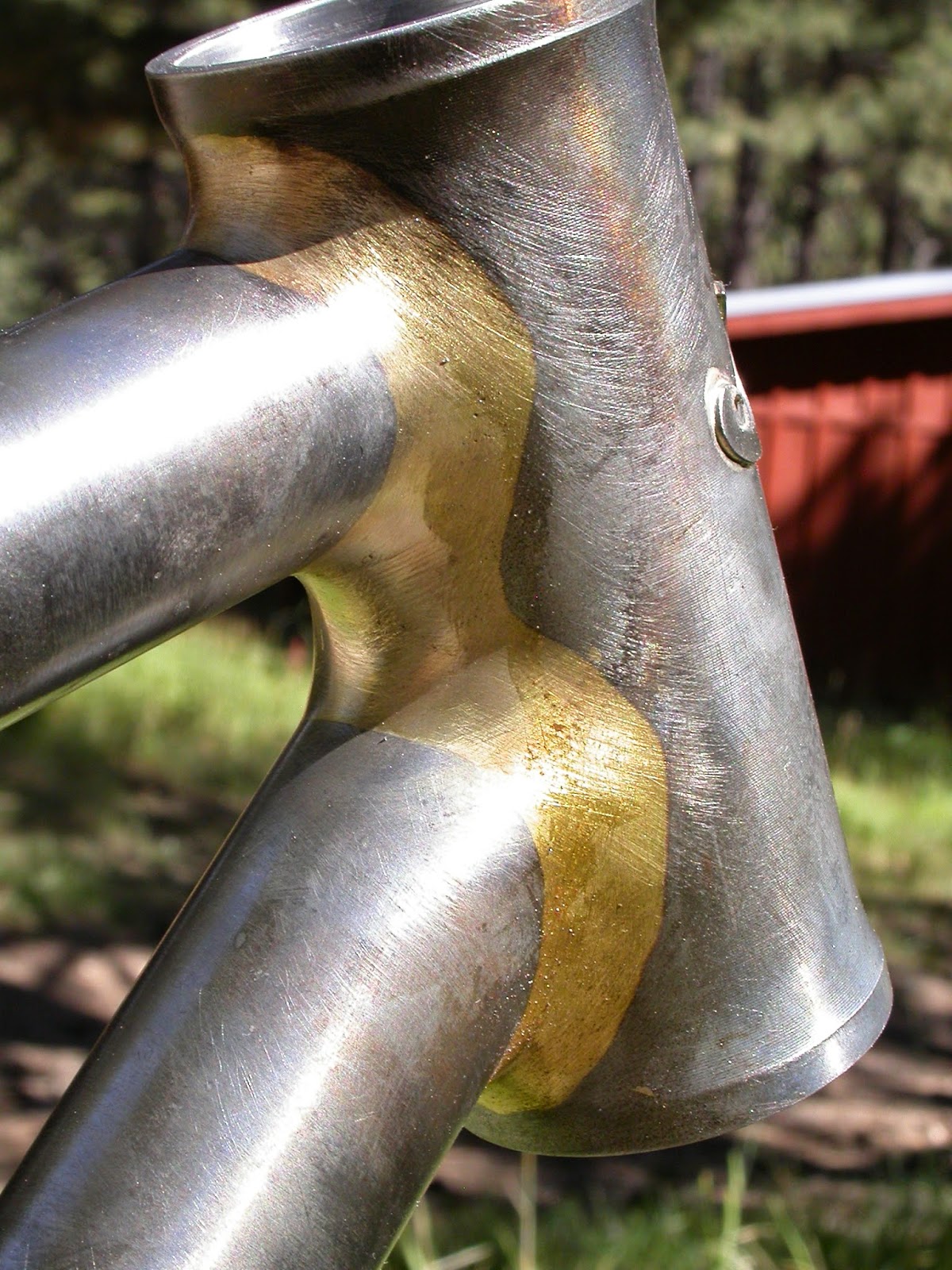 Somewhere in the process comes the time to think about paint.  I have really had the best luck picking for people with guidance, as I know what comes out of the powder shop at this point and a good description often gets better results than looking at digital color swatches over the internet.  Matt had something specific in mind for this one, however, that warranted a trip up to Flagstaff to talk with my powder shop.  He wanted a flat green.  Extra polishing on my behalf.  Flat shows every flaw.  His description of the color was:  "There's this green plastic bin." 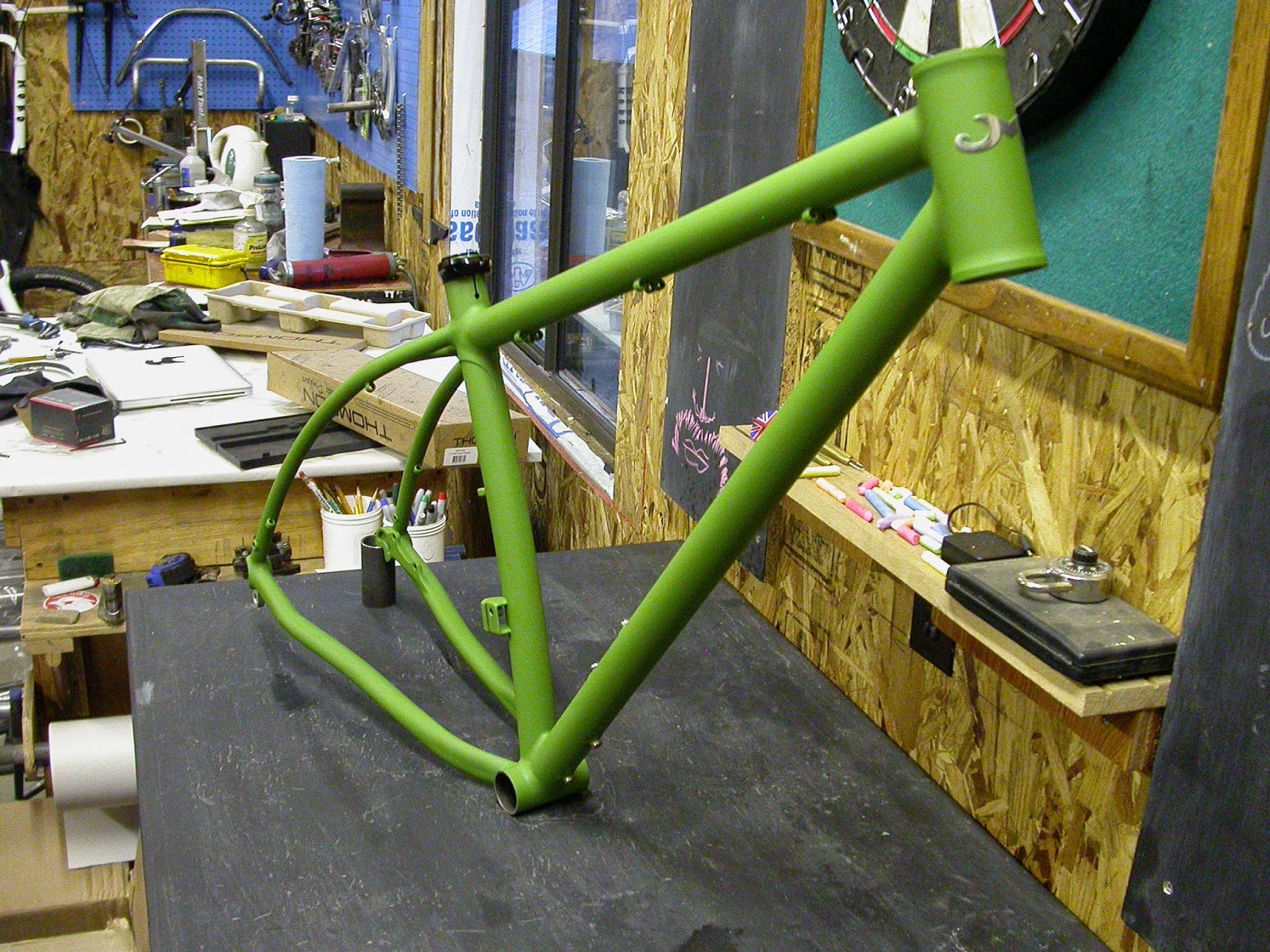 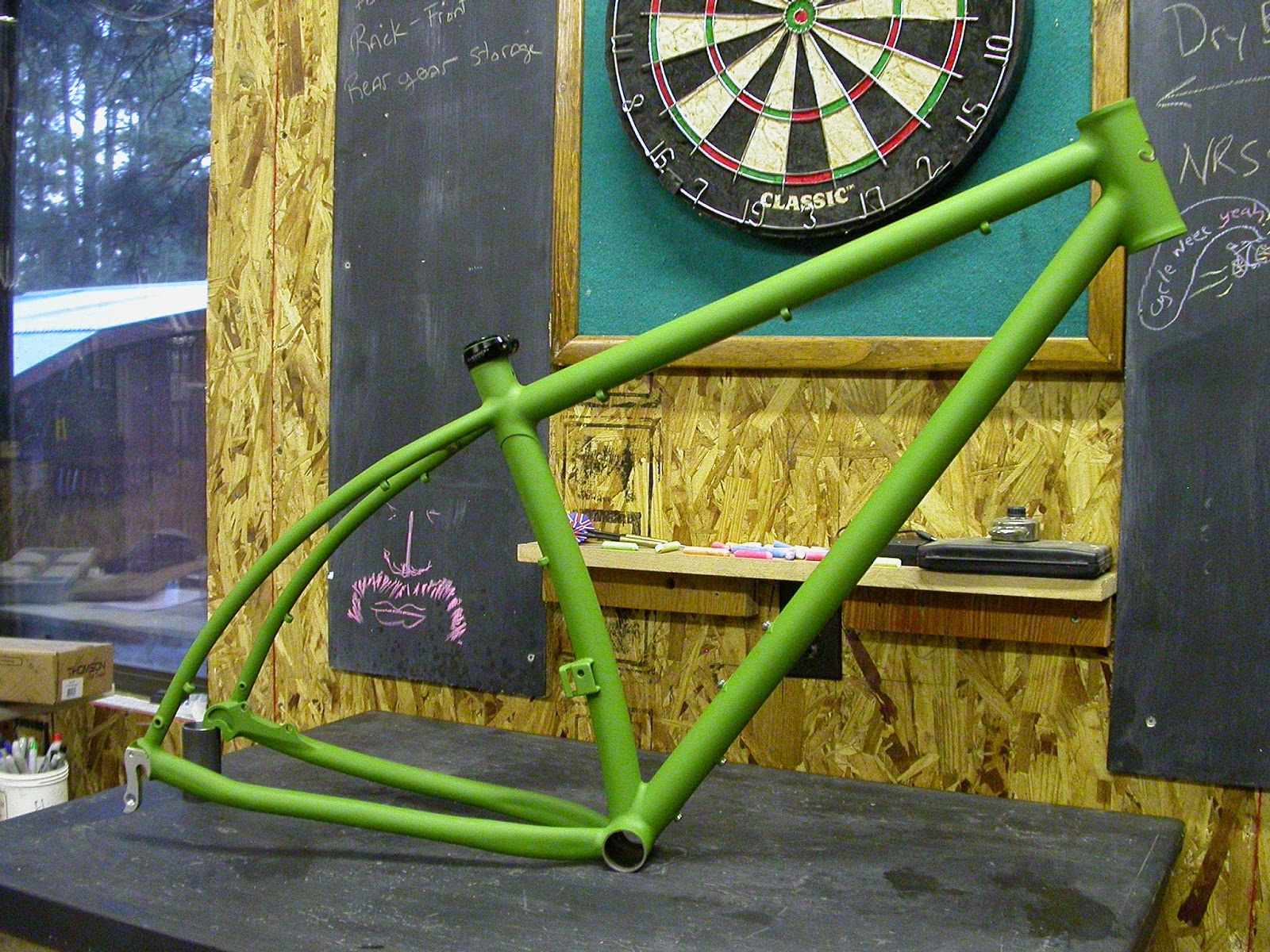 We got the bike built up in time for Matt to come up to Flagstaff for a test ride on our equivalent to the Dells, right before taking it out to the Sierra Nevada for a true test.  He was quickly out-riding me in my own back yard.  As for his extended field testing, well the words that follow are those of the rider:
Hello! So, headed back to Az, rode our last ride in Santa Cruz today. The bike has been awesome. Probably not by accident, it really came alive in my favorite ride of the trip, in South Lake Tahoe, which was quite possibly the best ride of my life. 5 hours of climbing on superbly laid out trail, fairly steep, periodic hard but rideable tech, insane views, huge trees, to a nice alpine pass. The descent was mostly through boulder strewn landscapes, but with a line through everything, some steep bouldery tech, back into the woods...
It was ideal for that bike. It turns really well, very light on its feet. And during the ride, I figured out the correct body position, which was back, of course, straighter legs and arms. In fact, especially when the seat was lowered, I found myself in positions I've never been in. So fun and fast and reactive, great on the steep steep. Its possible I e never felt more relaxed and tuned in at speed. Cool huh?
We rode three rides in Tahoe area, and they were all fantastic. The remaining two rides were south of SF and in Santa Cruz, and they were fun ripping in the forest, but nothing close to Tahoe.
So, I'm stoked. I can't wait to ride it in the dells, and the Bradshaws. It's best terrain is what it was designed for, go figure.

Thanks for the cool project, Matt.  Goats shred Trollville soon!
Posted by Richardo at 09:56 4 comments: