....No this isn't the introduction of carbon into the materials list as the commercial jet manufacturer did with their similarly titled project.  It is however in reference to the size of the project, namely the BSD.  While the aforementioned jet manufacturer likely felt similar about their project in size and scale, they are a large corporation with substantial public holding and an infrastructure that occupies the better part of a major world city; I am a guy with an impoverished affinity for tools, access to a 300 square foot shop, and the desire to make awesome bikes for people.  So to talk about the scale of this project being let's say... similar to that of the jet company... is likely the greatest understatement of the day. 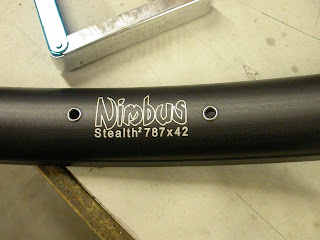 Now, I'm not really one for novelty bikes or fad, I hope my work to date speaks to that, I generally try to talk folks out of ideas that I would think to be less than good.  There have been plenty of over the top requests that I have flat out declined before even considering the time involved or final price.  More often though people's ideas are really just based in that of a good riding bicycle, but muddled with the latest hype.  With a little direction and specificity their dream is easy enough to achieve. 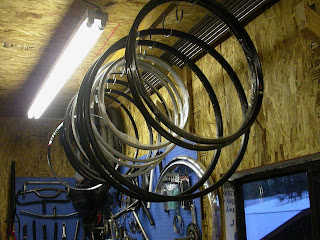 My ongoing email conversation with the Professor is as of typing this: 70 emails long.  70 emails with little more than a wheelset to show for it.  The conversation started clear back in September with the subject line "Big Bike,"  to which the Professor briefly introduced himself (as a sizeable figure that, well, let's just say Lebron James would look up to), his well worn bike collection (that included a couple other customs), and his desire (Big Bike).  He concluded by asking if I would be interested in meeting up for further conversation.  I obliged.  I had never really considered making a 36er before, nor what would go into doing so, but this proposal was 100% necessity.  The rest is me nit-picking the details of every imaginable element that could possibly be conjured into, onto, or beside a two-wheeled structure.  For the Professor, this is an object of necessity, he dwarfs his current 29er.

A good bike build starts with the hubs in hand, and with a BSD of 787 mm, and a rider weight of 285 lbs, nothing can be overlooked.  I turned to Phil Wood for the hubset... err... most of the parts of what would ultimately become the hubset.  The snow bike front hub 135 mm OLD and tandem rear hub 145 mm OLD were the last ones sitting on the shelf in 36 hole drilling.  These will work.  The reason for these hubs is the wider flange spacing allowing a similar spoke angle (flange to rim) to that of a 29er, even though the radius is nearly 3.5 inches larger:  stability.   With the hubs in hand I began to realize that the quick release configuration these were sent with just wouldn't do, so I went about turning new stainless axle ends for an in-house bolt on conversion since PW didn't have the parts.  The cool thing about these hubs is the axle is the same regardless of configuration and is internally threaded M8 x 1.25mm.  Spacers threaded onto the axle O.D. handle the interface with the frame and the location between the dropouts.  I took this opportunity to align the snow bike front hub to rear disc spacing.  This better centers the flanges and gives better disc rotor to fork blade clearance.  Onto wheel building. 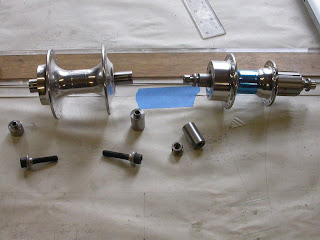 Being that this is a bike built on unicycle parts there are some things to keep in mind... namely limited parts selection.  There are these rims, maybe another choice, that lace to a choice of two or three hubs (crank attached via ISIS interface), with your choice of three lengths of 14 gauge spokes in 5 mm increments*.  Hardly a wheel builder's dream world.  With my hubs already in hand I had failed to consider the option most closely resembling the dimensions of the unicycle hubs.  Hub choice for my criteria above was already quite limited.  What came next was a wheel builder's dilemma, how to resolve making up the differences in spoke length not covered by the sizes available.  I'll let those of you still reading stew your options here. 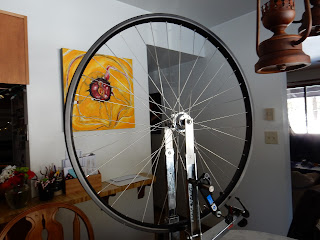 Alongside all this is the now emerging problem that none of this bike will fit my existing tooling.  From wheels and beyond, this bike is the tool-maker's project.  The goal for the rest of it is to keep things as simple as possible, but a compiled tool's built photo for this project is definitely in order.  First off, the truing stand got a 5 inch lift kit.... 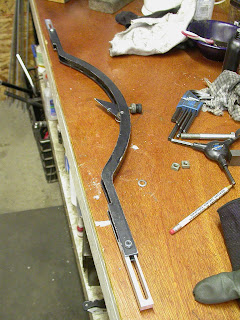 ...As did the dishing tool get an extension.

The project is now moving into the metalwork phase with a tensioned wheelset.  The front is based on a rear MTB hub spacing and 10mm axle for strength and future compatibility; the tandem spaced rear is laced offset 4.5 mm to the drive side equalizing spoke tension between hub flanges and favorably bumping the chainline; the frame will be built to accommodate.  Gear inch calculations are amplified through the large diameter wheel so a 11-36t ten speed cassette will be used along with a 28t BMX sprocket.  Everything parts wise will be chosen from the "tried and true."  To be continued...
Posted by Richardo at 09:38 No comments: