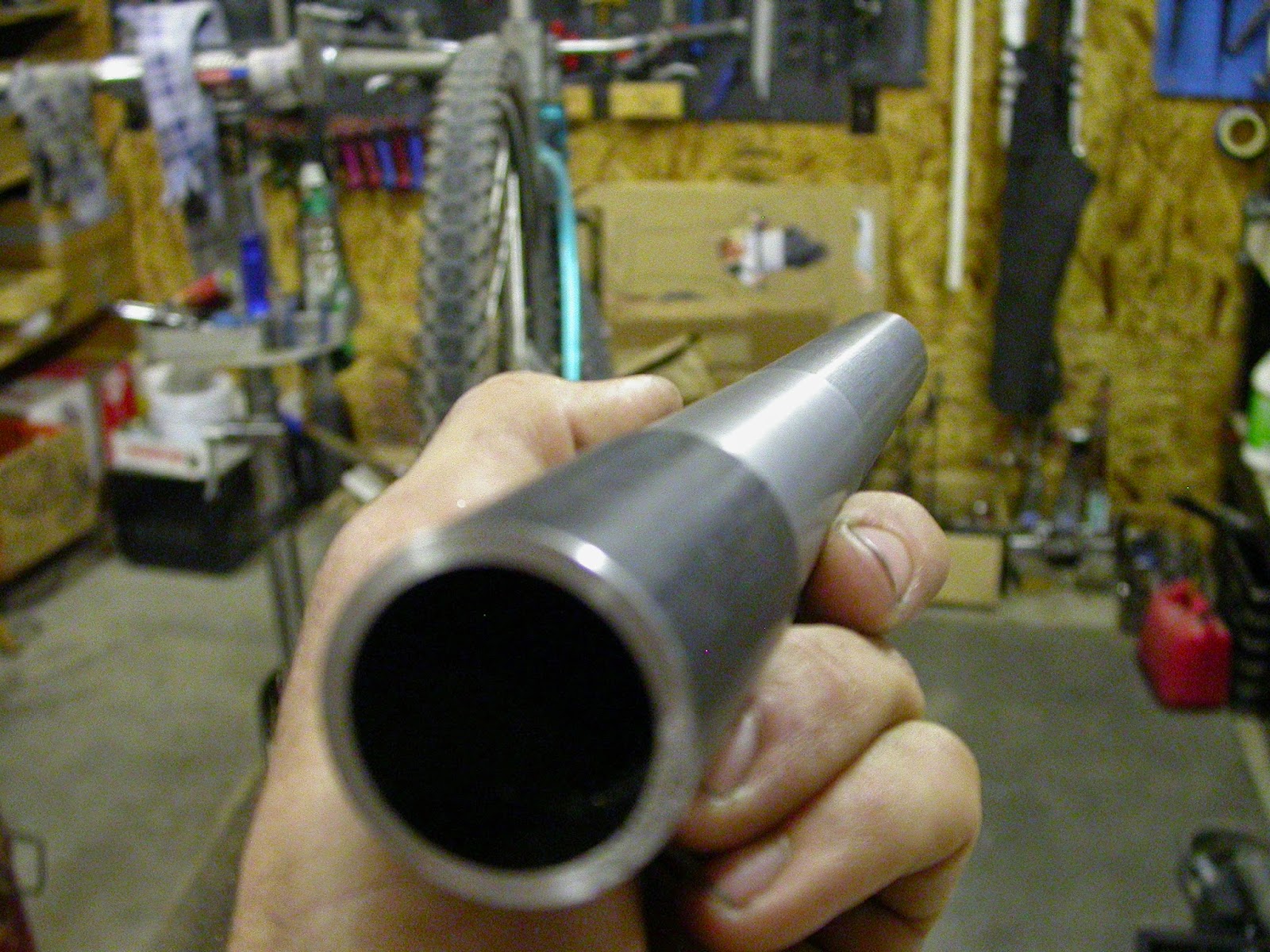 A while back after purchasing that lathe I got the idea of turning some tapered non-tapered steerer tubes that would better match up with the offering of 1 1/4" diameter unicrown blades and give a nice and thick attachment point for the fork "crown."  Prior efforts at achieving this effect were accomplished by brazing a sleeve onto the bottom of the crown to increase the diameter of a steerer tube where the fork blades attach.  Machining this piece takes one of the heat cycles out of the equation and ultimately yields what I believe is a better product as the reduction from 1 1/4" at the bottom to 1 1/8" at the stem clamp is carried inside the head tube by very gradual 0.75 degree taper rather than abruptly at the crown race seat.  This design utilizes the tried and true straight 1 1/8" headsets of any configuration (internal/external) rather than the 1 1/8" to inch and whatever taper cups that more and more bikes are going to, suspension forks or otherwise.  It should be noted that these designs do certainly have their place, particularly in the suspension world, but the reason for doing this is to create the best brazed bike I can, in this case a dedicated rigid.  This piece gives the blade's crown miter a full wrap of the steerer tube while simultaneously beefing up a part of the bike that sees more and more force applied to it with disc brakes and increasingly fatter tires.   Fat tires SUBSTANTIALLY amplify braking forces and chattery rigid forks are discouraging at best. 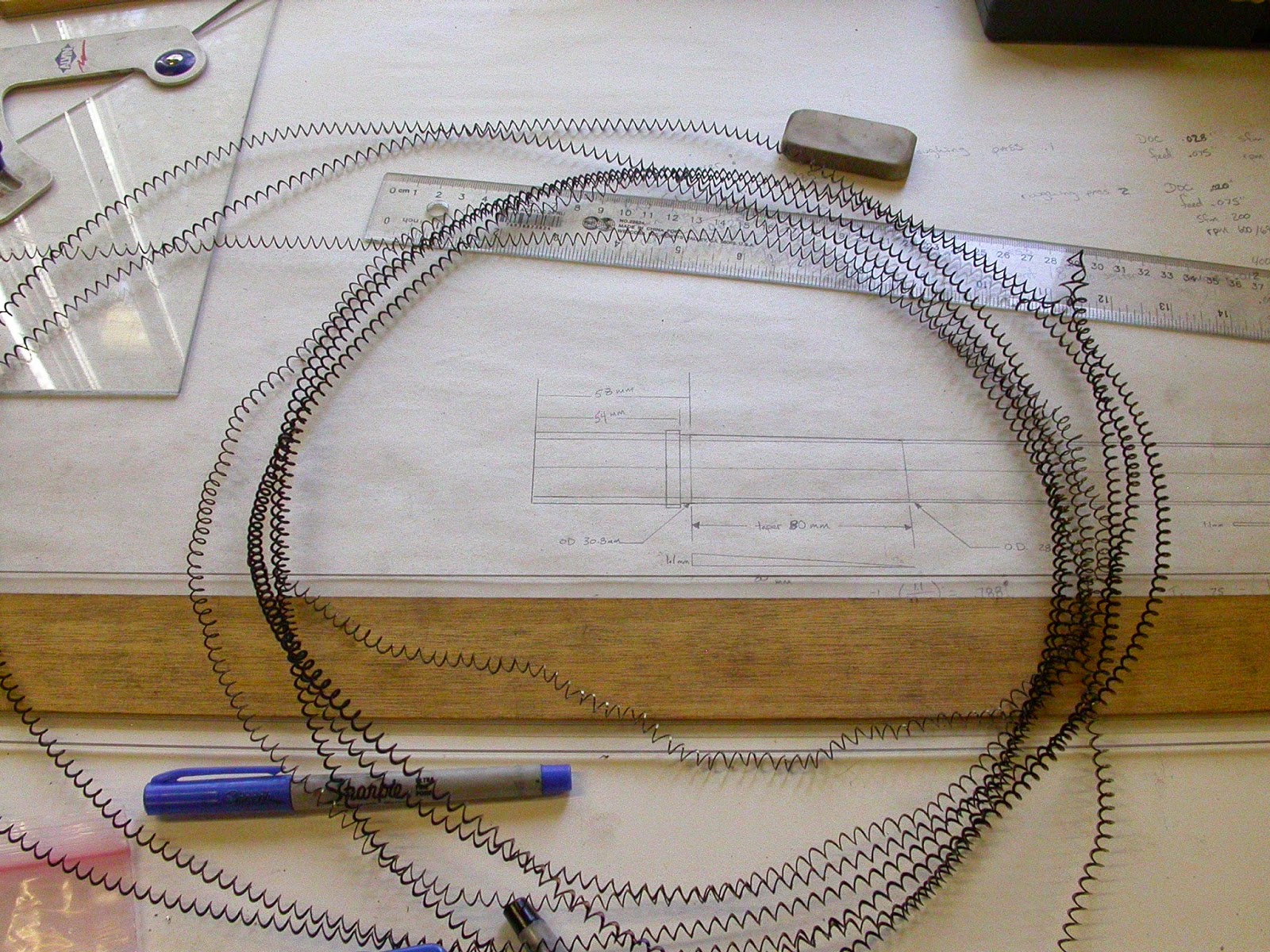 Starting with some 1.25" x .125 wall 4130 cromoly, I set about designing the steerer tube from the bottom up, giving ample room for blade and crown race seat attachment.  I carried the taper 80mm into the steerer and some trig starting with the O.D. of the crown race seat area and subtracting the stem clamp diameter gave me a change in radius of 1.1mm and a taper angle of around 0.75 degrees.  Click to photos to full screen.  Calculations at this point are more accurate than my tooling can read so I rounded up the math (I'm talking math into minutes and seconds here versus a machinist's protractor that reads 5 minute intervals).

With the design laid out onto the tube I setup the lathe.  Now I have not spent much time with 4130 on the lathe.  My first cuts were looking pretty terrible with lots of galling and I was getting discouraged when the phone rang with a call from my buddy Evan at Idyllic Cycleworks.  Evan owns Moustache number 4 and has since found himself getting increasingly involved in a bicycle oriented machine shop in Fort Collins, CO.  He was able to give me some pointers that started with some new indexible tooling and inserts that allowed for deeper cuts at a higher speed.  4130 is rather counterintuitive when machining.  All the metals have their quirks though as I'm finding out.  With these pointers and a new bit I started making some practice cuts.  Turn it UP! 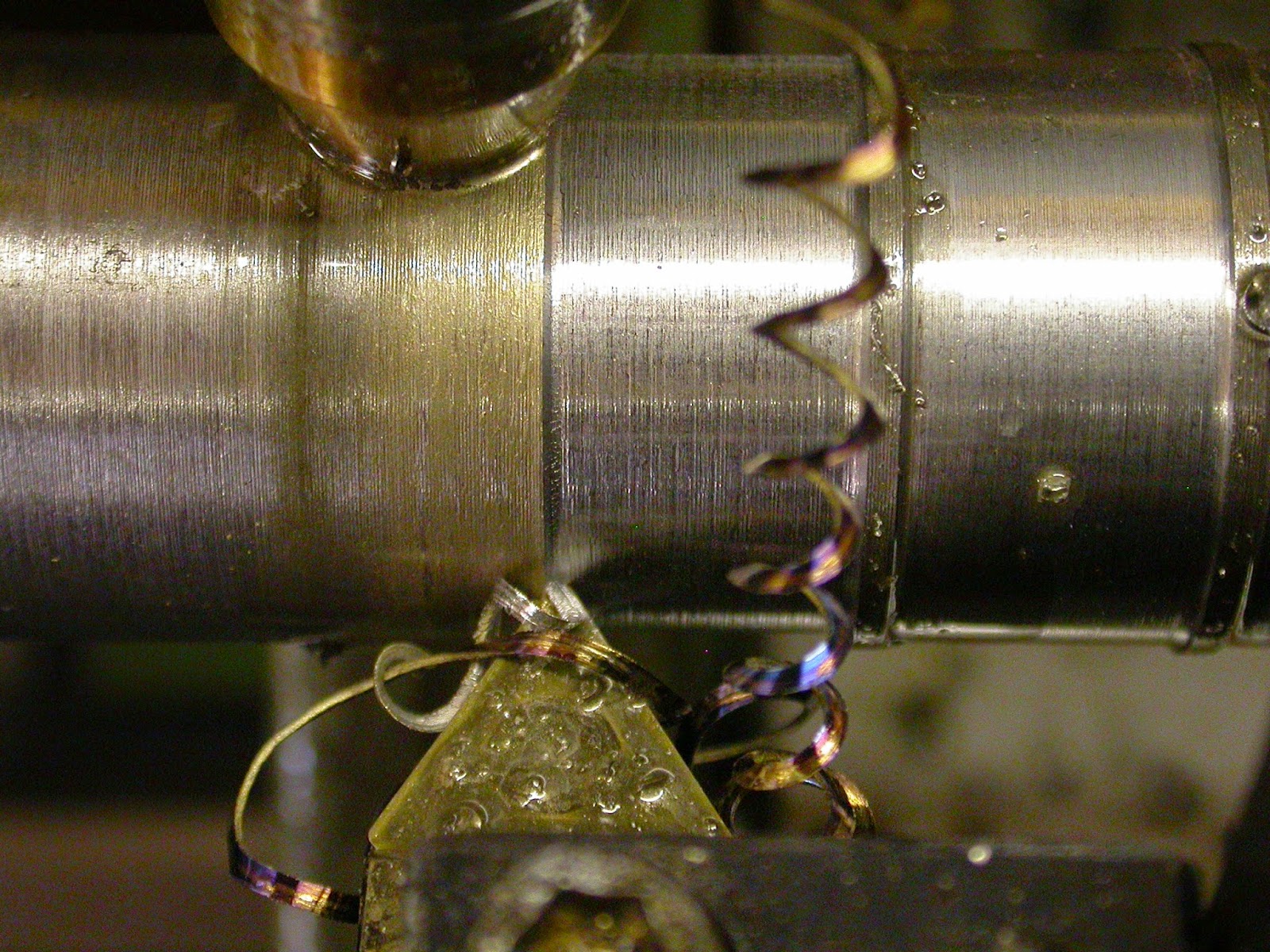 The roughing cut above already improved upon my initial efforts by leaps and bounds. 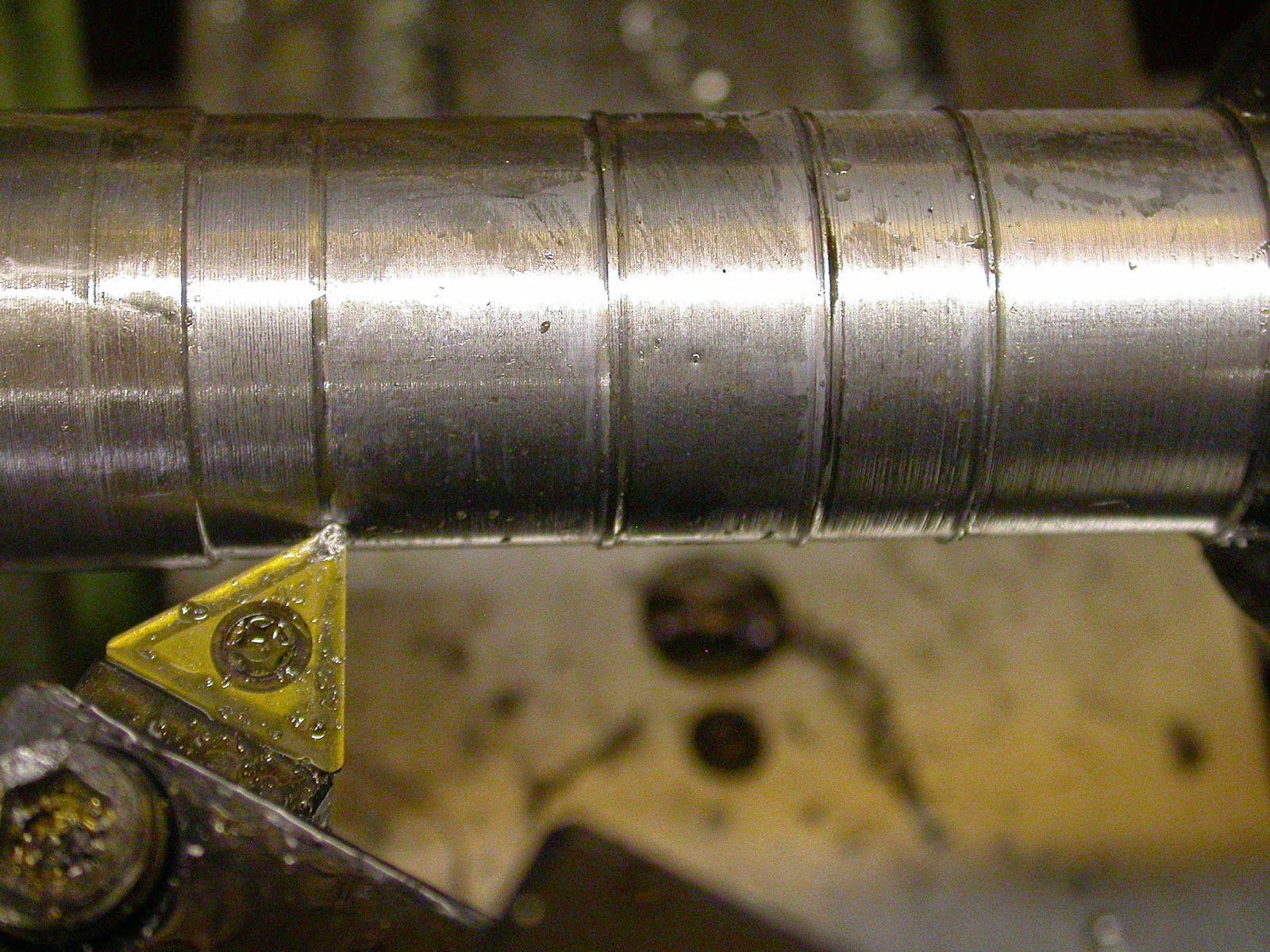 Messing around with tip angle for finishing cuts.  Above are samples trying out different feeds rates and RPMs


The results were immediately better, but presented me with the learning machiner's problem of needing to take a thick cut for a finishing pass to get an accurate diameter of 28.6 mm for the stem clamp.  I went about the process in a more planned manner than I have to date:  Two roughing passes of 0.028", then a finishing pass to take off the measured remainder accounting for tool deflection. 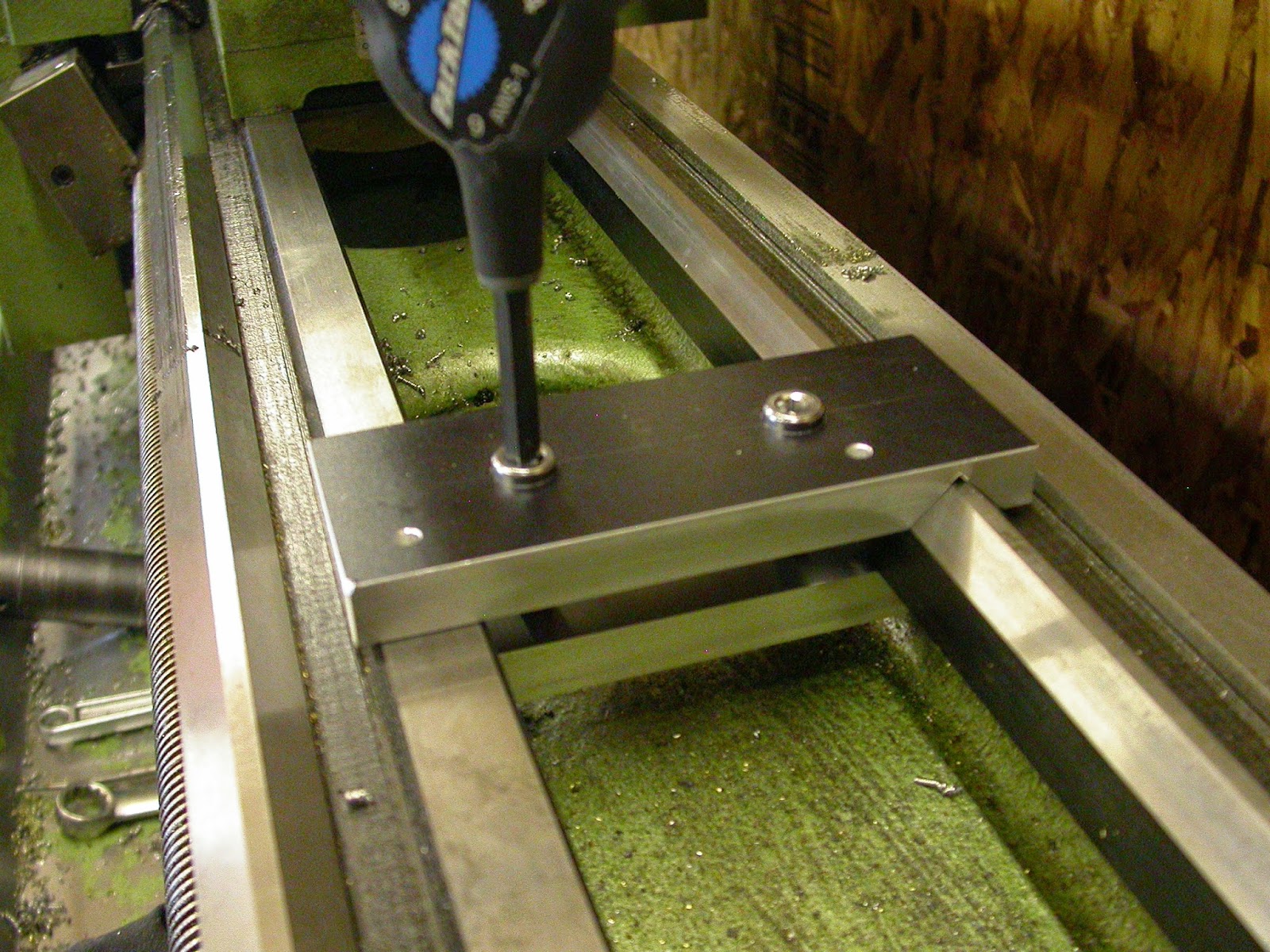 Now with a plan on paper, the next hurdle was the taper transition.  My lathe does not have a taper attachment allowing the turning of a taper under power feed, so the taper would have to be done using the compound slide under manual feed.  This meant a smooth transition from power feed to manual feed would be imperative.  This lathe will stop itself with the power feed on if an obstruction is met, so I made up a carriage stop.  By placing this in front of the carriage where the tool bit met the start of the taper I could manually engage the compound feed without stopping.  Stopping even for a second would produce a groove in the work piece that would be a direct trip to the recycling bin.  There is certainly room for improvement on this method by milling out a taper template for the cross slide to follow under power, but that's another project for another day.  In the meantime I managed to produce three usable steerers and one decorative piece of practice metal, and also some seriously long pieces of blued out phone cord lathe chip.  The blued out coil was a happy cut in chromoly, and you still can't fake a chip. 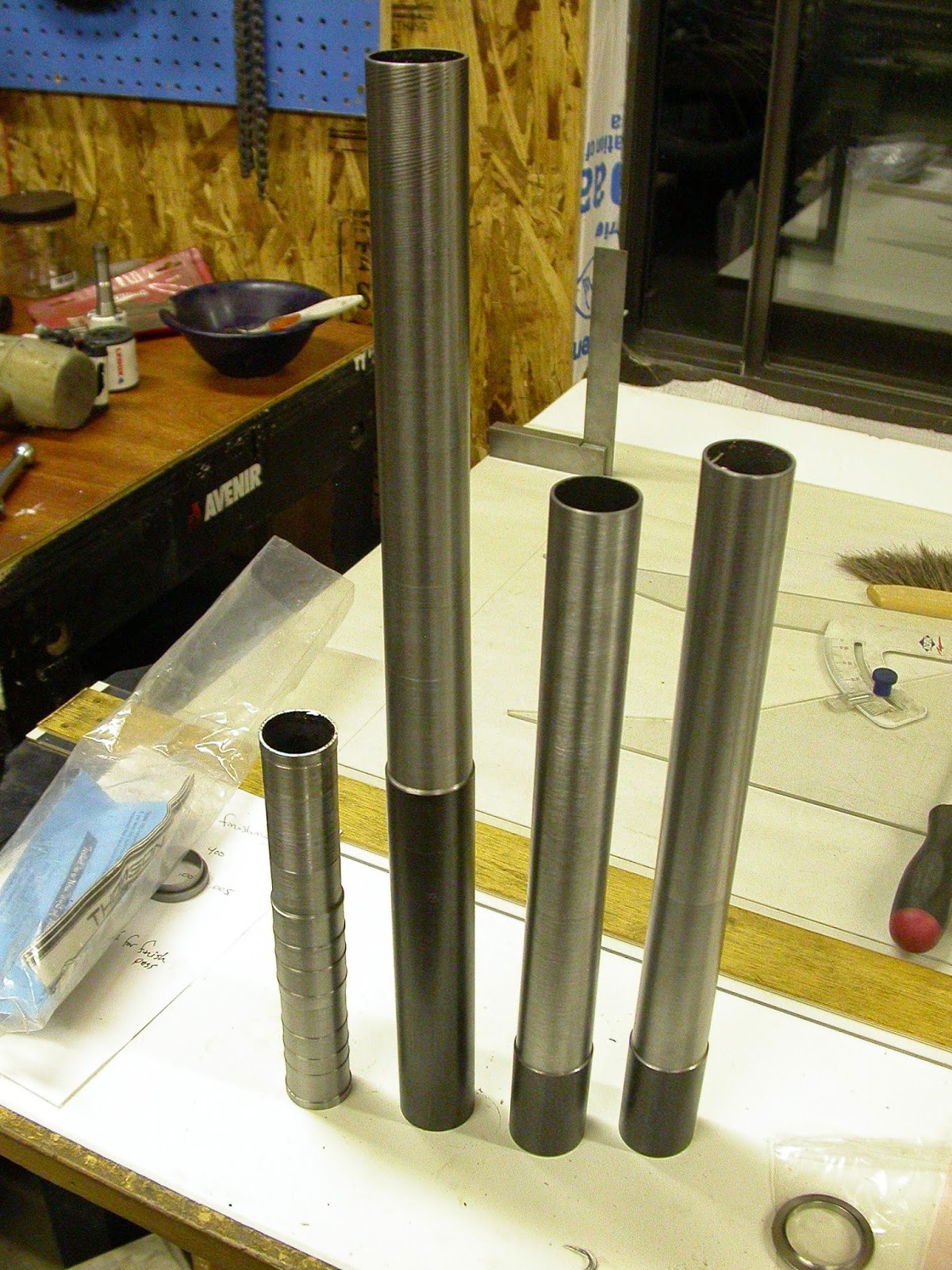 Thanks for following along in the geek text!