State of the Shop: A Clear and Dusty Day In June

As I wrap up my thirty-fifth lap around the sun I thought I might give you all an update of the goings on here at the Moustache Shop.  There has been and is still a fair bit of prototyping going on at the moment, and there is a lot going on that I am excited about and hope to be working out in the coming year. 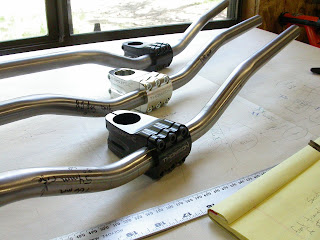 Handlebars:  This is something I continue to pursure rigorously, as I believe a custom handlebar is of great complement to the fit, function, and comfort of a custom bicycle.  It places the riders hands in a position of comfort for the long haul and allows for so much in the design that just can't be achieved with off the shelf parts.  They are a highly personal item as any one's individual preference of hand and wrist position can vary wildly from the next person's.  The compound bending operation is moving along swimmingly, and riser bars are taking over my work space.  With a greater understanding of the process every bar the end goal is in sight.  The end goal being custom riser bars precision bent to order at widths, rises, and sweeps, to be user determined.  For the foreseeable future these will be a 22.2mm offering with shims to 25.4 mm or 31.8 mm.  I aim to create a new bending unit to improve on the quality of the current offering.  Presently the bars are straight as measured on the surface plate, the bends are even and symmetrical.  Not bad for a small hand operated tubing bender.  I am looking to expand my materials offering with these into a complete item that needs no further finish.  The biggest drawback to a chromoly handlebar from my point of view is the need for finish to prevent rusting.  This makes adding handlebar components a bit more difficult, but complements a finished bicycle nicely.  It is my hope to be offering these bars in titanium by the year's end, but feel the offering should represent a finished, branded product. 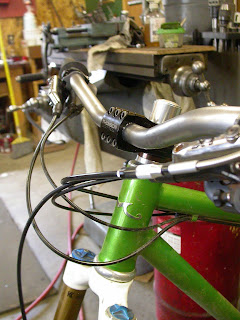 Bicycles:  Well here's some bad news.  My main tubing supplier, True Temper, has decided to close its bicycle tubing division.  This is unfortunate because the big tubes I've been using to make these Flagstaff Special Arizona hardtails are not offered anywhere else, and the metallurgy used in making these tubes was absolutely top notch.  Other options are being explored as to how to fill the void within the frame building community.  I'm hopeful that the void can be filled with a domestic manufacturer, but more hopeful that the advancements in steel made by True Temper are not lost to the sands of time.  I have a small stash to be rationed appropriately.  The biggest effects of this loss will no doubt be felt by their distributor, Henry James Bicycles, and the BMX segment.

With all the industry "progress" and change in axle, wheel, tire, and bottom bracket formats, choosing appropriate frame components has become increasingly challenging.  As a small operation it is difficult to filter and stay on top of advancements, especially considering the clout of hype surrounding any new release.  I aim to be in this for the long haul, even if my output volume is low, so that means carefully screening options as they come available.  I am rarely an early adopter of anything, and tend to favor the products that have been proven in the long haul.  Some of these new comings make sense, and most are in fact aimed at a solution of some sort, problem is that with technology of any sort there is less consensus of how-to-solve and the (in)compatibilities within the solution.  This can mean pricey investments in new tooling for a one-man operation, for a "we'll see" component offering.  Sony Beta comes to mind here.  For me it becomes a matter of "stay the course" and build directly to the rider's needs, not the manufacturer offerings.  Hopefully, under the careful eye, this is evident in all my work to date, and into the future.  Your bike should outlast the current fad of offerings and be useful and relevant into the future.  Bikes last a long time, fads do not. 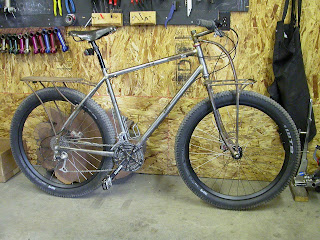 I've been working through a build with 650Bx3.0" tires and in understanding the perks of "plus" (seriously folks, can we abandon this term?) find it useful to view the new wheels and tires in a familiar context.  I dusted off the ol' Rust Bucket and got some test laps in on the new wheelset.  The project goal when finished is a flex-tuned rigid bike capable of any trail in Flagstaff.  Its a tall order, but the complete bike functioning with the user in mind (in this case me) trending numbers just won't do.  It'll be an interesting product.

Roadies:  Myself and the lady are becoming roadies.  Kristin signed us up for the Logan to Jackson 200-mile bike race; its sort of her family legacy.  LOTOJA.  For me this is digging up a part of my soul that's been buried since moving west.  I used to really like riding road bikes (I was even a shave-leg), but looking at this web page makes me think that I'll be finding myself in the company of cycl-ISTS that I prefer to mock in the "Yean, I'm an asshole from Flagstaff" manner (I'm sure there are plenty of nice folks at this event, I'm just calling it as I see it--my rough and gruff in the face of intimidation, and, really, I find this ride intimidating).  I still like riding road bikes, it just happens that we have not many roads to ride a road bike on.  Well, we do, actually, they just happen to be dirt and strewn with jarring sharp rocky cobble. 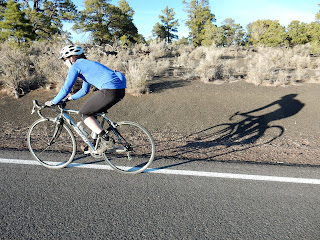 With all that fuss about plus, and now that we're roadies, one product I'm quite excited about is WTB's road plus.  I'm less excited about the name, but basically its a high volume tubeless road tire meant to tackle and hold up dirt.  The TCS bead has proven worthy in the worst of Arizona conditions, and is a go-to item for mountain bike wheelsets, so I'm excited to see their mixed surface offerings.  In that mention, Kristin and I will be training on dirt, since that's what we have.  Her bike is a road racer and very limiting in surface, so she'll be getting a new ground up dirt machine just as soon as I can whip that together.  I'm excited to try some new ideas on that one.  Expect that in the next month. 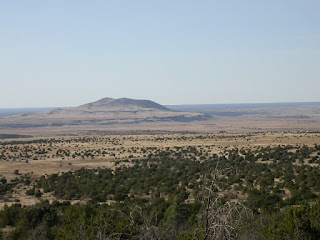 Re-visiting a past adventure:  Tomorrow morning I depart of the Arizona Trail heading north with the south rim of Grand Canyon as the destination.  I first completed this ride ten years ago nearly to the day as it was on my 25th birthday.  It was my first overnight bike adventure (actually it a two overnight adventure, the second night being somewhat unplanned.  Cosmic Ray's Fat Tire Tales and Trails guide said the 75 or 80 miles would take 12 hours, so I rightly figured I was good to do it in 6.  I had purchased a rear rack for my single speed Surly Crosscheck and strapped my gear on with a rope.  First tour.  I got a prompt start at high noon on A Clear and Dusty Day in June with the 7000 ft. sun barreling down on my back.  Wow, Arizona, land of rude awakenings.  I had run out of water before the sun had set, and despite bringing a filter, had not encountered any water on the route...that's funny.

Luckily a group of Boy Scouts had camped at Cedar Ranch, the of three stops along the route that used to be the Stage Coach route bringing the first tourists from Flagstaff to the Grand Canyon.  The troop leaders topped my water, marveled at my horrific setup, told the boys they were chumps for being so whiny when there was this guy with duffel bag on a road bike riding farther than they were, and sent me my way.  I, however, was more than a little embarassed, considering myself an accomplished outdoors-man and cycler who had survived the Montana wilderness for the last two years....and to be saved by, of all walks of man or woman.....the boy scouts.  Not good.  But Grateful nonetheless. 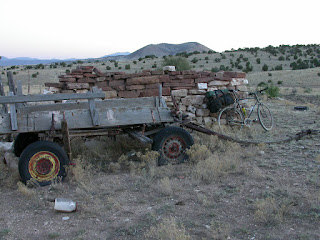 I pressed on into the evening hours through the ranch bottoms and came across Tubs Ranch, some rotten board construction I quickly realized was infested with pack rats.  I decided to sleep outside.  I was pushing my bike as I inspected the grounds, and apparently some tumble-weed plants thought I was trying to steal their hard-earned water and gifted me with goat-head thorn seeds all about my tires.  Being one who had at that time not embraced sealant I awoke to find both tires flat.  No big deal, I'm prepared for this.  I changed my tubes and de-thorned the treads and started pumping.  At about 5 psi it got to where the tires weren't getting any more air.  I tried to ride this and headed off in the wrong direction (Cosmic Ray said [read] "bring a compass take the route most north!"--I thought "who ever needed a compass?").  I quickly turned back for Tubs after my tires were soon, again, completely flat.  That's funny.

Luckily a group of Boy Scouts would be along in an hour or two.  Maybe I could get some help from them.  They stopped in the shade of the one Juniper tree and took their lunch.  They pumped my tires and one of their leaders gave me a new mini-pump.  I asked if I could mail it back to him and he said, "just keep it."  How embarrassing.  They topped me up on water again, as I had drank off the entirety of my night's ration, and again they sent me on my way. 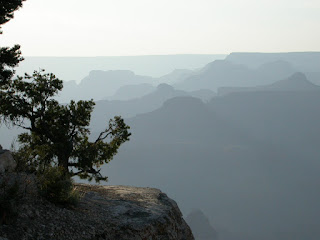 I arrived at the canyon promptly in the late afternoon with the sun beating down from above, famished, but exhilarated from the sight.  I turned west on the Grand Canyon tourist road route 64 and stopped at every tour bus pull out before making my way to Grand Canyon Village where I spent the rest of my time in the park stuffing my face in front of the grocery store.  Tourism at its finest.  After the break I pointed my bike south down Highway 180, a dismally scary road to ride, though beautiful, camped the night, and completed the return trip with a proper AZ morning start. 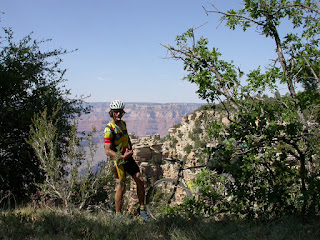 The trip next week will be more on pace with that trip of the Boy Scouts, but I'm reminded of my effort ten years ago and feel my steed should be reminiscent of the Surly.  So I'm taking the super commuter.  Fun-hater style.  I haven't decided to go single speed yet, but who knows.  We're taking four days to ride to the canyon, and the trip is for the Arizona Trail's Seeds of Stewardship program, for which I have worked the past few years.  We have 8 high-school students doing the trip, some have completed last year, others will be for the first time.  I sure hope they can pick up for what will no doubt be my baggage on the group.  Report to follow. 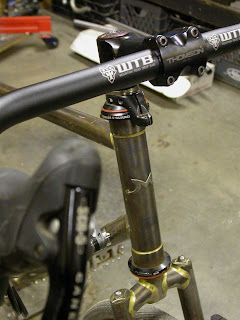 Posted by Richardo at 12:07 No comments: