Lost In The Mix

I managed to finish up the Heinchez 650B bike.  Scott picked the build kit and he know's what he's doing.  King bearings all about, XT/XTR drivetrain, Avid BB7s, Paul levers.  He's been riding the piss out of this thing and has almost worn out the back tire already.  The chainstays are shorter than most 26" bikes and the rear wheel backs out of the frame without having to remove the caliper.  Check out the bulges on the seat tube and the custom bent seat stays.  Word so far is that its super stable and if the Heinchez were forced to evacuate due to fire and was only allowed to take one bike (Heinchez has a fine collection including an old Fat Chance road bike with a Mavic kit, a Rock Lobster, a Geoffrey Butler with friction Super Record, and a few other unmentionables), it'd be his Moustache Ride.  Hell Yeah! 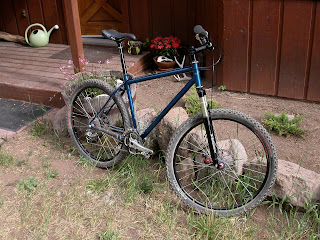 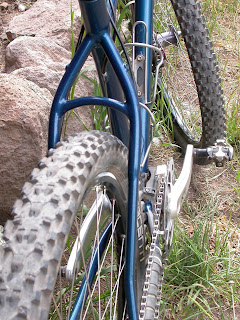 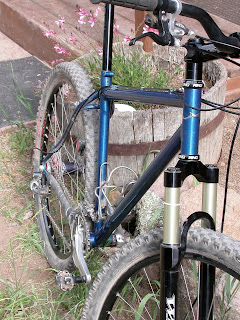 As you may have guessed I am in the full swing of summer work fighting fire with the Mormon Lake Hotshots here in Flagstaff.   We've now had a total of four days off since May 25th of something like that.  So the paychecks are good but, man, am I worked.  We typically go out for a maximum of two weeks but this last trip we were hurried off the Tecolote Fire in New Mexico when word broke that a fire popped and was threatening homes in Flagstaff.  We were sent home with the thinking that the crew might need to evacuate our homes, but we all knew we couldn't return home to take days off when our back yard is burning down, so we extended our tour for a week.  Many of our crew has been fixed here for years, while some come only for the fire season and have no real ties to the forest.  Either way, I knew that this fire would be different than the others.  We travelled to Albuquerque that night and I spoke to some friends in town and the mood there was just eerie.  The forest we live in is dominated by San Francisco Mountain (Kinlani to the Hopi).   The center of ancient trade routes and the ground that bonds a community of avid climbers, mountain bikers, hikers, runners, and equestrians is now engulfed in flames under a huge billowing plume of smoke spanning the gray scale from white to black.   People in town were freaked out, scared, somber, sad, a full range of emotions comparable only to that of the color spectrum in the smoke column.  We rolled into fire camp on the east side of town just after noon after watching the column close in from a distance in its second day of burning.  It was the heat of the day and fire activity was picking up.  I was speechless, and I have never seen of felt such concern for any piece of ground on which we've worked such as this one.  This feeling was echoed throughout the crew.  It would all have to be put aside for the job ahead.


We were put to work griding for spot fires out ahead of the main fire in the last stand of forest between the fire and the structures of a community east of town.  The line I walked back and forth for hours paralleled a trail I would ride to my friend Isaac's house in that community.  Fortunately that stand had burned back in the nineties and offered little for fire to get established.   Our day came to a close without any direct excitement, and for once I was relieved about that.  In a job where you live for excitement to relieve you of boredom, today I preferred  boredom.  We were allowed to go home that night and it wasn't until the stories start coming from the townspeople that you realize the urgency of the situation.  Town felt like a war had broken out in the middle of it with a faceless enemy, but its people stood united together.  It was the buzz everywhere you went, and still is. 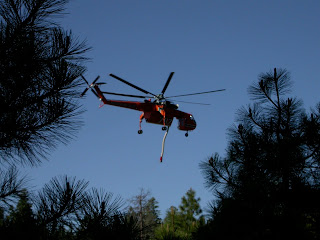 With the fire in check where the houses were threatened, our second and remaining days brought a new assignment.  Prepare and indirect (away from the fire's burning edge) control line up Shultz peak to keep the fire in check on the wilderness flank, and keep it from progressing further onto the San Francisco Peaks.   The line was cleared and prepped to burn in a day and a half with the work of three hotshot crews, but before we could burn we had to handle a  slop over that threatened the security of our mission.  Fire had started backing down the ridge between Shultz mountain and Doyle peak (the eastern most of the San Francisco peaks).   It would take the rest of the day to secure it.   The burnout operation down Shultz mountain would begin in the morning when conditions were dry enough to ensure a good burn (full consumption of ground fuels for no possibility of reburn).  It commenced around noon.   One of the other crews started burning and were about to hand it off to us when the winds shifted causing the main fire to the east of us to make an impressive crown run up the mountain pulling in with it the back burn from the other crew.  We waited it out at the safety zone at the top of the mountain, but felt the heat from 150 foot flames at a distance that tickled some nerves. 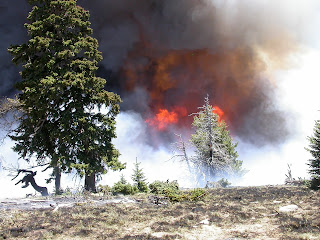 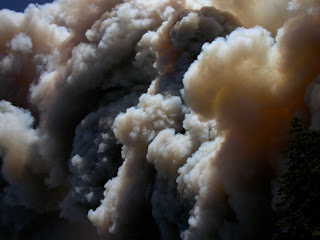 As soon as the run was over we all knew the mission, control spot fires.  We moved swiftly down the line and into battle past the other crew looking completely dazed.  We started picking up spot fires instantly and continued the rest of the day.  To complicate things the burn would have to be continued downhill torching out trees and sending more spots until the burnout was completed or else we could have been outflanked by the fire that sent the first crown run.  Heavy helicopters were used to make water drops a thousand gallons at a time on the green side of our control line in hopes of mitigating any of the spot fires from getting established in the fuel beneath us on the opposite side of the ridge.  Between running the burn out, holding the line, directing the helicopters, griding for spots, and a respiratory ailment that was taking its toll on our crew, we were spread thin.  We called for reinforcements, realizing that we would not be able to complete the burn ourselves and hold it.  Three more hotshot crews came to our aid and eventually we passed our burn off to the next and them to the next.  As soon as we passed the torch the winds switched back to favorable and the burn continued until 1:30 in the morning.  We would spend the next two days controlling the edge which we had burned before finally being pulled from the fire for some much needed rest.  With the fire now more or less contained at 16000 acres, all the citizens of Flagstaff can do now is wait for their forest to be re-opened to go and explore and reminisce.
Posted by Richardo at 13:48 2 comments:

We celebrated bike to work week a couple weeks ago.  Its so nice to live in a town that puts on an event such as this and people actually support it by participating.  I was lucky enough to be able to ride everyday that week.  I try to ride whenever I can anyway but being on call for the forest service sometimes means hauling large amounts of laundry and showing up before dawn and my 45 minute ride just doesn't happen under those conditions.  The commutes this particular week were amazing though.  So many friendly smiling faces and hellos.  There were also events and fun rides to mark the occasion, most notably the tweed ride and bike to breakfast day.  The tweed ride was just as it sounds.  Show up to Mia's Lounge dressed in your finest wool attire, drink some whiskey, socialize, and then pedal around.  We pulled up in front of Zach's house where he sped ahead and readied a bottle of scotch.  Those informed on our whereabouts wheeled into the yard and took a pull.  The ice cream truck at Thorpe park forced another stop.  And this sort of behavior continued until the sun went down.  A fine evening.  Thursday morning was bike to breakfast day.  I managed some coffee and some coffee cake and fruit, but I guess I missed the real gems of the morning by leaving too late and opting for my usual breakfast burrito and its load of calories.  I did however find myself in some interesting conversations outside of the breakfast stops.  Something about bikes and free food puts people in really good moods.  This should happen more often, the biking to work that is...for the masses anyway...the free breakfasts and coffee too.
Posted by Richardo at 17:22 1 comment: