So here we are into September and I think my bicycle output up until now would qualify as a personal "least productive" year to date.  That said I'm still here making stuff and plenty of that work is still bike oriented.  A lot of those efforts have been going across city limits to the other custom bike shop.  This year has been a year more consumed by tool building, and the payoff will be worth the effort both in the time saved over the long haul and more so in the overall quality of the finished frames.  There's only so much you can do with hand files, folks, and the argument here is not man vs. machine: which method is better.  The hand files still get touched to every piece of metal that makes its way onto the bike, but you just can't manipulate metal with files.

I've resorted to various forms of plate yokes on at least a few different bikes now, and with the dawn of the plus platforms becoming increasingly bright, the need to accommodate sound structure in an area with minimal space is ever present.  I needed a way to accurately persuade plate metal in a symmetrical fashion that would allow for maximal tire and drivetrain clearance.  I kept looking at this piece of railroad track we had sliced off its base a few months ago out at the Viking Ranch.  When it comes to industrial scale metal work the Viking Ranch is way more capable than the Moustache Shop.  His drop saw accurately sliced the mushroom top of the track off effortlessly.  Now to put it to use.  The first step in manipulating metal is work holding.  The track was drilled and tapped on the face and on the side and a clamp was made to hold a 3/16" plate at tight clearance so minimal flex is transmitted through the clamp.  The face clamp is used for the primary bends that need to be symmetrical and the side clamp will be for the secondary bends farther back toward the rear axle. 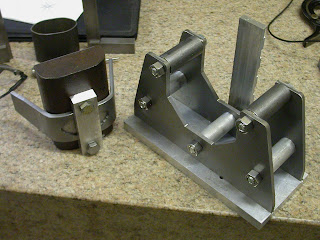 Now to apply the force.  Keeping the pressure as close to the bend radius as possible will assure the metal being bent follows true to the form, but I did want the ability to change to 1/4" plate if the need presented itself and allowing for a little leverage off the track sides seemed like it would save my vise, so I kept the rollers a bit outside the width of the track.  The single leg attachment on the bottom of the female "crush lever" assembly is to orient the clamped work piece.  Above the primary bends have already been applied to the machined raw plate.  Below the secondary bends have been added with a more basic lever assembly and a reposition of my work piece clamped in the form. 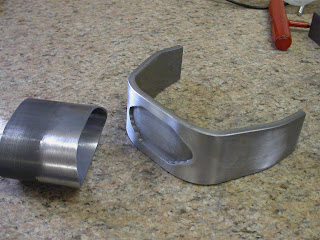 Before being bent the flat 3/16" plate is cut to something of a diamond shape and the center is relieved to a thickness of .100" on the inside where it will be attached to an extension from the bottom bracket shell. 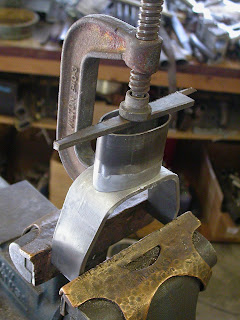 The yoke and extension are then brazed together and proper inside penetration of the brass is ensured. 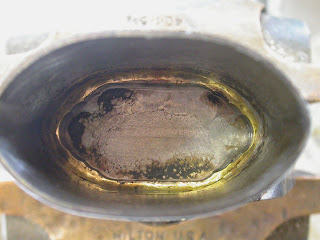 The sub assembly is then mitered to the correct length for tire and chainring clearance and tacked to the BB/seat tube sub assembly. 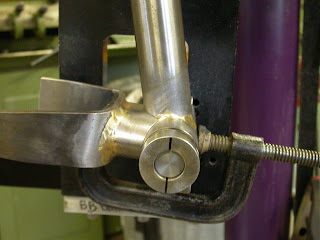 Stays are now ready to be mitered and attached.  I picked up some slotting saws at a machine shop closing in Phoenix and got the slotting arbor on the Barker PMO mill attached and running for the first time.  Makes a crisp cut. 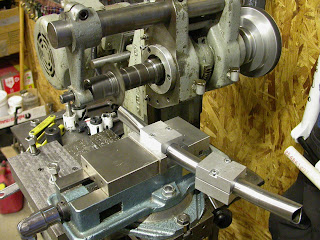 For such a small mill I have been really impressed with what it can do as a versatile bike machine.  So far I've done just about every miter on a frame and fork with the exception of seat stays, and all with a very basic swivel vise and a cabinet full of Paragon tubing blocks.  Clearance is tight, and setup is probably not the fastest out there, but the miters are accurate and its been a fun transition. 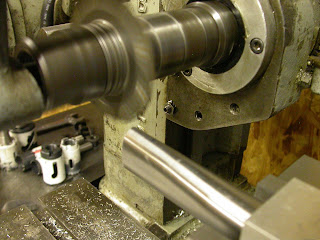 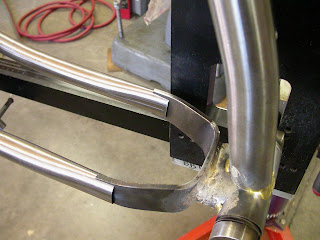 Stays are mitered and tacked first at the dropouts then at the yoke.  Now awaiting the rest of the bike.  It'll be a sweet one, I promise!

Posted by Richardo at 14:25 No comments: