Shop Happenings and Some Press

Here's a little glimpse of things going on around here these past couple weeks.  The lineage of bends leading up to the one on the left were all produced on a bender made in house.  Its a massive piece of metal that I just keep drilling and polishing and adding more on and moron to make its products all the nicer.  I've been working on this project for waay longer than I'd like to admit but sometimes projects get shelved in the name of acutally making something....like bikes.  It took eight attempts and a full 8 feet of thin wall practice metal to get to the point of even wanting to try bending an oversized unicrown blade.  The first bends were a success in that they are usable blades.  After some further modifiications the following attempts produced the desired results. 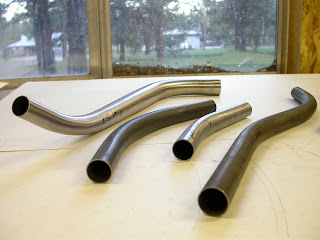 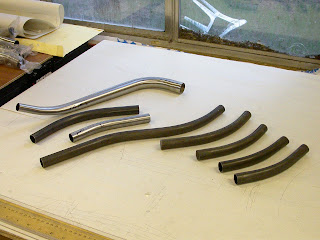 I've been on a handlebar kick of late too.  In addition to the straight bars that have made their way onto some of the recent bikes, I've been messing around with some brazed designs.  The bar below started as a mis-bent straight bar and ended up an eleven degree touring bar for use with the Thomson BMX stem.  This bar features multiple hand positions and some area to tie on gear and accessories.  Bars like this and other designs as well are available for purchase with a frame, painted to match or following whatever color scheme you may like. 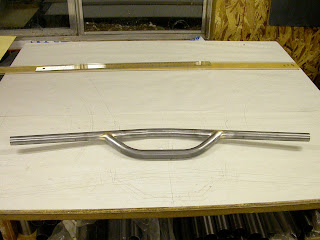 Lastly, my buddy Will over at WTB was kind enough to turn the spotlight my way and feature me on his summer blog series "Rad People Who Ride."  Pretty cool stuff going on over there, both at the blogspot and the company in general.  You can find the article HERE.  Thanks Will!  Enjoy y'all! 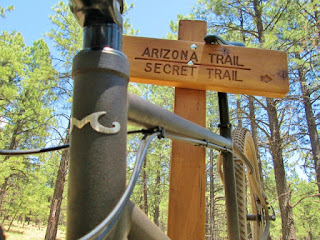 As with many of the bikes I build this one started as a concept to address the riders needs and then evolved quickly into a personality all its own.  This bike will no doubt spend much of its life along the Arizona Trail as its rider is the director of the AZT Association.  He's a charger and has broken plenty of bikes as a result.  Our conversation led me once again to how bikes (production ones anyway) aren't really built for Arizona and everyone underestimates how demanding the terrain is on bikes.  To this Mateo says "Yeah!, You don't bring a knife to a gun fight." 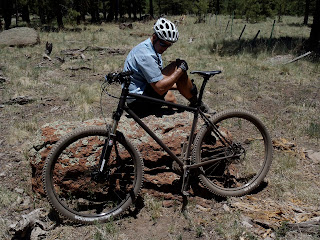 The color is equally worth mentioning.  Mateo described to me a color somewhere between coffee, porter, and chocolate.  A trip to the powder coaters turned up a color just acquired but never shot.....Dark Roast.  It was a go.  Its a textured matte brown with lighter brown flakes buried within, just like ground coffee.  Brown really is a great color for bikes folks.  It looks right at home under a layer of Flagstaff moon dust and I'm sure will be equally comfortable under mud or what ever other configuration of dirt you want to add.  Its also a pretty close match to patinated iron in the desert or even carsonite trail markers. 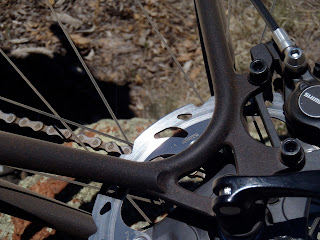 As always,  thank you Mateo for the cool project and enjoy your new bike!

Posted by Richardo at 08:33 No comments: 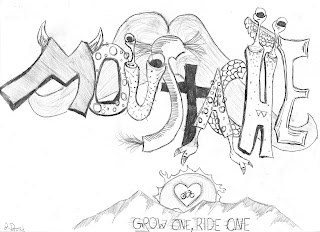 A huge thank you out to Mother Road Brewery and Flag Bike Revolution for the tremendously fun time y'all hosted last night at the NAFBE event.  Its always great to get rad bikes and delicious beer together in a surrounding allowing for engagements of those that we don't always get to see.  Much fun was had by all in attendance and Diamond Down String Band was kicking the tunes and sounding awesome.  I'm already looking forward to next year's event.

Thanks also to Jacc B the shop intern for the awesome piece of artwork above that provided the backdrop for my exhibit and congratulations on your First Friday debut.
Posted by Richardo at 17:39 No comments:

Hey there readers!  I'll have some of the recent shop makings downtown this Friday at the 2nd Annual Frame Builder's Expo.  It'll be at Mother Road Brewing and Flag Bike Revolution from 4-9.  Come by and say hi or ride your Moustache down and hang out with the local builders.  It would be cool to get a gaggle of the past work down there too.  Hope to see you there.... 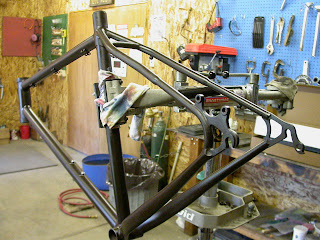 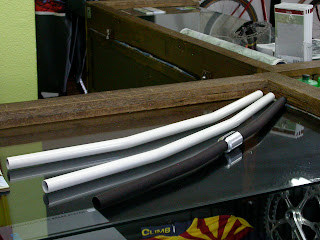 Posted by Richardo at 20:34 No comments: