...as in De-Evolution.  This concept was brought to at least a few willing listeners starting in the seventies as the band DEVO became known in the music world.  Those that saw beyond the satirical production of the live show that later became mostly spectacle by the time of MTV and "Whip It" could begin to understand that at the foundation of what came off as abrasive, communist, and down right ridiculous was the fact that, yeah, it was meant to.  Their view was that mankind, particularly in 1960s/1970s America had ceased to evolve and had instead begun to backtrack, to be herded by whatever they were told, hence the name.  People were sheep and had increasingly begun to lack the ability to think freely.  Most of the band's music played off this premise one way or another, and eventually the band went away citing that the world was just not ready for DEVO.  Maybe their disappearance in the late '80s after some less than well received albums gave the world time to process their message before their return to the production in 2010.  The world was deemed ready. 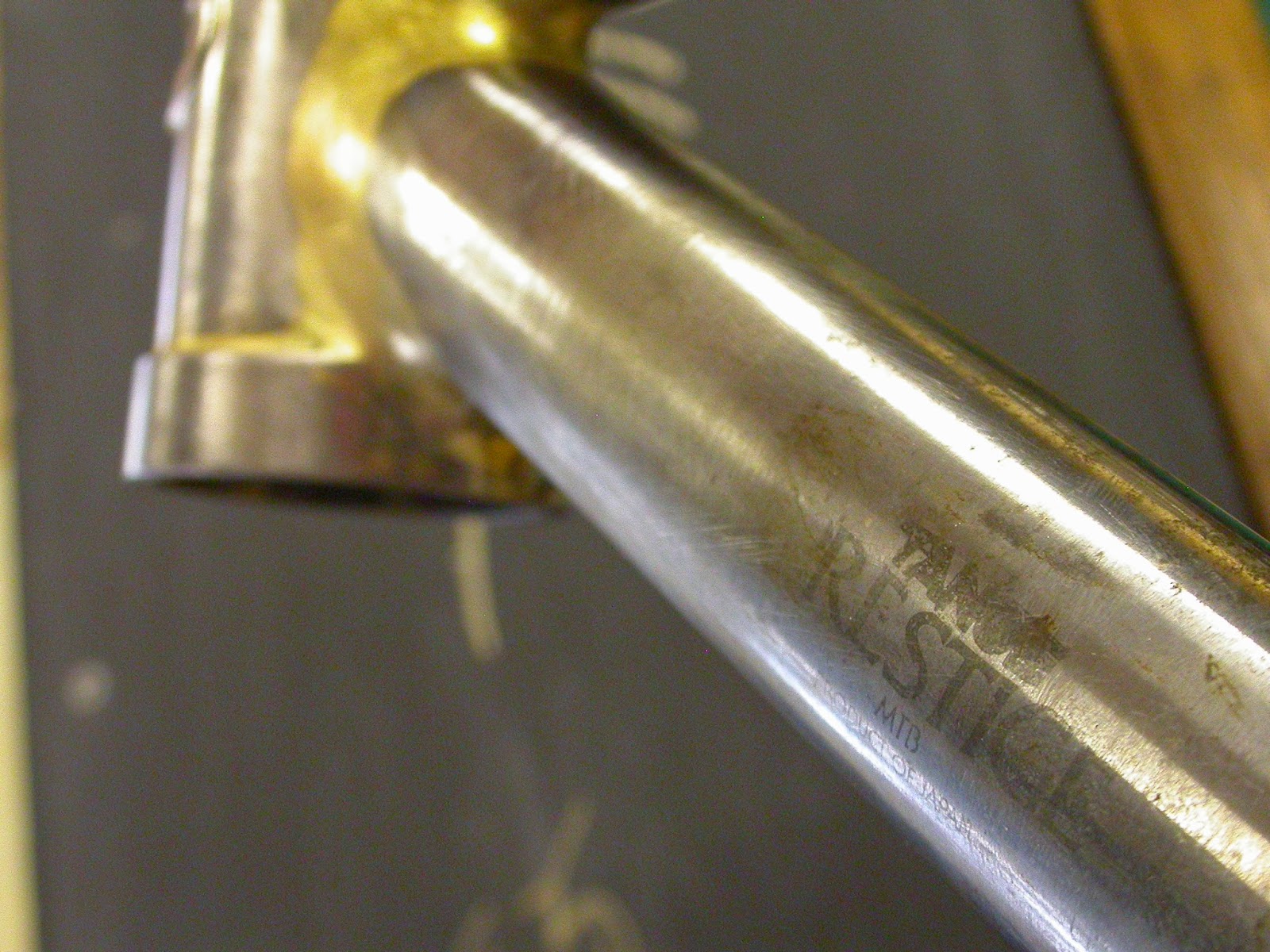 Really this isn't meant to be a history of my favorite band, but more to serve as a background to a parallel I would like to try and illustrate:  the sort of thing I think about when I'm doing this bike building.

This thought can best be summed up by a conversation I had with a friend this week asking the specifics of what is this bike he saw in my shop.....you know....what wheel size is it?

Note the placement of the ambiguous "THEY" and what connotations it may have.  Trek, Giant, others have all but abandoned 26" wheels entirely for 2014 and I'm sure its not hard to trace these decisions back to some notion or premise based in marketing or sales or capitalism that this is in essense "BICYCLE EVOLUTION".  Even Yeti has abandoned on what was as of 2013, their best selling bike of all time - the 26 inch wheeled SB-66. 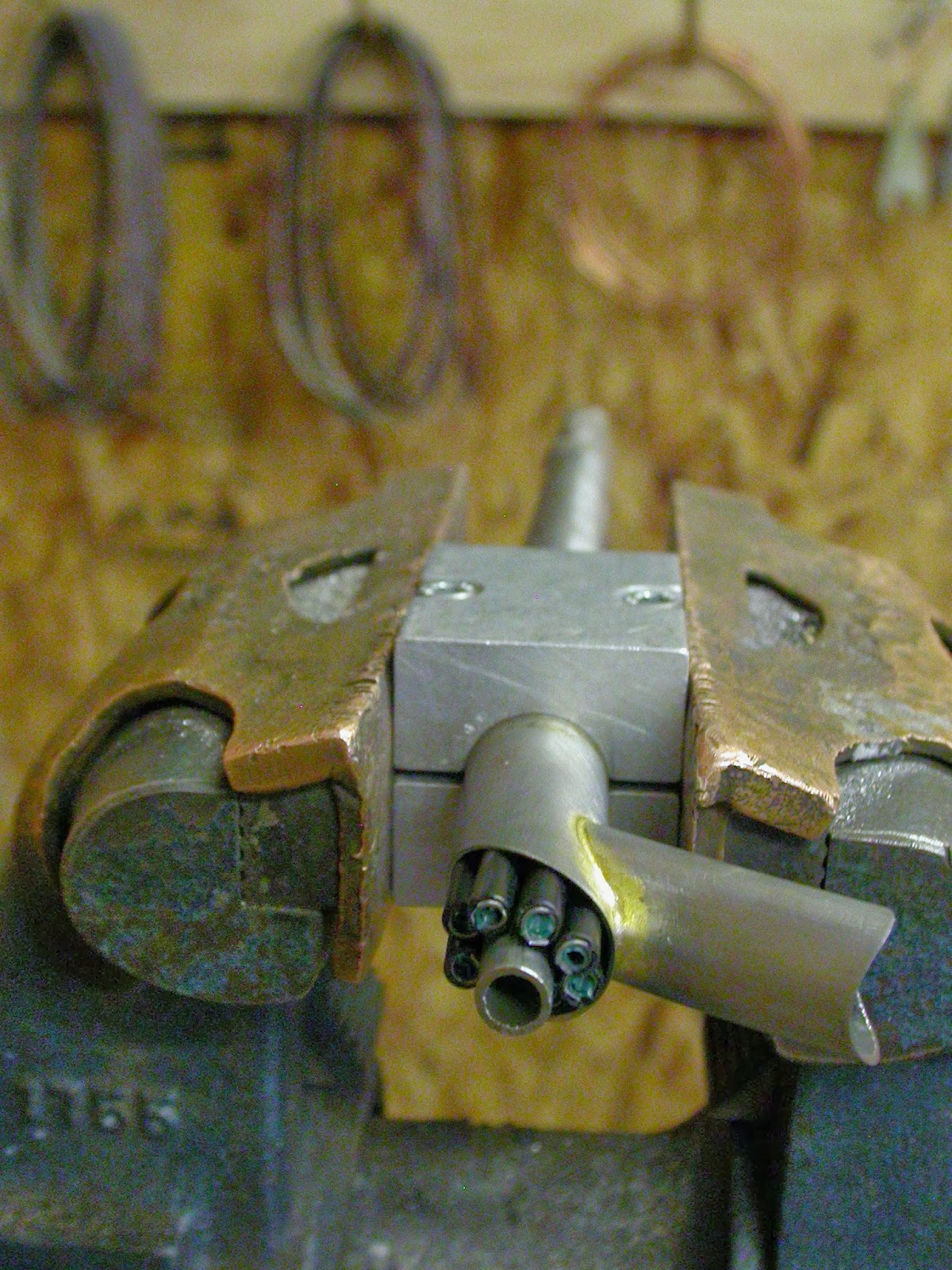 The unfortunate thing here is that these discontinuations are not based in offering a better bike to the consumer, they are based on selling more bikes based on fads and perceptions (or misconceptions) through marketing and through keeping up/competition.  And the backlash of this "evolution of the bicycle" will inevitably see certain parts options and standards becoming harder to find, just like that suspension fork with canti bosses.

However, the one who really loses here is the rider.  26" bikes fit smaller riders great.  They allow an active ride that is somewhat more advanced....and some people want to make the moves themselves instead of having a bike able to compensate.  They make a more playful bike than their big or even their mid wheeled brethren, and its how we got to be better riders in the first place.  AND, they're easy to accelerate as they have less rotational mass and carry less inertia.

Now I understand that someone wanting to get into mountain bikes may not want to deal with this learning curve of making the moves, and that's fine.  YOU have options (bikes with brains, i-Bikes, e-bikes), and YOU are probably finding my rant redundant by now anyway, but old riders need new bikes too and why should we have to be victims of "evolution."

Fortunately the people of Flagstaff tend to identify more with the Goat. 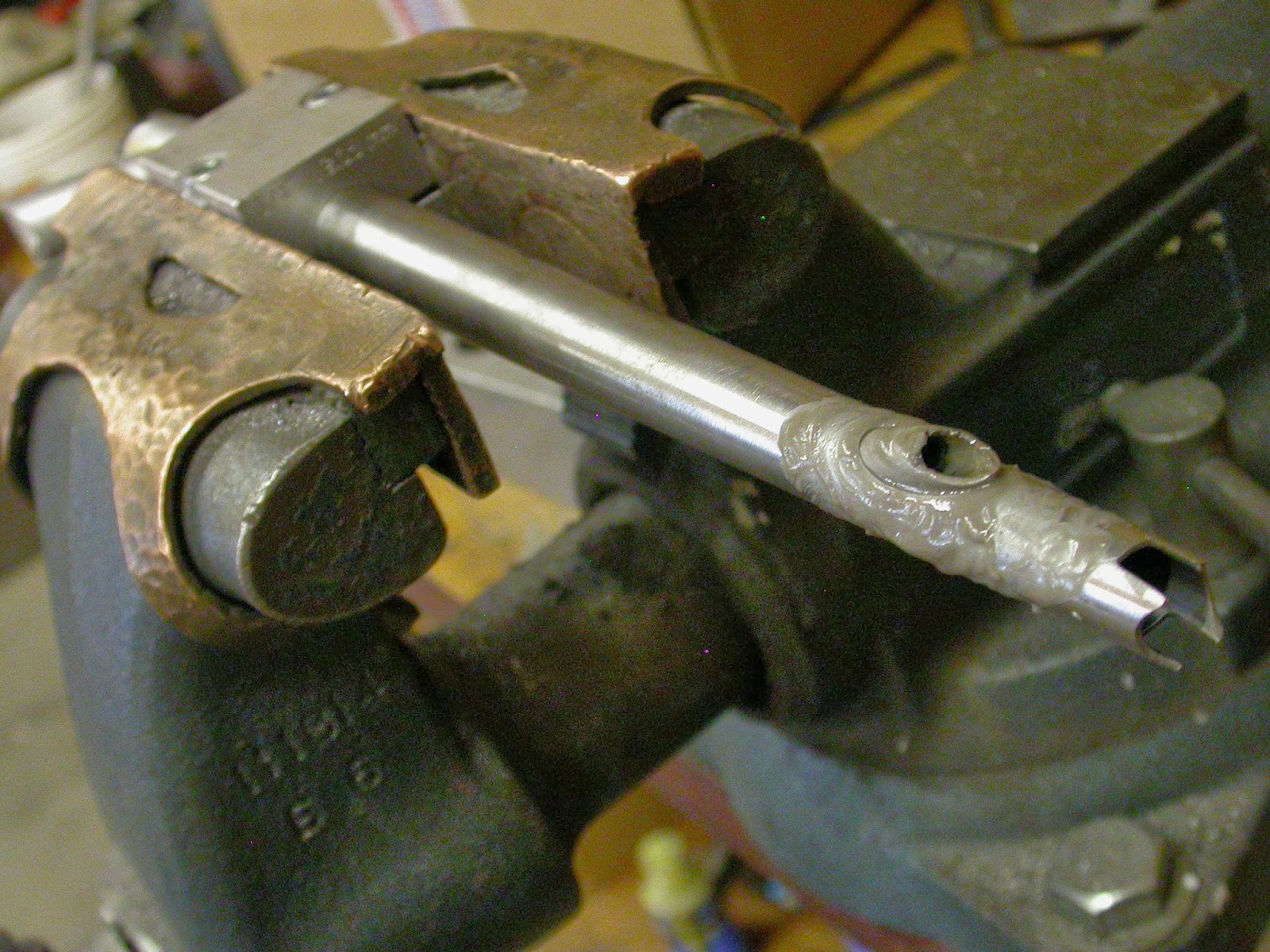 This project started from the concept of Shawna saying she wanted the DEVO bike.  And in that, I thought a Tyvek color scheme would likely be in order, but it really did fall into place.  A 120 mm Fox Float showed up following the early discussions that Shawna wanted an updated geometry similar to her Redline cruiser singlespeed.  I do love making Flagstaff bikes. 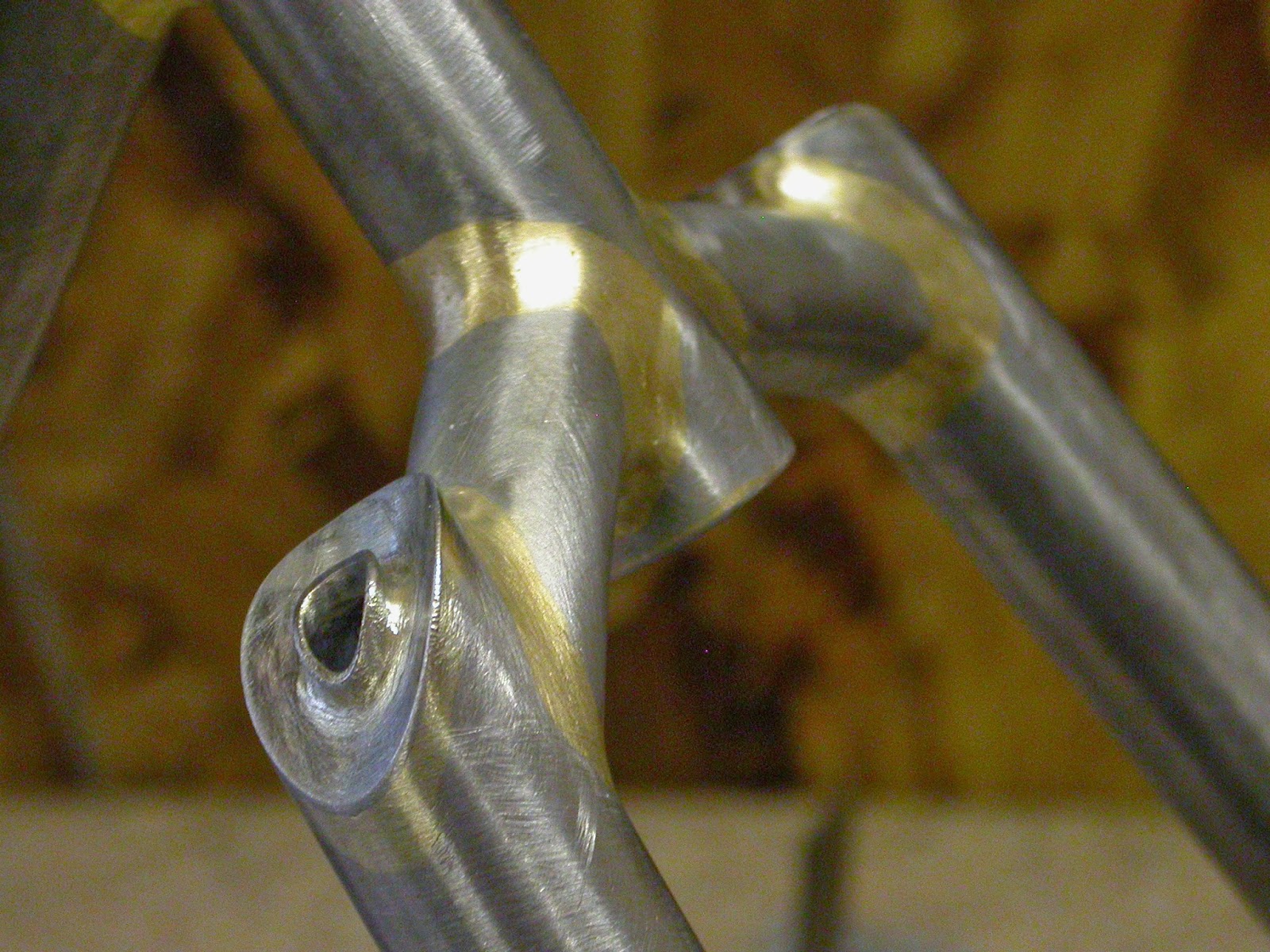 Making the DEVO bike to me meant keeping lines simple and angular, while meeting all the riders demands (2.5" tires, geared or single speed, rack mounts).  The rear mono stay runs the cables through the stay to keep it looking clean...simple on the surface, complexity through depth.  The tubes are a custom blend of NOS '90s Tange Prestige acquired from the devolved, 4130 aircraft, and True Temper stays mated to Paragon Sliders and the big head tube.  That head tube will make another argument for 26" wheels...its only 90 mm long and will not get much in the way of headset stack either....and I absolutely refuse to ever make a bike that looks like a Cannondale with the stem pointed down (yes, that's where "bicycle evolution" has you headed). The tubes fell into place based on what would fit to that head tube and provide the strength in application.  While not the biggest rider, its still a big-ish fork on the front that'll be slammed and levered down the rocky trails of Arizona at speeds yet unknown to its rider.  That old Prestige downtube is ovalized and tapered to provide a big external "butt" at the head, and represents the pinnacle of Japanese bicycle tubing.  Think Samurai.  I am fortunate to have been gifted some of it.  It is very clean on the inside, cuts nicely, and takes well to brass. 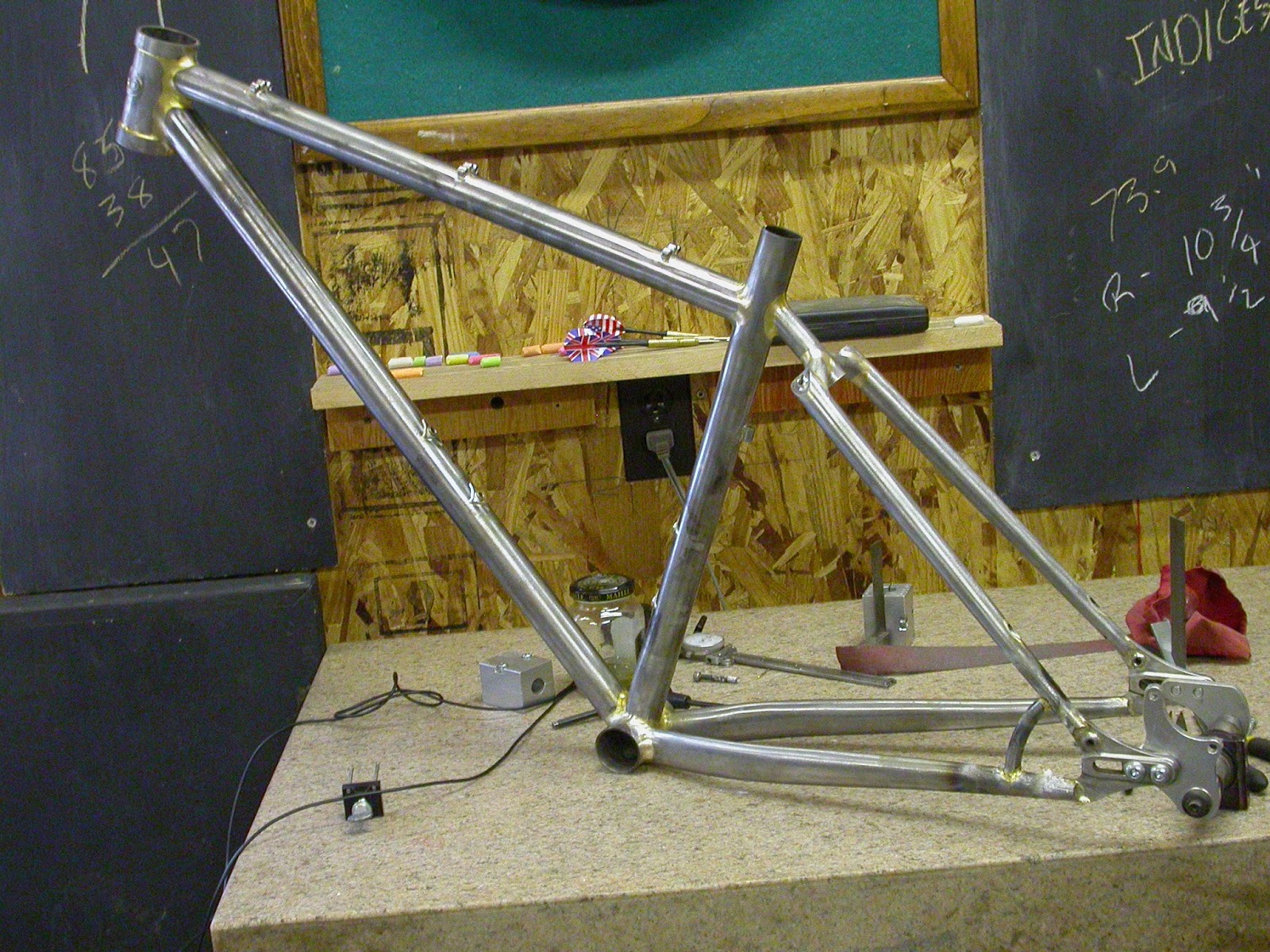 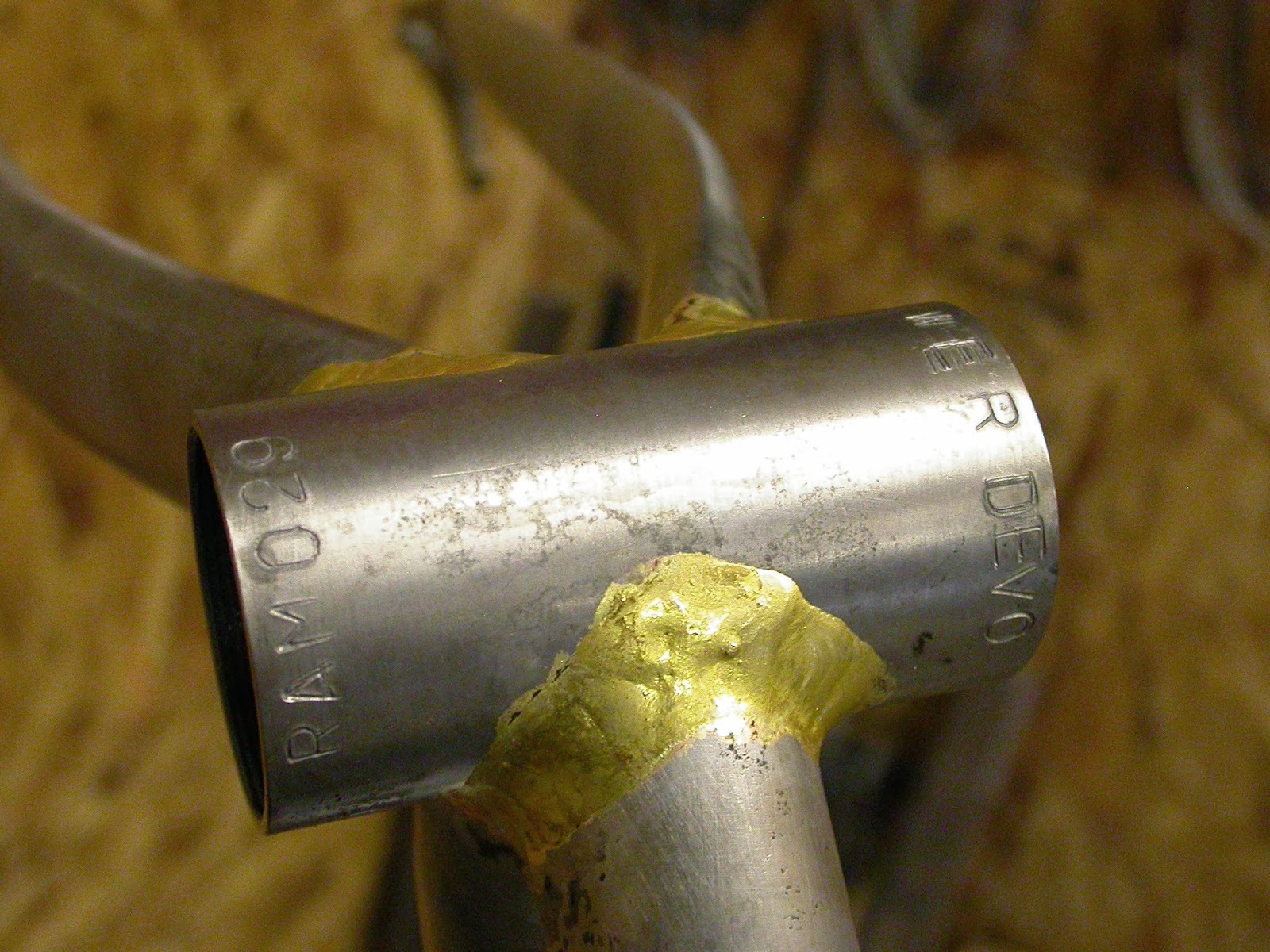 So in response to the statement above about 26" bikes:

I don't know what anybody else is doing these days, but...

I STILL MAKE THOSE!

....just like Gerald describes in the only video ever likely to make this blog.