I've been on a bit of a handlebar bender lately (hahaha).  A calculated bender though.  I mean I've been calculating my bender.  I mean calibrating my bender.  Wow, worst opening lines ever.  So I took some of that custom drawn True Temper stock and started turning it into some bar samples in order to make repeatable bends on the home made bender which is not machined, so not totally calculable, and more meant for bending fork blades, but works just fine for 7/8" tubing. 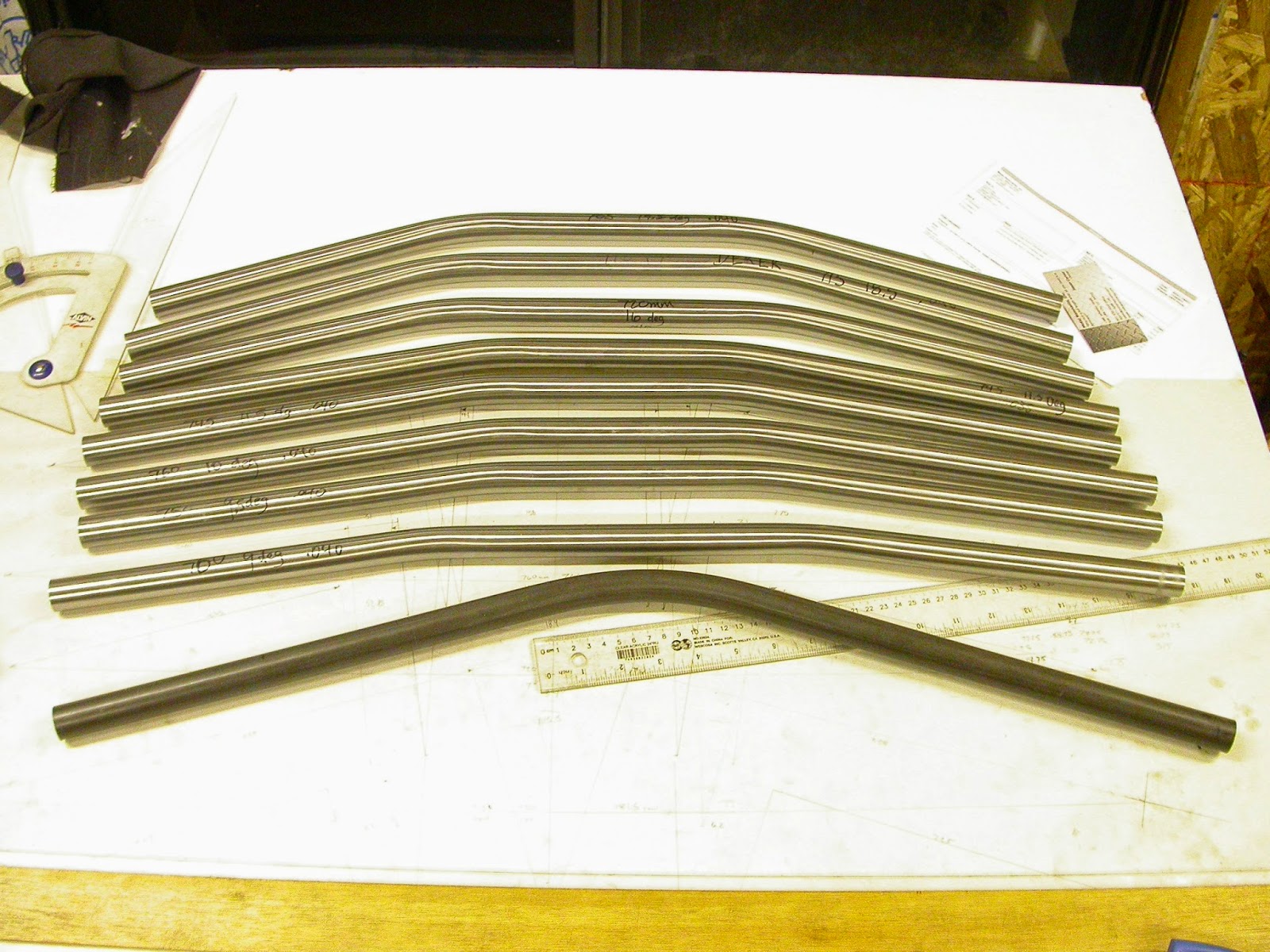 This being the machine era has led me to start working up some fixturing for handlebar pieces, particularly bull moose stem pieces.  Handlebars, especially fixed position handlebars, are always a challenge as you are taking a position that (hopefully) works for works the rider, yet that still has some degree of adjustment (bar tilt, stem height, stem extension and angle), and trying to replicate the position permanently.  Probably the biggest challenge in this is the difficulty of measuring all of the varibles as even when isolated they are still very three dimensional.  (Frames, on the other hand are quite two dimensional in design even though the end result is three dimensional).  Different brands of handlebars place the bends at different locations along the bar giving a different extension and hand position between bars.   Its not just 9 degrees bend and 700 mm wide, its where the location of the 9 degrees sits giving the end result of 700 mm.  Placing the bends more inboard toward the centerline will result in a hand position with less extension and a longer piece of raw stock.  Then there's rotation and upsweep and the fact that this will all be altered on bikes with differing head angles.  It all comes back to hand position in whether or not the effort is a success.

I decided to start with the hardest one first--the gray one with the large single bend on the bottom of the picture above.  Single bend bull moose 17/34 degrees sweep with 80mm extension based around an existing setup that was working for the rider on a bike with a 70 degree head angle with no stem angle.  With the bend of the new bar being forward of where the stem clamp of the current setup would be, I was left to choose a point in space to establish 80mm of extension.  For me this is done by measuring in from the ends and connecting with a line to represent a regular handlebar centerline.  I used an existing bar for this measurement and adjusted as I felt necessary.  Now for the hard part, three dimensional mitre angles.  I plot work on a full scale drawing, but getting to this step stumped me for a while, and it made me wish for some tooling that doesn't exist yet, at least to my knowledge. 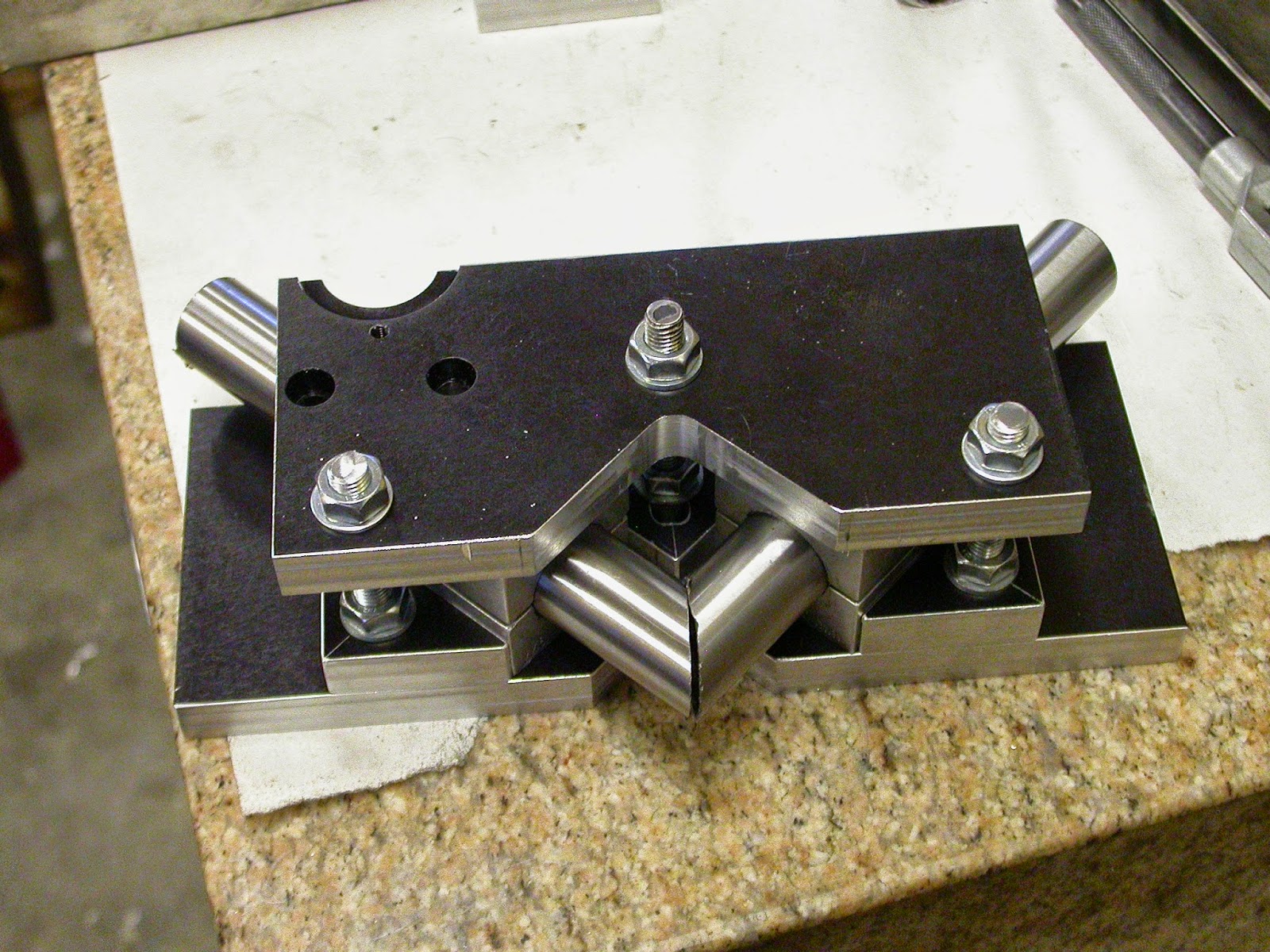 Work of this type usually goes better if there is an all encompassing plan laid out to the end, but sometimes that is just not possible and the problems must be met as they arise.  The latter was definitely the case with this project.  I started with making the fixture above out of some scrap solar energy parts without really knowing if it would fully accomplish what I was hoping.  I figured that if nothing else it would allow me to miter the steerer clamp, but was hoping to do all mitering without removing the pieces from the fixture which could create a whole new set of variables.  I made the miter for the clamp and was still puzzled by the bar angle needing to accommodate the 4 degrees of upsweep I had designed.  I left the pieces in the fixture alone for a few days and what finally led me to the answer was the realization that I needed to think of these cuts around the bar and not around the bike.  4 degrees of upsweep at the end translated to a measurable 1.5 degrees looking at the side profile which was then added to the head tube angle to clamp the bar.  The cut angle was matching that of the bar at 17 degrees AND I was able to mirror the cut so as to not change any settings or re-fixture between sides!  Confused yet? Now onto the next fixturing problem.  Thus far I've fixed these projects for tacking with whatever is laying around that'll pass as a flat surface.  Fortunately I was passed along an old Anvil seat stay mitering fixture with the directive to cut it up and make it work.  Awesome words right there.  The possibilities of perpendicular tee slots in machined metal are pretty endless.  For now I am just using the fixture as a flat surface for clamping as you can see here.  I did make some 4 degree wedges for fixturing the upsweep.  The steerer clamp is held on the fixture I made for the original bull moose project some years back.  Everything is lined up using squares off the flat and is then measured/marked for center.  All told there is much left to be desired in future tooling, but having a few more of these done will benefit that design greatly. 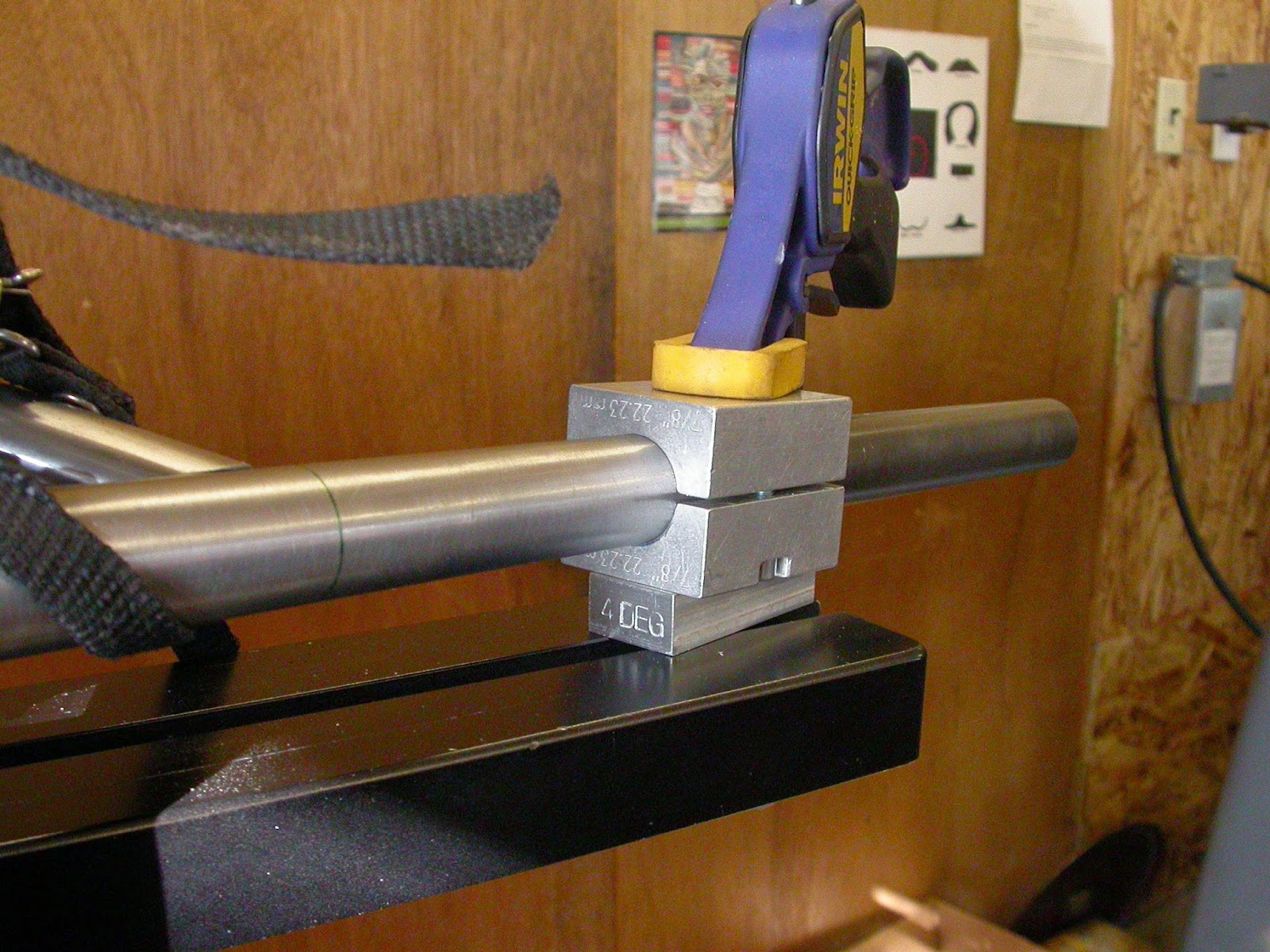 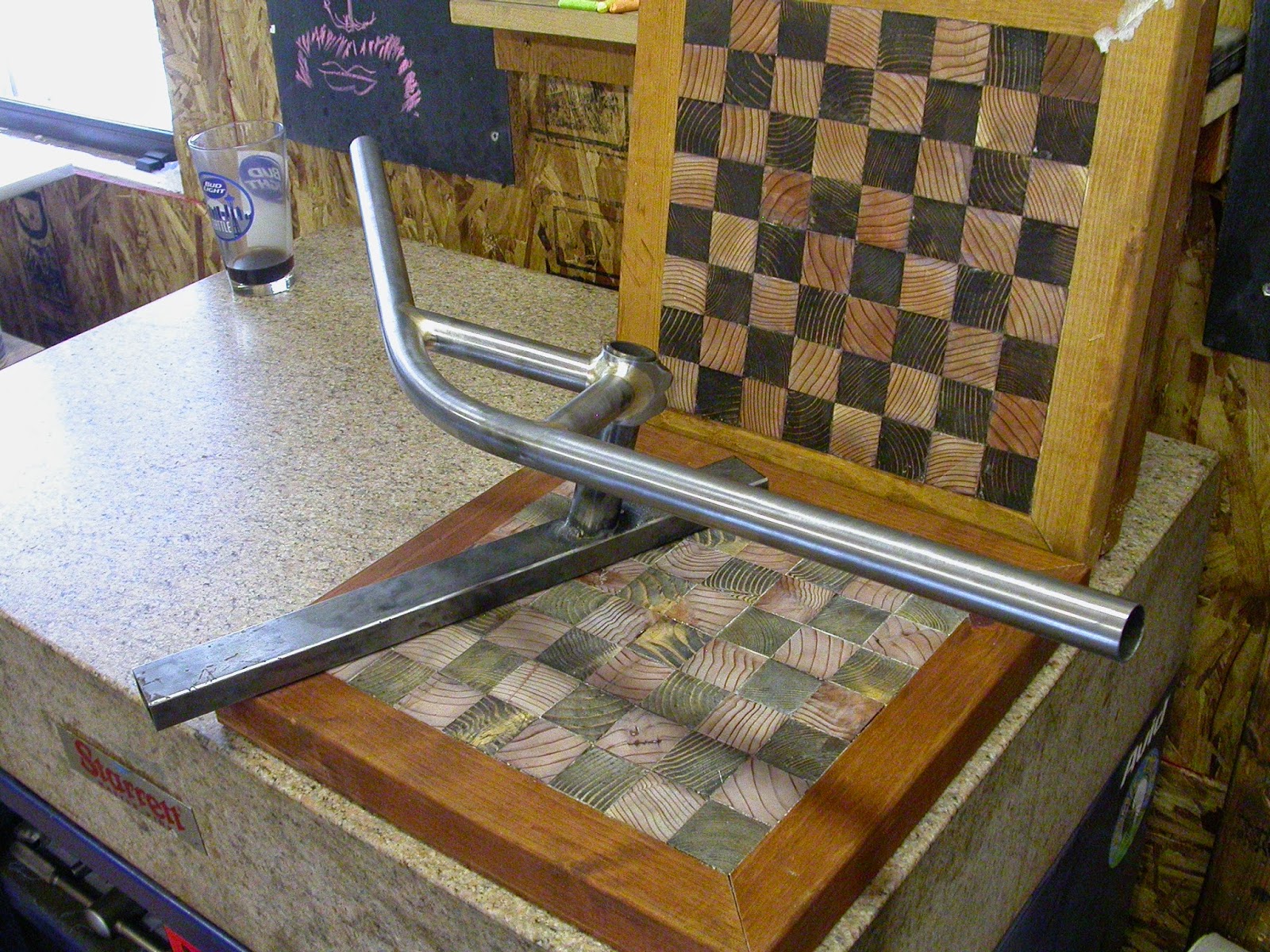 The finished product atop another manufacturing side project.   I'm really stoked with how the machine era is furthering the process.  Its been a complete re-calibration on my part, but a quite enjoyable one that I feel will continue to produce better results.  All told THIS bar probably took longer than if I had just cut it up with files, but that time investment will pay off in the next one, and the third one is just hours in the bank.  I read an argument recently that machines eliminate the artisan (artistic) element to bicycle fab, but I find little merit in this argument.  I'd venture to say that its an argument made by someone who has not used a machine.  You can drive them at your will, just like the bike in the end.  Sure you can use the machine to make cookie cutter product. Sometimes this is their place and rightfully so.  You can also use them to create plenty of things that you just couldn't with your hack saws and files.  Its all tools for the process.  Sometimes you need tools to make tools.  I will say that I'm glad to have the last six or seven years of doing things the way I was to serve as a background for knowing what I wanted to do in the machine era.  Turns out that isolating learning curves is a good idea too.
Posted by Richardo at 08:42 No comments:

I will now proceed to sum up the most missed spectacle of the Sedona Mountain Bike Festival: the Moustache March Friday Fun Hater Unvitational..... 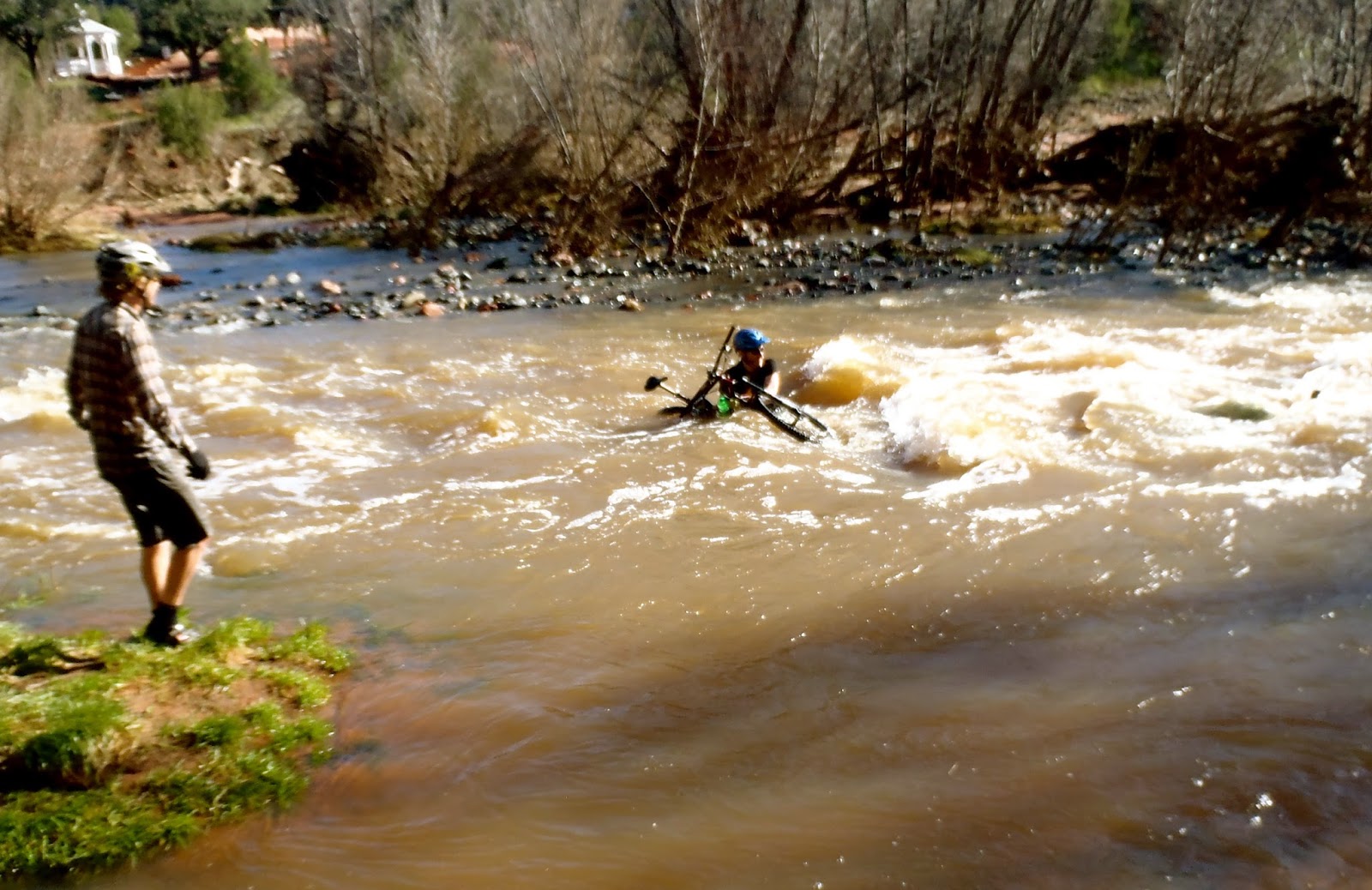 In the 6th promised hour and after much triumph and tribulation in the field of bonk management, the third attempt at crossing Oak Creek proved to be the divisive move in group dynamics.  The bonus miles, hours, trails and roads that followed this maneuver were left to individual devices.  ALL in attendance survived and were reportedly satisfied with the experience.