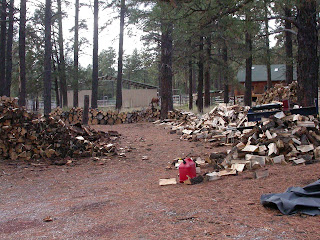 I've been balls deep into the wood pile this week trying to get the homestead ready for:

Then sometimes your old retro-grouch bike geek buddy rolls up to your wood pile with a van full of sweet new wonder bikes and offers you a private demo of the new Salsa Pony Rustler.  Pretty hard to pass that up.  There have been bike demos down the street all year, seemingly every weekend.  I didn't take out a single bike that wasn't my own all year, but after throwing a leg over the Bucksaw last November, I have been a good deal intrigued by Salsa's line-up.  They are one of very few (my opinion) companies really pushing the developmental envelope continually for the last five years, rising to the requests of some really top notch riders and characters, and in doing so have both opened up what were once nice markets to the masses, and outright creating others.   The Pony Rustler does just this: its a capable machine and I came away mostly impressed.  Being a nit picker and overly keen on my own steeds I had few complaints but most of them were fit related to a personal choice level. 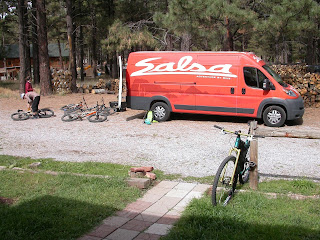 The B plus platform is here to stay and the potential here for cool fun bikes is off the charts.  I can't say I'm a big fan of spec'ing the boost though, or really why the industry decided to side step what people really want in these future bikes.  ("Boost" is what the industry is calling the widening of the drive line to accommodate the space required from 3" wide tires) From Salsa's point of view I get that its what's available in the form of OEM parts that work; its more that I don't understand the move from the industry.  The boost front hub gets a wider 110 mm OLD (outer locknut dimension) spacing.  Downhill bikes have run this since the original Boxxer fork I believe if not sooner, AND you get a 20mm thru axle that greatly improves performance.  Why make a silly and inferior hybrid axle system for a bike that's clearly meant to rip up downhills when better options have existed for years? And the same goes for the drive line.   The argument here is that going to the 83mm downhill spec bottom Bracket will move your pedals outboard, and it will....a whole 5 millimeters per shoe, I think cleats have more adjustment than that.

But going here will allow you to run something really novel in the world of future bikes....a granny gear.  With more people heading out with loaded rigs for overnighters and more, all those gears we used to take for granted ten years ago are actually still quite useful.  Less so for big rings, but those 2x setups are pretty attractive.  Think Colorado Trail, y'all.  I believe we referred to it as the granny gear 500 back in 2012, and even in the world of carbon wonder bikes I just don't see the topographical facts of mountains changing.  Really though, its four days after Marty McFly and Doc Brown flew into 2015 in a retrofitted nuclear powered DeLorean.  And just where are those hover boards, anyway? Can't we have these new wonder bikes without the influence from the road bike weight weenie market?  Don't be a sissy.  Its just a couple grams.

Those guys back in 1985 were proud to be making cutting edge 30 pound rigid bikes and you would have been proud when it got you to the top of the mountain and bugs in your teeth the whole way down.   I propose we re-appropriate "boost" as a fitness term for the added effort of having to heave that extra 10mm of crank spindle and 5mm of thru axle to the top of the mountain. 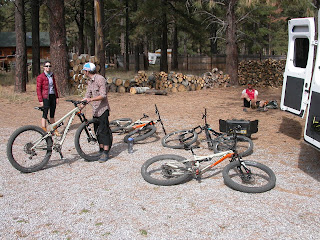 Ok, rant over.  Back to the matter at hand.  I don't really pay much attention to the mainstream bike market, save for what parts and "standards" are doing.  I, for one, am not the type of person in the market for a new carbon squish.  The whole point of posting this tonight is to give nod to those pushing technology in our sport, and to those truly talented beings of our biking world, one who just rolled up in an orange van and will offer much in the push into the future.  But today the notes were taken, and one of the most compelling notes was just how stoked the rest of the public was to ride this bike at the official demo yesterday.  So I do say Mr. Spielburg: Here's your future.

Posted by Richardo at 21:07 No comments: