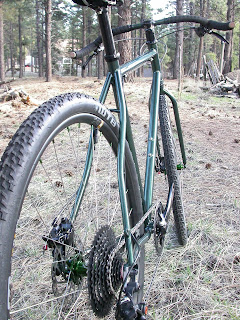 As noted in the last post, paved roads are sparse in the northern half Grand Canyon State.  At least are the sort of paved roads one would want to ride a bicycle upon.  Dirt roads, however, are endless....everywhere.  We have a distinct dichotomy to these dirt roads, with those ranging from (at times) smoother than the highway surface to those that are rougher than the nastiest mountain bike trails. 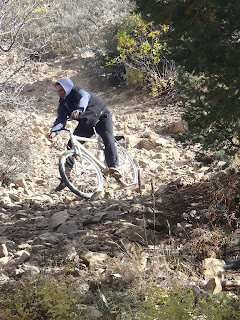 For the adventurous, a ride aimed at putting in even a slight distance on the roads of our national forests quickly turns to mountain biking.  Bearing this knowledge from my own adventures here in mind, I set out to build a capable and confident dirt road bike for Kristin.  Not a mountain bike, nor up to the extremes pictured above by any stretch, this bike is designed to keep it fast and comfortable on the improved to unmaintained roads rather than the two tracks and logging/mining roads, and still hold its own during those instances of adventure where she finds herself unexpectedly mountain biking. 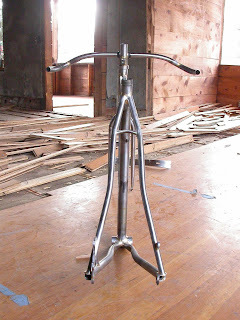 The major design premise of this bike is the handlebars.  The "shallow drop" bars are a three piece design first conjured from a project titled "The Widest Drop Bars Ever Made."  The reach of the forward bend of the typical drop bar is significantly reduced and the hoods position is mimicked with extension/lever clamp area.  This shorter reach allows for the front wheel to be located further forward through a longer top tube than a traditional road or cross bike would allow, which has the effect of lengthening wheelbase, smoothing the ride, and calming the steering.  All these effects to handling become particularly important on the rocky descents of Arizona dirt, and save energy over the course of a long day in the saddle.  Width at 600mm also aids comfort and stability, though would vary with rider preference.  This bar also forgoes the familiar integrated shifter brake lever controls in favor of mountain bike/22.2mm clamp shifters and brake levers. 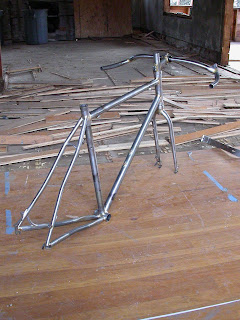 The frame design places the rider fitting in the cockpit with the primary riding position in the drops where braking is the strongest with a 90mm stem.  The taller head tube length is achieved from this position and this particular fit required a sloped top tube.  The tops of the bars toward the stem clamp will offer a slight upward position for reprieve, as handlebar drop from the saddle is very slight on this particular bike.  Angles are traditional NORBA: 71/73 head/seat and BB drop is 66mm.  Tire clearance is for 40mm with room for that nasty AZ mud. 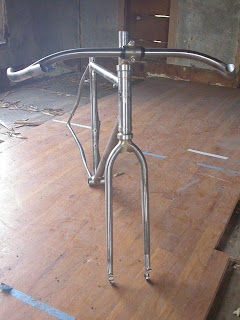 The build kit on KP's Dirt Love is some-what non-typical, even by my standards.  The Industry Nine cross hubs are mated to WTB KOM i21 rims and Nano 40 TCS tires, tubeless of course.  From here we diverge a bit.  I just had to try the new Yokozuna cable actuated hydraulic brakes.  They're meant to make for an easy conversion for use with short pull (STI) levers and seemed like a good fit if ever a traditional drop bar were installed.  So far performance exceeds all expectations, especially considering they cost about the same, maybe a hair less than the Avid mechanical discs I was initially going to spec.  They did require a bit of material be removed to achieve proper adjustment with the 160mm rotor atop the Paragon front IS disc tab (not the first brake I've had this issue with).  Long term verdict is still out, but pending a seal failure, these units feel and work great. 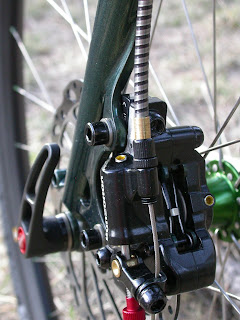 The drive train is the newest 11 speed offering from Box Components.  I was curious about the shifter thinking that a traditional rapid fire or Sram trigger shifter might interfere with the main cross bar of the handlebar....all work fine, but the Box offering has a good feel and works well with this handlebar.  The derailleur leaves a little bit to be desired in terms of adjustment, it seems that the inner limit just isn't quite inboard enough, even with the limit screw backed all the way out.  It seems to shift fine through the range.  Its not the nicest stuff out there, but is priced accordingly.  The 11-46 cassette fits the traditional HG freehub and is value priced.  Its looks fit the price...cheapest cassette I've bought in years...but it utilizes an aluminum spider (a must) and actually shifts quite well mated with a Sram 11 speed chain. 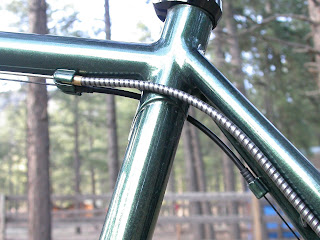 Crank is a Sram Apex 1x unit with a 42t narrow/wide chainring.  Its mated to the new bottom bracket from Hope Technologies.  I am hoping that this BB will far outlast the stock offerings from Sram and Shimano. 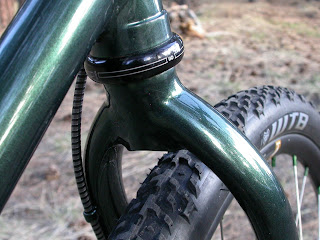 The rest of the build is my typical Cane Creek/Thomson mix. 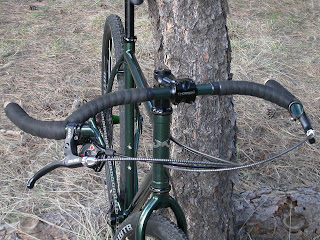 This year's cycling event will take us to the Sawtooth National Forest for Rebecca's Private Idaho 100 miles of gravel.  We'll see if the roads of the Sawtooth are as harsh as those of the Coconino can be.  Should be exciting! 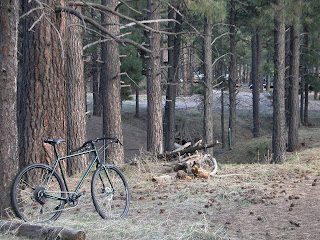 Posted by Richardo at 21:42 No comments: