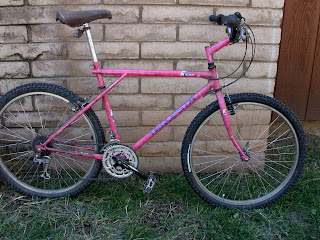 I finally got this up and running as a winter commuter.  Its been in my hands for a few months and came to me via AQUA and the Phoenix Craigslist.  $65.  Plus $20 for the delivery.  It came to me almost all original with very few miles but I went ahead and swapped out some parts to make it a little better riding.   Best I can tell its a 1989.  GT was one of the first companies to start pushing 1 1/8" headsets in 1990 or so and this is a 1".  The lead sled frame weighs in at about 6 and a half pounds but the tapered uncorrected fork and matching stem are sweet.  Its even got an internal brake cable.  The BB is super low--11 inches--so I scrape pedals even on my commute.  It barely clears the 2.0 street tires that came but this thing is super fast and very stable on the pavement and my feet are never far from the ground which is kind of nice when you hit the ice patches.  Came with mostly Suntour XCE and plastic coated Diacompe U brake/canti combo.  I swapped out those for some parts made of metal and swapped the "Oval-tech" (Suntour's cheap knockoff of Biopace) cranks for an LX with a 110 bolt circle and a sealed BB.  I swapped the flat bars for a bar with a huge rise and gave everything else a proper overhaul.  I think my favorite part is the seat...Its got a brown skin and a plate across the back that says TORNADO....yeah....the ass tornado.  Sometimes breathing new life into old bikes is at least as fun as building new ones.  I think I might just outfit this one with racks and make it my frame hauler as my powder coater is on the other side of town.

Posted by Richardo at 20:08 No comments:

One of My Favorites

This past weekend was the GABA Fall Bike Swap in Tucson.  Its one of the coolest events I know of.  I've managed to make it down every other year since 2007 and this year held up to and exceeded all expectations.  We loaded up the Intergalactic Space Cruiser with bikes and parts and friends and art and some completely random items and some beers and cruised on down Friday to descend our rowdiness upon Tucson.  We started at Brain's house that evening.  A round of hot toddies led to a dumpster diving mission with Brain's two year old daughter.  Somehow mom allowed for this under the premise of life lessons to not waste.  I'd have to say it was pretty cool seeing someone so young carry eggplants from the garbage and place them into her bike trailer....and having a child along brings instant credibility to just about any situation.  We wound up back at Brain's house to cook our Thanks Veterans dinner and sat around the table well into the night laughing about stories of the past and watching the dog make out with the rocking horse.  Holding true to tradition, very little sleep was had.

Saturday.  4:30 wake up.  Coffee and bike swap.  We drove over and started setting up our table well before dawn.  We flew the pirate flag of course, representing ourselves proper.  Everything here must go.  We stole some saw horses from Brain's neighbor and some plywood from Brain's climbing wall and made a table.  People were picking over our stuff with headlamps.  Traditionally the pre-dawn hours are the best time to sell carbon fiber bits....unfortunately we only had one.  It was the last item sold of the day.  If someone left something on our table, like a cup or coffee or a pen, it was sold.  We successfully traded a dried out Sharpie for a banana that was sitting in some guy's pocket.  People were heckled into buying things they didn't even want.  We even gave buyer incentives:  A cuban cigar to he who buys the Kona or the VIKTOR torch set, ginger mints for random upscale sales,  foil antennae for those who need help communicating their purchases.  All told we had more fun than is safe at such an event and made our wallets fat doing it.  Next time....more drinking!

But seriously people, what's the deal here?  Why is it that we have to drive 250 miles to come to your town and make your bike swap such a good time.  Take the fun into your own hands and stop taking yourselves so seriously.  Where are the Tucson bike community locals that like to party and have a good time?  Surely you have things to sell too.  Why is it that so many square people are out on the streets selling off their back stock of spandex?  It doesn't take a whole lot of effort or party to have fun here.  Just try.  Show some excitement, its six city blocks of free bike swap!  Scrap the tents and the fancy displays and for God's sake, stop taking yourselves so seriously! 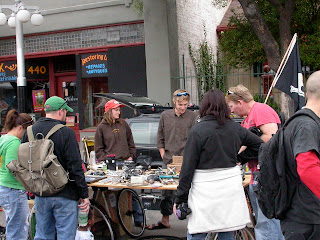 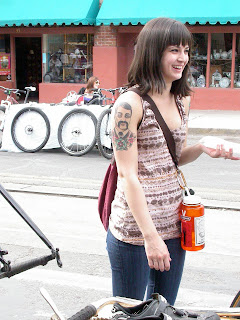 check out this girl's rad moustache tattoo.  I don't know who she is or who her tattoo depicts, but she clearly knows how to have a good time.

...really a half hearted attempt at a report of the goings on in the month of OktuberFest!.  It was epic...as always.  Every year I tend to think I exist in a world of perpetual summer...that summer will go on forever and come OktuberFest! I realize that isn't exactly a reality and scramble to party as hard as I can until eventually and inevitably I drop, collapse from the tired that is left from an endless summer only to wake up and pick up the pieces and accept that winter is coming.  This weekend was the drop....or maybe it was last monday and this weekend was just an aftershock.  Anyways OktuberFest! is behind us now and winter is staring me in the face with early season snow and a wood stack that looks a little short.  The last month was pretty much a never ending costume party that brought me down the colorado river with the only goal in the end being to weird out as many regular folk as possible.  This trip morphed into my everyday life in the aftermath....and the world is undoubtedly a better place for it.  All I can really say about the trip to the likes of you reading this is....YOU MUST DO THIS!...and when you do this, do it right, none too seriously, and with as many costumes as you can possibly conjure up.  Everyday is a new day in the canyon so why not let it be halloween?  Of course there are those who will never understand, but that just makes it all the better for those that do. 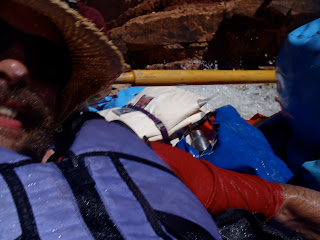 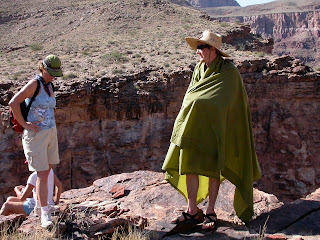 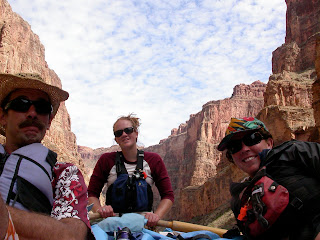 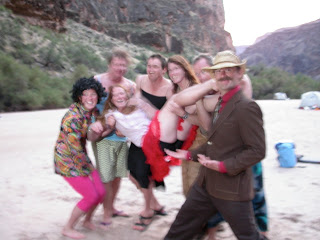 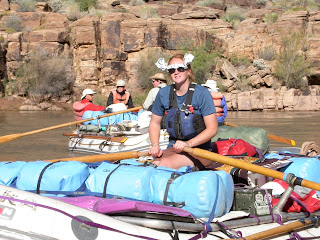 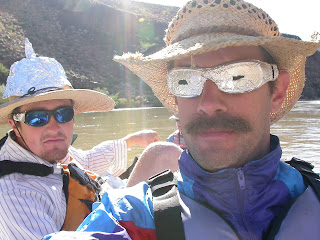 "when the going gets weird....the weird turn pro."

Posted by Richardo at 20:26 No comments: