Adventures in Craigslist volume 231:  A horizontal mill in Williams, the next town over, and given the fascination and the rarity of affordable heavy (or otherwise) machinery here in AZ, I figured it was worth a trip over to check out.  It followed me home from another old guy's shop, him sighting that it wasn't up to the task of planing metal that he had hoped it would accomplish.  In addition to the mill came 10 or so slotting cutters, a new (to me) drill press and two metal tables, or rather table parts shoddily cobbled together to look like tables.  The price seemed right and without driving upwards of 700 miles or paying freight, this stuff is hard to come by in these parts, so I forked over some bills and loaded up the truck.  That was at some point last summer and upon getting it unloaded and onto a bench to inspect I decided that a full overhaul was in order and there it set until I found the time to mess with it last month. 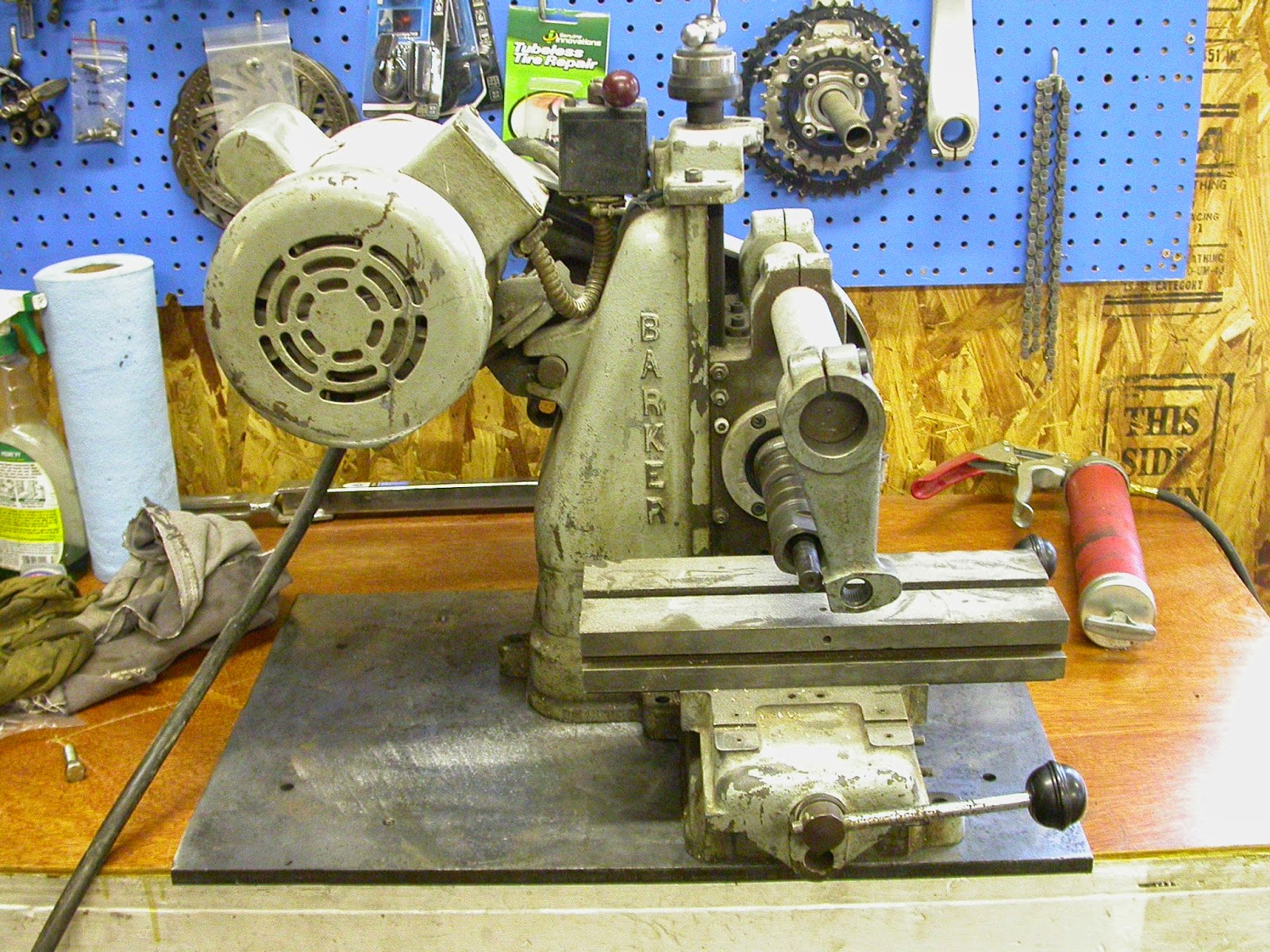 Now I'm no machinist, more of a machin-er at this point, definitely a tool junkie, but I am not exactly versed in what to look for in a good machine tool purchase.  What I saw that day in Williams looked like it had potential so I brought it home.  A little research found that this is the PMO model Barker horizontal mill, with overarm support for slotting operations.  It has a micrometer feed on the z-axis and lever feeds on the x and y axes.  The action in the feeds was functional with a little slop, but seemed serviceable so I proceeded with a mechanical overhaul of the gibbs and slides.  The 4x12" table appeared to have had a tool or two run into it, not showing true mill grade flatness, but seemed adequate enough to bolt up a vise; and a little bit of galling showed on the y axis slide, but cleaned up with a file to smooth and tight action.  Little bits of Phil Tenacious oil and grease, a bushing here, and a new bolt there and within a few hours this thing was feeling mechanically sound.  Now to make it run. 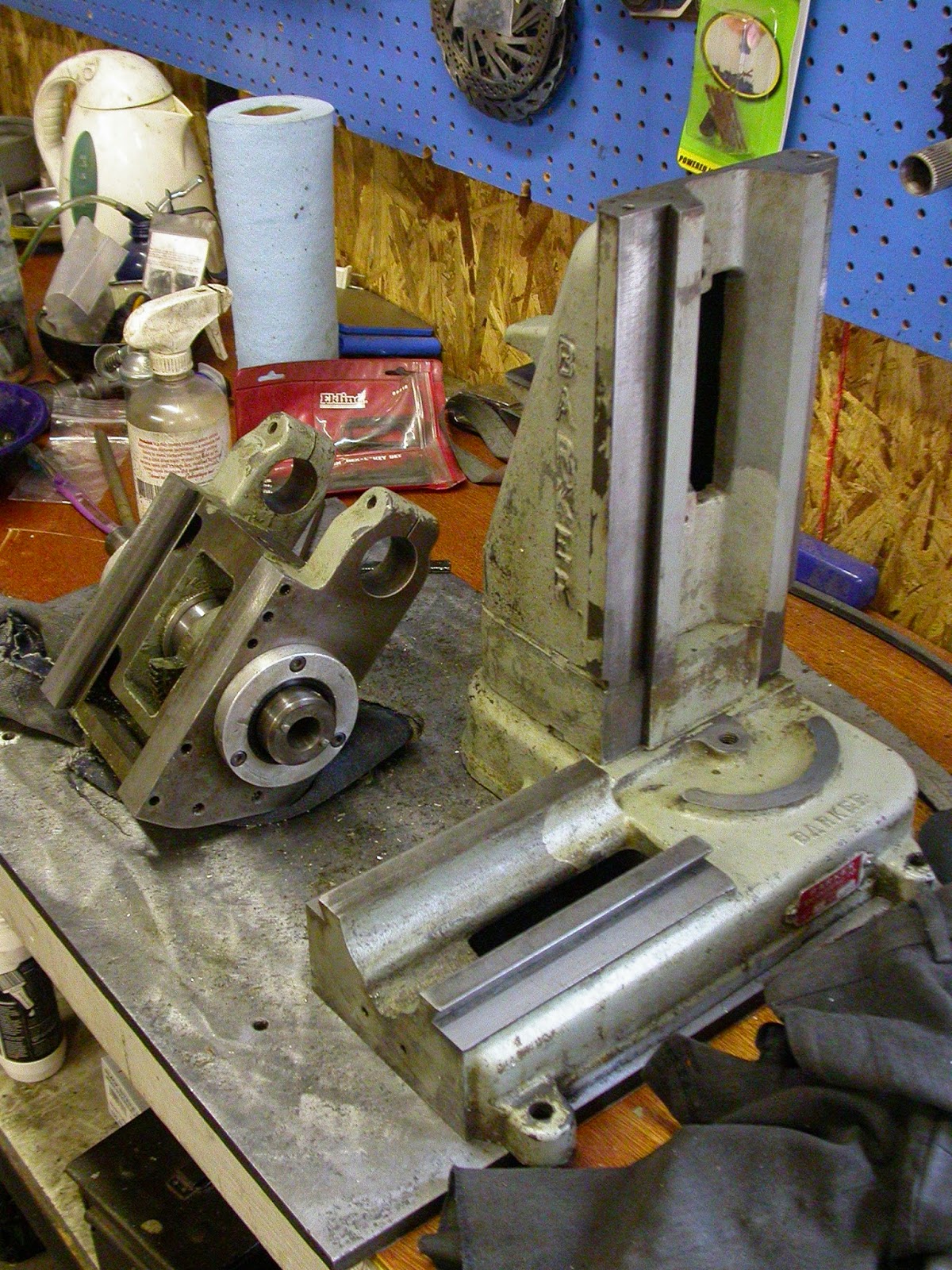 So the information listed above was exactly all of the information I could find on this mill, save for the fact that it is still in production relatively unchanged over the last 60 years and that the current purchase comes with a five speed belt drive and low or high gear set.  This feature seemed to be absent on this unit.  The 1750 RPM motor was geared up with a 1x3 pulley system making it suitable to cut plastic.....maybe.  No wonder my man in Willville couldn't do anything with this machine.  To boot, when I took the bracket holding the reversible drum switch apart to get a better look at the wires in the rotting power cord, the plastic drum promptly crumbled in my hand as did the rubber once containing three strands of copper wire.  Add those to the parts list. 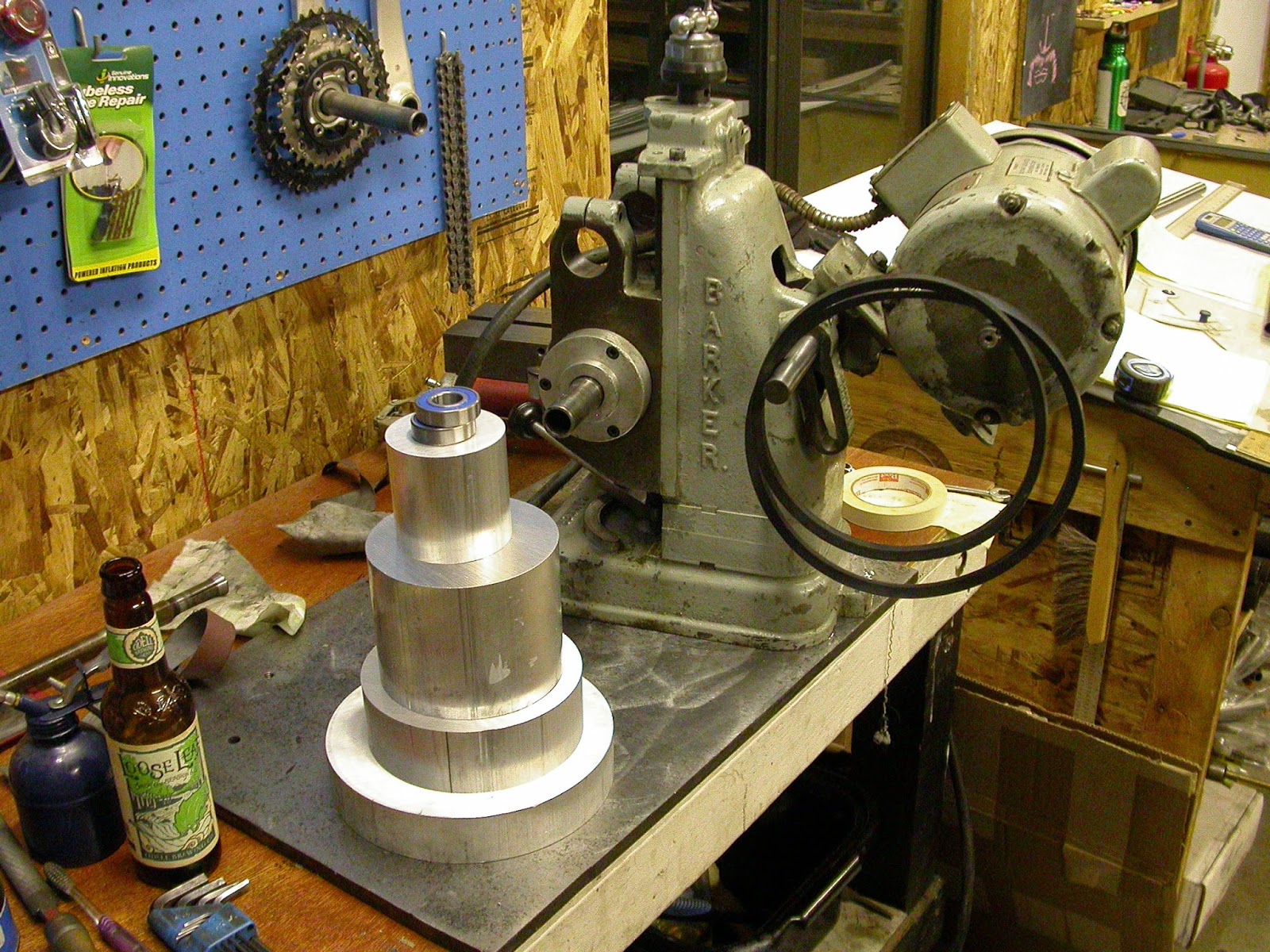 As my reading turned up that these are intended to be setup for single task production (PM=production mill), my main hope for this unit was if nothing else dedicated chainstay mitering.  But looking at the over arm support and the slotting cutters that came with this machine, it seemed that slotting would also be among the tasks performed, as well as main tube mitering.  There really is not much to this thing so it seemed as though changing setups between tasks would not be too terribly time consuming.

The most productive source of picture information I could find on this mill was eBay.  That said photos were not very lucrative here or anywhere.  I was hoping to get a look at the gearing system, particularly one with the rumored low gear drives.  Nothing surfaced so I went about designing a new belt pulley gear system for this mill.  Working backward from what I perceived to be this mill's future work loads, I came up with a range of usable speeds I thought would be adequate.  It seemed prudent to use the slotted clamp piece dangling on the "rocker spindle," that solid 3/4" bar that balances the mounted motor with the mill head, as the basis a tensioning spindle for an idler pulley on a two belt system.  Now the question would be one of what would fit this relatively small space AND allow me the most usable gear range.  Several evenings of calculations with an online Belt Pulley Calculator (linked) proved invaluable.

Envisioning a usable gear range somewhere between 100-150 RPMs at the low end and 1000 RPMs at the high, the next factor to consider would be the block width of the pulleys and the load on the spindle and bearings at the mill head.  Looking through some general information on belt pulley dimensions it seemed that a 1/2" belt (type A) would be easy enough to find and a type A pulley would be easy enough to make on the lathe.  The overall width of one pulley is 3/4" so that would give me room for a 3 pulley stack on the 1" diameter head spindle.  Pulley diameters were chosen using the distance between centers feature in the pulley calculator and by matching belt lengths.  Changing the input/output values for RPMs, and working forward starting with the 1750 RPM motor, then backwards from my desired working RPMs allowed me to determine that a fully overlapping transmission (such as one found on say a 12 speed drill press) would not be feasible.  The gear diameters required within such a small space would not allow for this.  With some room to grow back toward the machine casting I determined that a 2 speed reduction system off the motor would drive an idler/tensioner pulley stack, giving a six speed transmission.  There really is a lot going on here spatially, so playing around with the calculator both forward and backward was what made this all possible.  Low gear on the motor was determined to be 2":8" and low gear off the idler was determined to be 2":6" giving an overall reduction of 1:12 and a calculated low spindle RPM of about 145.  From here, belt lengths were held constant to determine a higher set of gears for both systems allowing for equal throw in the tensioner that had yet to be designed.  A leap of good faith here that with these rough paper dimensions in belt pulley calculations, something could later be created to accommodate belt tensioning in the remaining space. 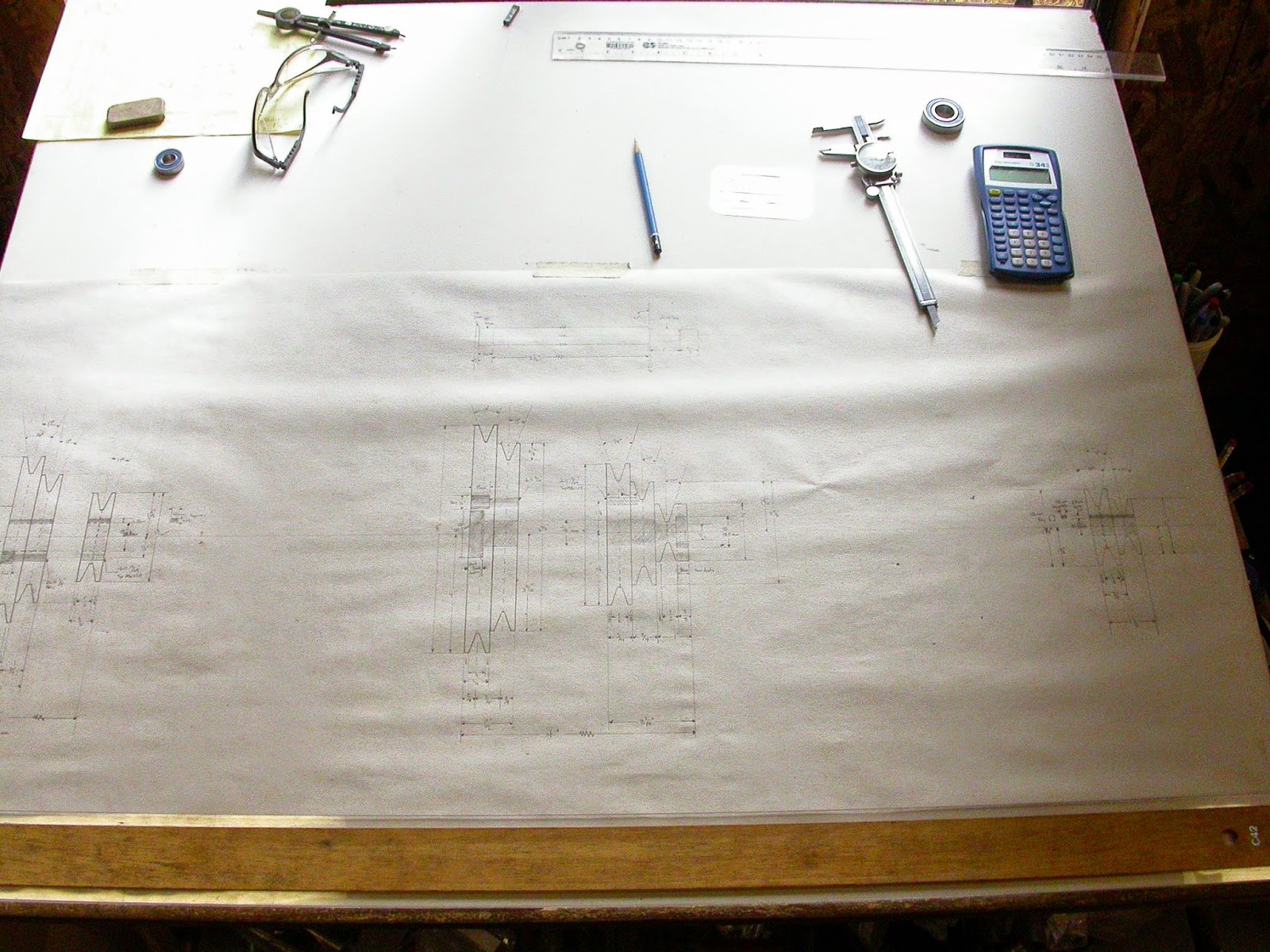 With pulley diameters determined, it was time to shop for material.  Aluminum seemed like the best choice for shaping on the lathe for speed sake, and cutoffs were substantially cheaper as they got shorter, so it seemed smart to bolt together the pulley stacks.  Doing so would also reduce time on the lathe.  I filled a 35 gallon trash can with the stringers of four pieces of aluminum. 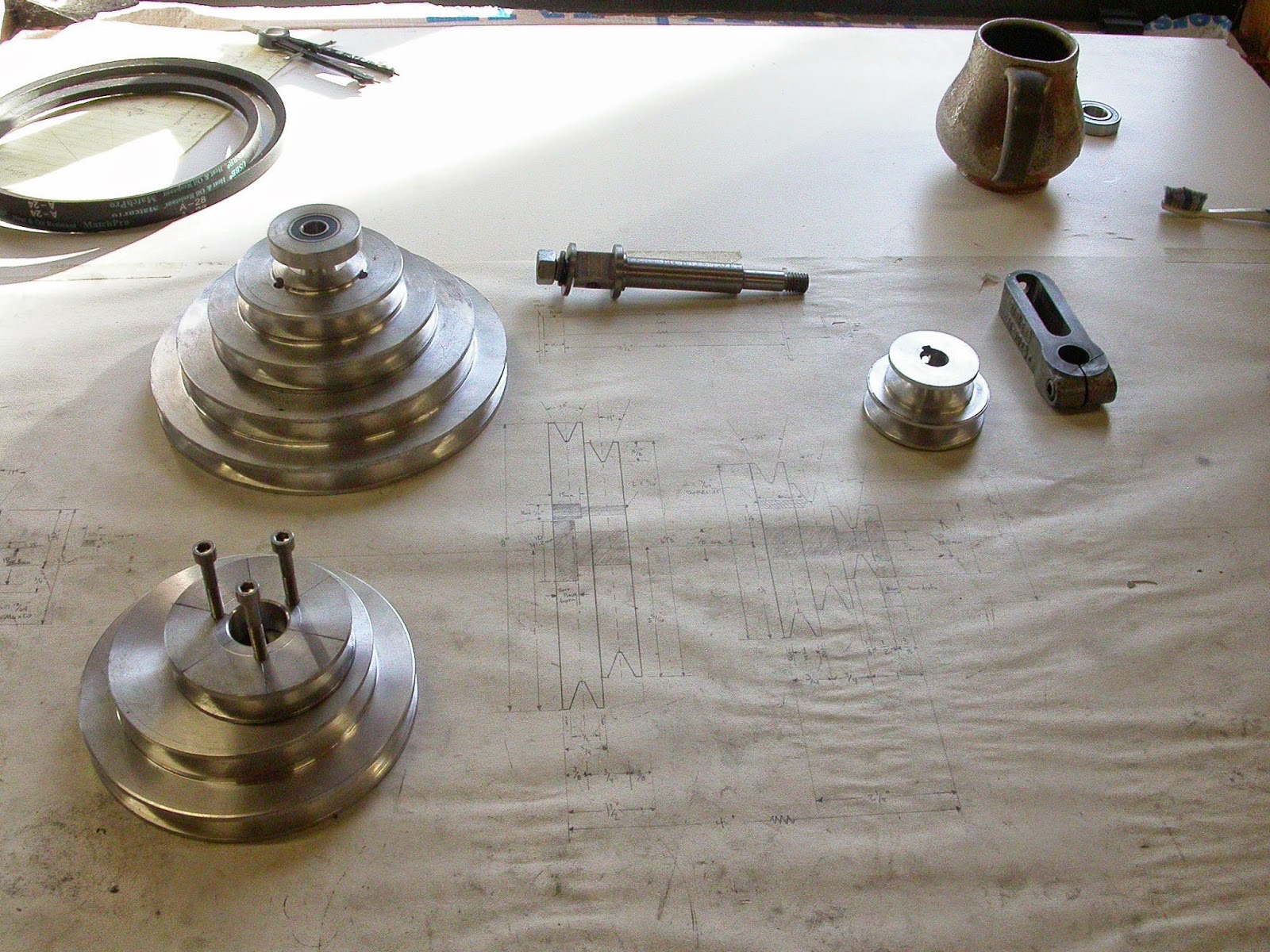 As assembly commenced, some tweaking and re-working of certain pieces was needed, mainly the tensioner mounting bracket and spindle underwent several modifications to allow for clearance in the now tight space between the main casting and the motor.  The motor also had to be moved back an inch or so and was accomplished with a plate with offset holes.  One of the belts was miscalculated an inch too short.  Otherwise the whole process was void of defeatist notions and tool throwing, always a plus when fabricating on a "leap of faith."  Below is how the setup came out under tension and operational as of last night. 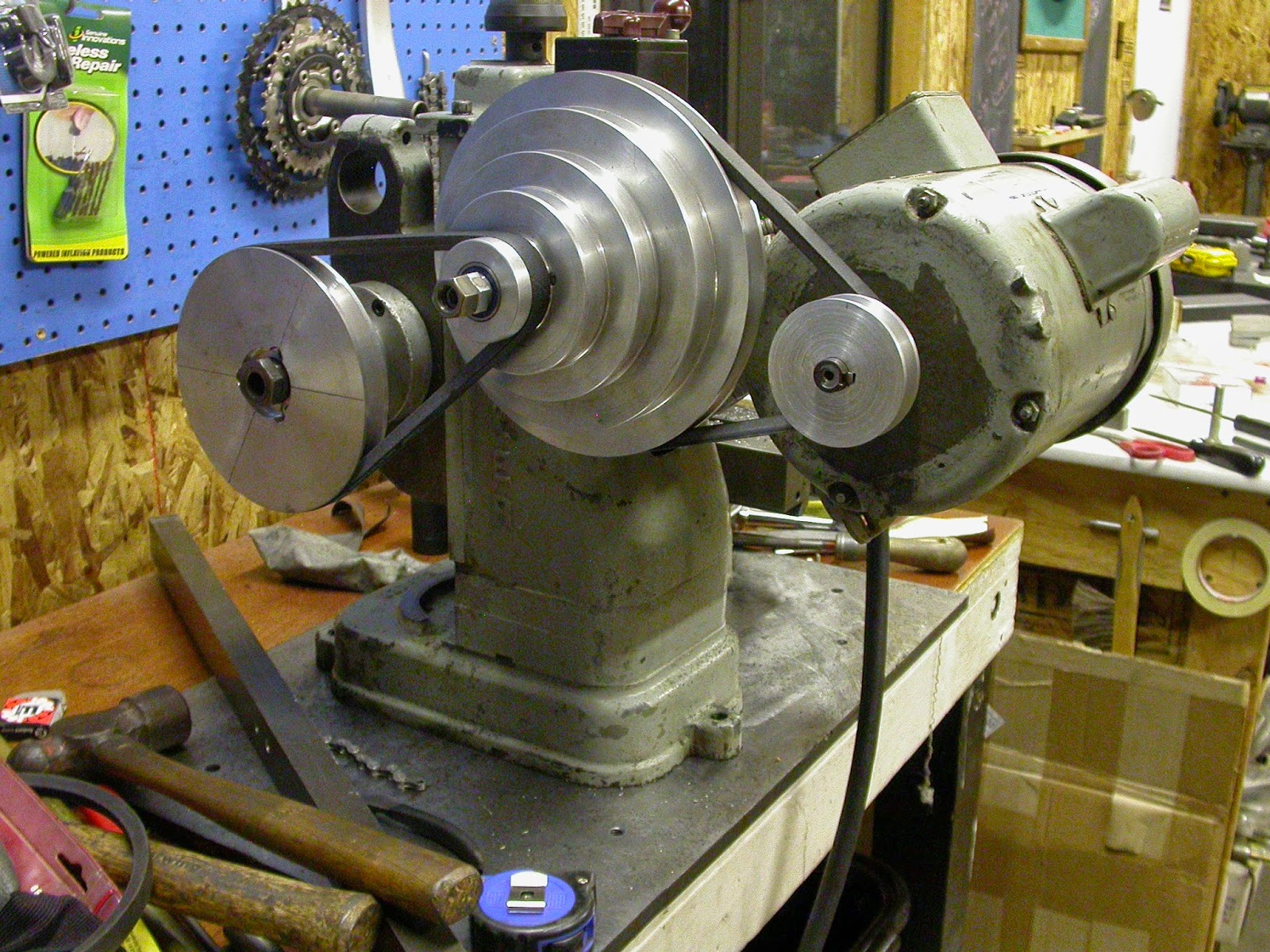 Below is a closer look at the back side of the tensioning setup.  The square plate is bolted to the spindle with the two button head screws at a tolerance that allows the spindle to slip freely in the slot of the gray mounting bracket.  Tension is provided by the screw on top passing through the mounting bracket and threaded in the spindle.  What can't be seen here is the face plate (think four bolt bike stem) that now holds the mounting bracket to the rocker spindle as the original pinch bolt just took up too much room.  Eventually I would like to add a quick release mechanism to the tensioner screw. 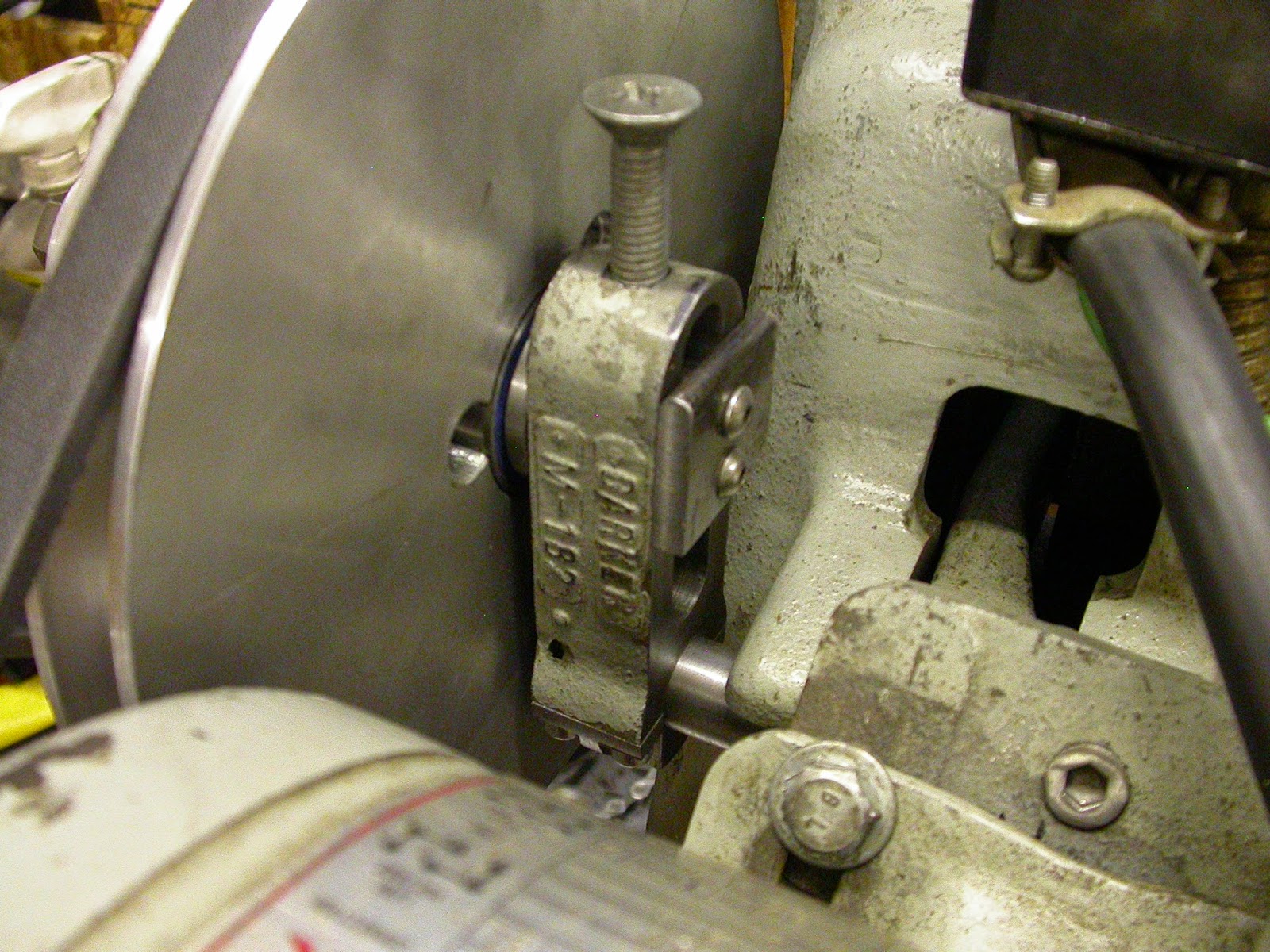 Had to make some custom hole saw arbors for the 1/2" 3c collet.  I'm not sure yet if these are beefy enough to handling cuts with hole saws up to two inches, but it gave me a reason to learn to thread on the lathe.  Next move may be to try and make some arbors that bypass the collet and tighten up directly with the draw bar. 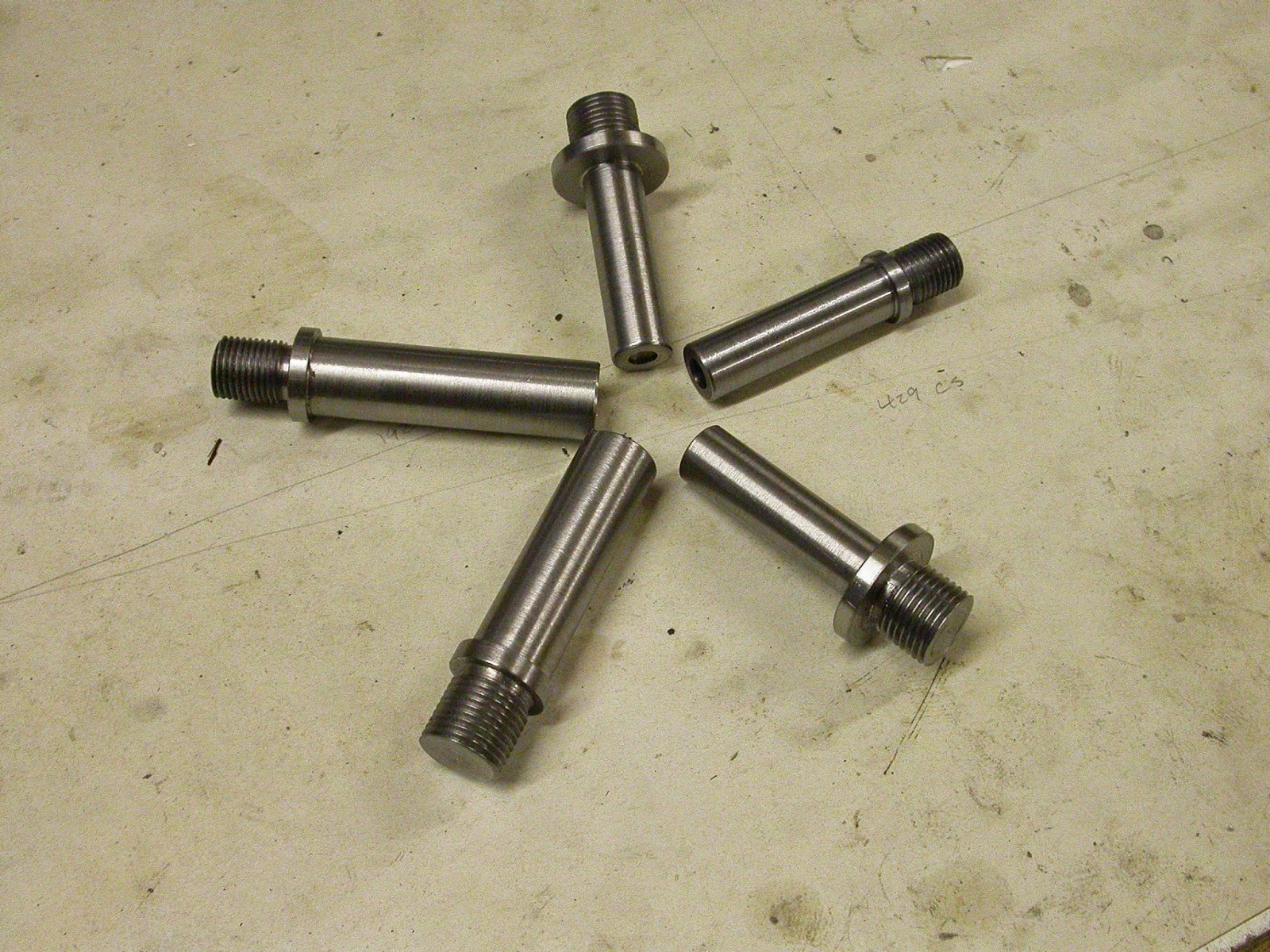 Finally the mitering setup at first go.  The vise pictured here leaves a little to be desired as clearances are tight when turned to angle and the jaws are fairly short.  Successful miters were made, but some tweaking in the set up of the z-axis along with some centering jaws in the vise would be very helpful. 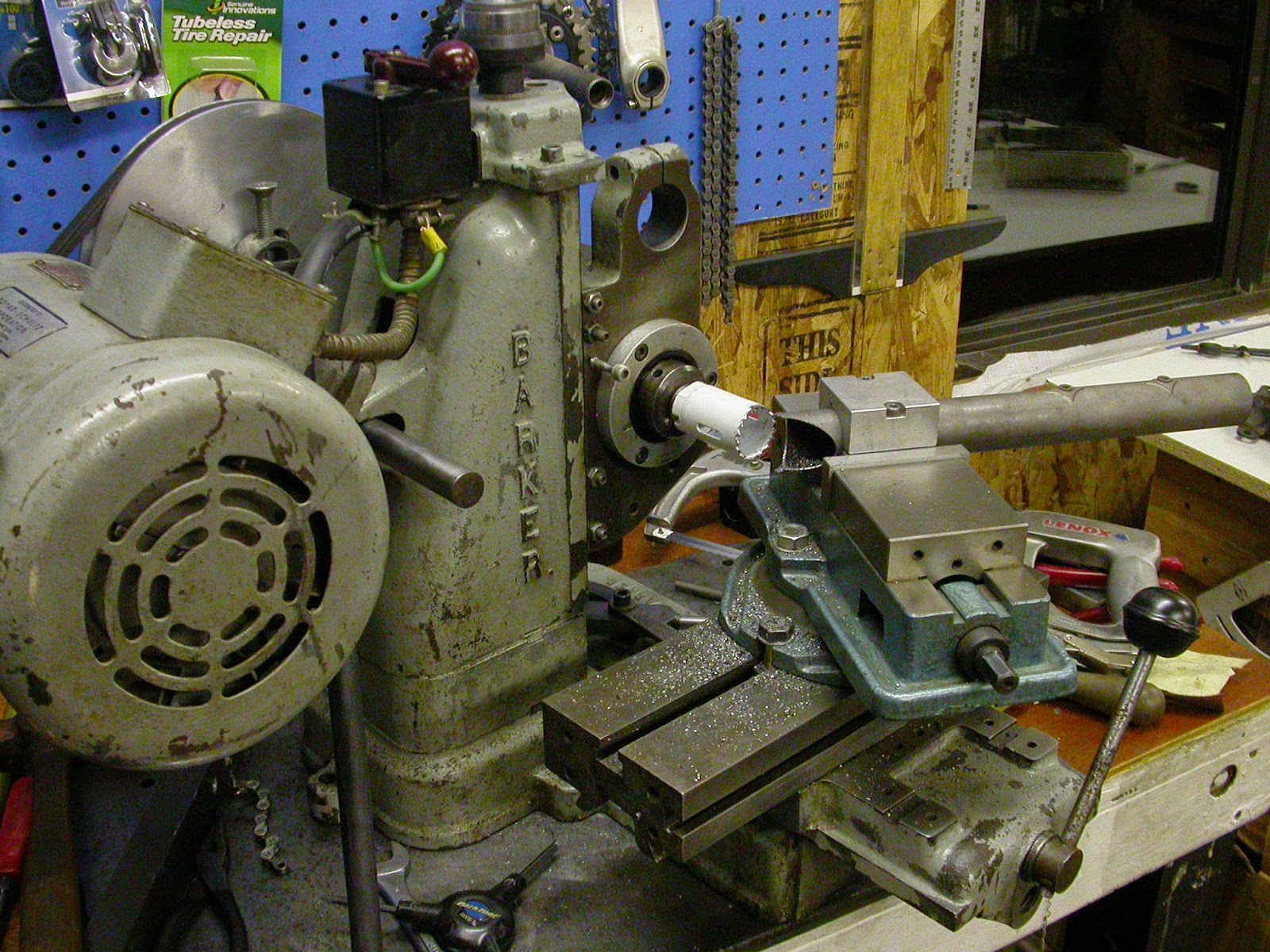