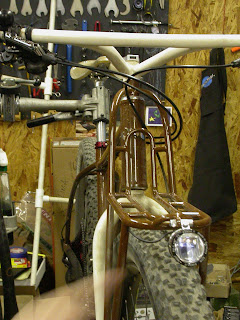 Y'all may remember the Krampstache from here back in late '13, or perhaps you first saw it when it got its 5 minutes this past spring when Ray derailed in LA and wheeled it into Radavist World Headquarters to have it packed before Kooking off in Aussieland.

That article can be reached HERE.

A little back story:

This bike was built shortly after Surly had gone out on yet another limb and introduced us all to its latest buzzword: "Plus Tires," and had given those early adopter types a bike to try it on, Krampus.  Ray snatched one up and in the subsequent months I had the opportunity to watch him ride it on a couple off-road multi-day routes.  I was impressed at how well that bike maintained its momentum and traction over things that would knock my 29er to a crawl.  But as with many production bikes the fit was off and there were some things about it that just didn't add up: why such a slack head tube angle on a bike that still needs to steer, why the insanely short head tube, why a suspension corrected fork with no option for suspension?  It was a jumping off point, and enough to convince Ray to have me make the next one around a more tour-minded stance.  The resulting build featured the only choice in tires available at the time, setup ghetto-tubeless (tape in sealant was still gaining momentum), and laced to Surly's abomination of a rim, the Rabbit Hole.  Again Choices were few.  The build was largely my choice of tried and true parts that the most skeptical cynic would trust. 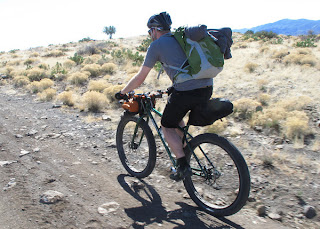 While I was obviously thrilled to have my work featured where the geekiest of us all frequent for a bike I had made more than three years prior, the flurry of comments that followed displayed a little blemish that I sure didn't remember being there when the bike left the shop.  And even given the fact that the article produced more interest in subsequent rack production (sorry folks, I just can't chase one-offs around the globe for something *that* custom...only with a frame) than it did criticism, I just couldn't shake the bother that in the limelight that one little detail slipped through my fingers.

The comment was: "As awesome as it looks, I'm skeptical of the long term reliability of the rack/headset interface. The rack collar is not flush with the headset top in the photo and this is not going to improve with touring use."

And there it was staring me in the face; 10th photo in the sequence.  I'd say the comment was pretty spot-on; I'd have those concerns if it were my bike.

It didn't leave the shop that way, no way.  It doesn't show in my fairly extensive photo record. I wanted to defend myself in the commentary in the very least, but my 9 year old lap top hasn't had a supported browser in at least four years and would allow none of this.  Neither would my cell phone so far into its life that it mainly ran on A/C Power.

Needless to say Ray was off to tour down under and I was anxious to get my hands back on this bike.  When he returned we hatched a plan for a rebuild that would forward the existing steel platform into modern era with new wheels, a front generator hub with integrated light and usb charger, a 1x11 speed drivetrain, and some better, actually tubeless, rubber.  And finally I'd get to crack the mystery of the misaligned headset race. 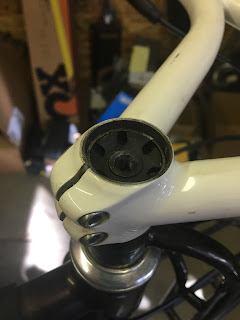 The first thing I noticed upon pulling the stem cap was the star nut had pulled up.  Not likely the cause of our issue, but potentially a contributor in not allowing a proper headset adjustment.  This has been  something of a persistent difficulty with certain thinner wall --> larger I.D. steel steerers as it seems many star nuts are made for the thicker wall aluminum steerers.  A better suited replacement was installed. 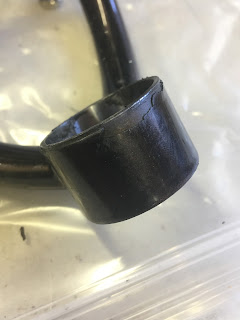 The second thing that caught my eye was the paint chipping away at the rack collar from the bottom (headset side).  This seemed quite unusual for something that should only butt against the top cap.... 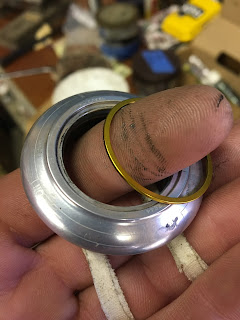 Ding. Ding. Ding.  There's the problem. The Cane Creek 110 headset leaves one thing to be desired in an otherwise great product.  For some reason they make this top cap to be compatible with their proprietary "Interloc" headset spacers.  Stupid.  This is no doubt a product of some overpaid engineer's mind; it goes a long way to solve a problem that simply doesn't exist, and takes it so far as wrapping it up in space food packaging commanding $5 a pop at lengths no greater than 5mm.  Now normal aluminum headset spacers would not typically be a problem here, but in the instance of the truss rack it uses thinner wall --> smaller O.D. 4130 than does the lighter aluminum counterpart, and was of just small enough outer diameter to start to slip inside the interlock groove, hence the paint wear.  Cane Creek "remedies" this condition on their 110 series headsets (but not their 40 series headsets) by providing this small but magical gold ring to fill the void, or as the case may be to be lost in the vacuum of time and space.  Ray's Tourer was missing that piece of magic for one reason or another.  Again, normally not a problem... 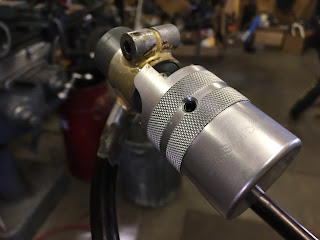 I had considered the binder bolt in the original construction of this rack but opted out thinking it would be unnecessary and that the clamping force from the headset adjustment would be enough to pinch that upper attachment, and that the binder would be unsightly and excessive.  I continued to consider it through subsequent rack builds, and finally I caved on the binder, retrofitting one to this original after deciding to do this to my personal rack this past year. 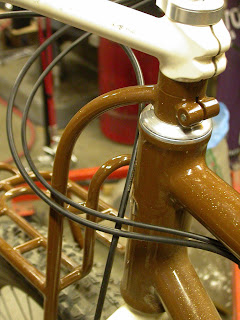 To paraphrase one commentator: the upper attachment of this truss assembly exists in part as a tie off point to eliminate the rotational swagger created by inertia of top loaded the gear under steering forces.  He understood completely.  It also helps to distribute the braking forces put into a 3 inch tire with a 180 pound rider and another 40-50 pounds of gear.  The more I pondered this the less the loose slip fit of the upper attachment as a headset spacer alone seemed to be sufficient at performing either task.  I have since opted for the binder.


Now for the upgrades: 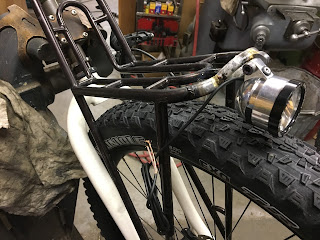 Ray and I liken this to the Pre-Runner Package.  New full floating rear axle with 11-50 wide range cassette, beefy tires for fast rolling in the dusty conditons, a baja style light bar, and a generator to power that stereo and run those lights.  The wheelset makes a remarkable difference in the responsiveness of the bike and all in all we landed pleasantly forward of where we started. The Kooks got the better of him down under, and well, kook on! 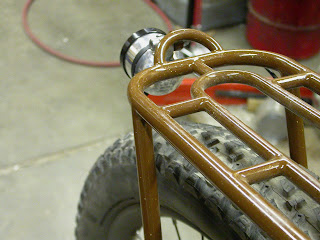 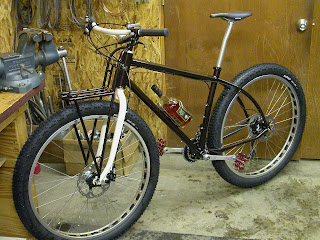 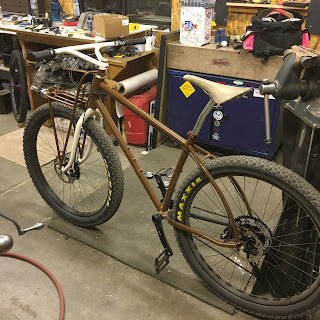 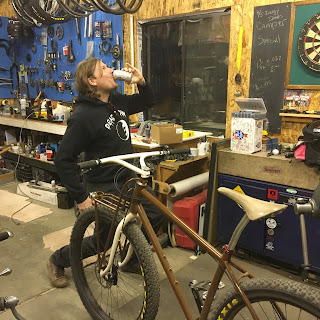