I've been mixing two or more projects this winter...well...tow major projects and I can never keep track of how many minor projects, but you've likely read about some of them if you follow along here, and plenty of these minor projects are just small steps in advancing the greater offerings of the Moustache Shop.  I posted about the plate crown fork several months back as it was an accomplishment in retro-technology and the first step in building up the Dapper Dasher.  A little background is due here: 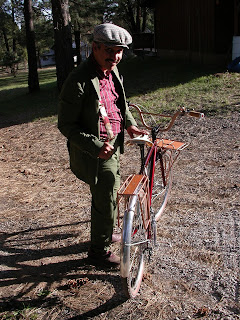 Dapper Dre is the one character I know that has the whims of our city wrapped around his finger.  The city makes a move towards progress and development, Dre has been waiting at the corner for this very moment to throw mud in her face with a smug grin and then roll in it right along side her.  He exists symbiotically with a city trying to grow despite its many constraints.  His lifestyle has grown from simple but ridiculous events that light a fire underneath the public to bring out their best both in dress and in character to inspiring our public through his antics on both on stage and on the internet.  His enterprises have grown from famed purveyor of costume attire to celebrity entertainer, but nothing has been left behind.  The wave of Dapper Dre is growing in intensity.  I never took Dre as the custom bike type, but Dre has not owned a car in the ten years I've known him.  This bike is not my typical commission, its the bike to carry a vintage lifestyle into the great unknown space of the future.  Traveller of retro-space.  Class was to be considered on all fronts. 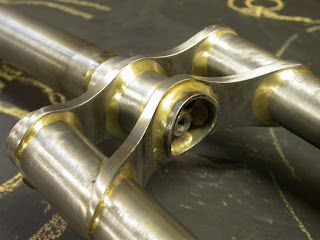 After the plate crown fork, the frame was a sigh of relief: simple diamond frame for modern accoutrements like 650B wheels with disc brakes.  Everything you wanted in 1985 but maybe didn't know about.  Room for 45mm tires with fenders or 2.2" tires without.  Northern Arizona is a rocky place, even if you're just on a commute.  The position is one for comfort over the long haul, and with back pain riders like to be upright, so the cruiser bar project came about mid-build and has proved a worthy endeavor.  The handling is stable and predictable thanks to the slack angles, upright position, a long rake fork, and a high-ish bottom bracket keeps pedals off the rocks when travel turns to raw earth. 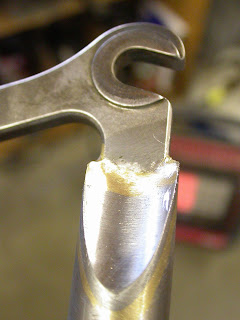 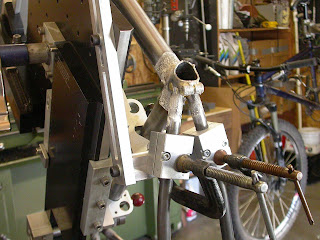 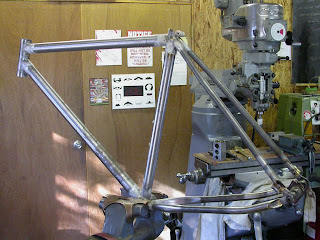 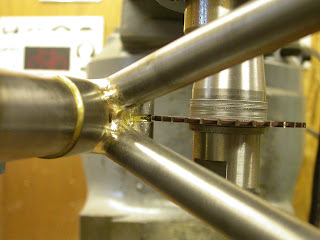 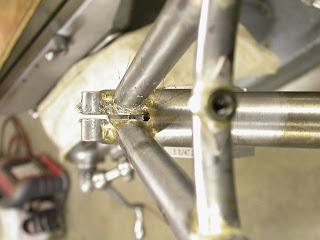 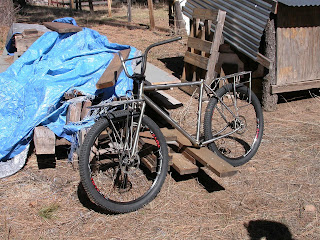 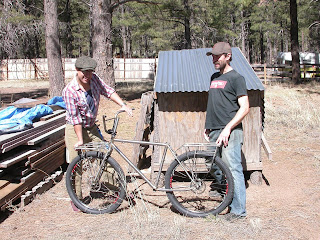 Bikes work out best when there is a cohesive plan from the inception and this one had it right down to the color scheme.  Burgundy with copper accents, silver and black components mix meeting at the crankset.  The burgundy color was achieved by putting down a sparkly layer of cosmic blue with a candy red top coat.  You can see the blue coming out with the tap.  Certain lights bring out the combination as a vibrant purple.  Remember your color mixtures kids. 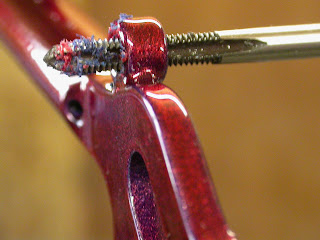 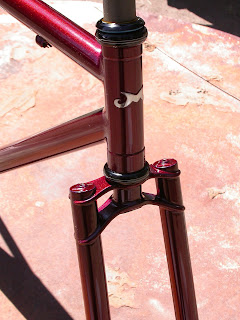 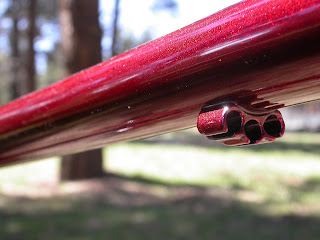 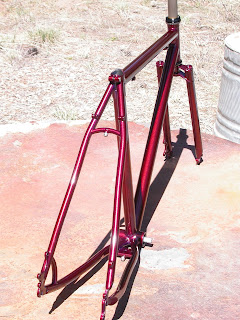 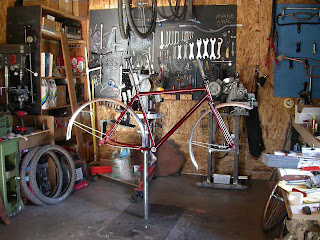 The build for this bike had to match the rider's taste for vintage.  I chose to represent this with the best parts available from all times past and present.  The wheels are 36 hole Velocity Atlas touring rims in polished aluminum laced to my favorite: Hadley Hubs with Phil Wood custom cut spokes.  The hubs use Hadley's ti-bolt option in the rear for future adaptability in a potential trailer project with a traditional 9mm QR in the front and a bolt on skewer.  These hubs are brilliant, with excellent machining throughout, quick 72-point engagement from the titanium freehub body, adjustable bearing preload and simplicity in rebuiling.  The choice between shimano and sram xd drivers is also available. For this project we went with the Shimano option for back compatiblity with the NOS 8 speed m900 12-32 tooth cassette.  Oh yes!  This piece was matched to gray XTR derailleurs and mated to Suntour XC Pro top mount shifters.  The best in vintage mountain bike drivetrains. 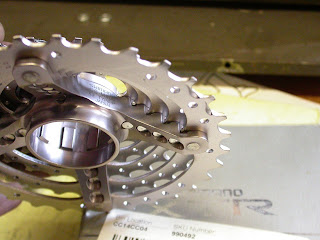 Further rounding out the build are Honjo aluminum fenders, Rivendell Fatty Rumpkin tires, Avid BB7 brakes with Speed Dial Ultimate levers.  If you're questioning the brakes, think about this:  before these came along you had the option of Hayes 22mm post mount hydraulics that were finicky at best...these brakes eased the transition from rim brakes to hydraulic discs in a simple and elegant manner that was easy for any average joe to grasp.  Paul components just now released a disc brake that is functionally a clone of this design that dates back, what, 16 years?  I'd say that's pretty timeless. 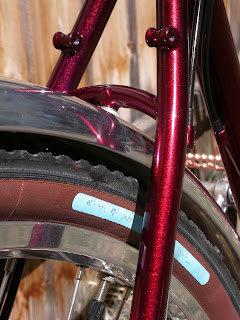 The rest of it was accomplished with a White Industries double crankset with a 26/40 tooth ring combo attached to a Phil Wood square taper bottom bracket.  Should be service free for at least the next five years, probably more like ten or fifteen.  Headset is a Cane Creek 110, and Thomson supplies the seatpost and BMX stem.  The seat is a Brooks kevlar and rubber model. 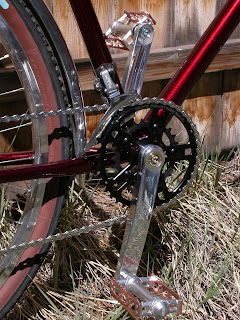 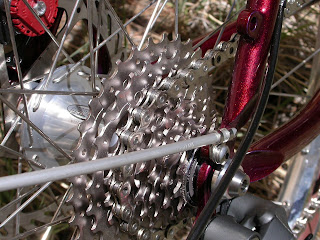 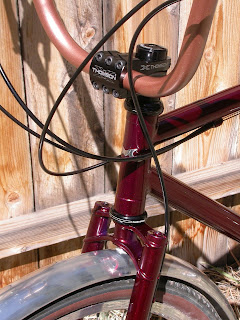 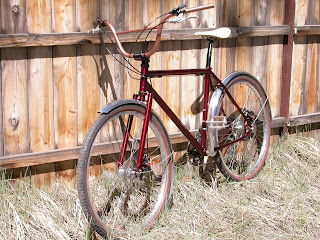 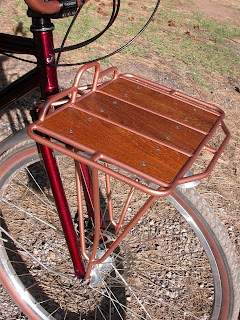 The racks were created to match the overall theme with wood inlays reminiscent of a flatbed pickup from the '60s.  The rear will accommodate standard panniers from any number of makers while the front is more aimed at a large cargo like a trunk. 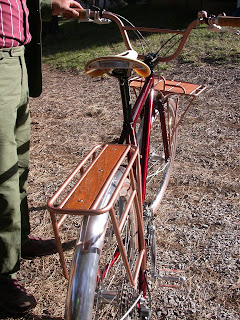 Upon receiving this bicycle, Dapper Dre turned up in production mode, cameras rolling.  The bike was unveiled from beneath a tarp and christened with the bubbly.  Champagne was sprayed about, coating that lovely red finish before being licked off by the man himself.  A hilarious spectacle.  Pee-wee quotes were quoted, and circles were ridden.  "Its not for sale Francis"